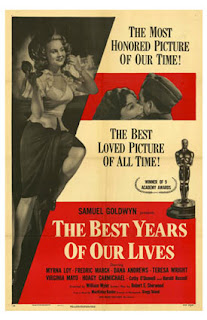 Theatrical Poster
There are so many movies about war, but not nearly as many that show life after war. One of the few classics on the post-war subject is the 1946 film, The Best Years of Our Lives. This Academy Award winning film tells the story of three veterans returning home from World War II and the challenges each one faces.
Fredric March plays Al Stephenson, an Army Sergeant who returns to his loving wife Milly (Myrna Loy) and their family. He was a successful bank executive before the war and when Al returns, he is promoted to Vice President. All seems good, except that Al is having trouble adapting back to civilian life and is now struggling with alcoholism.
Dana Andrews plays good looking Fred Derry, a soda jerk before the war and during the war an Air Force bombardier. After the war, Fred expects to get a better job upon returning home, but finds that he faces tough competition from other returning vets and that he lacks the necessary civilian skills. To make matters worse, Fred's wife has moved on to other men while Fred was away at war.
Harold Russell plays Homer Parrish, the quarterback of his football team before the war, who married his sweetheart Wilma (Cathy O'Donnell) before leaving to fight. Homer, a sailor in the war, lost both of his hands. When he returns home to his fiance and family, he has trouble adjusting to life with his disability. What troubles Homer most of all is that he feels that he will be a burden on his fiance, so he pushes her away, trying to give her a way out of their relationship.
The home that Fredric March's character returns to is an apartment building located at the corner of Beverly Boulevard and N. Sycamore Avenue in Los Angeles. It's a pretty nice building about a block from La Brea Avenue that looks like the kind of fancy place where a bank executive might live. Below is a screenshot of the building from the film and an image of the building as it appears today. 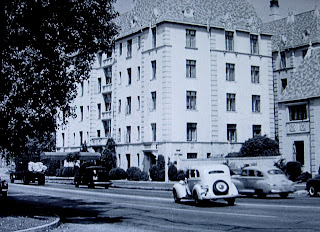 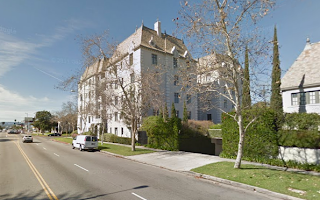 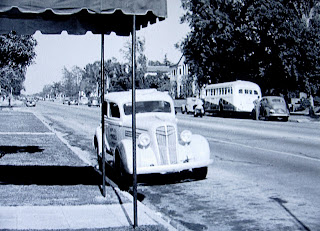 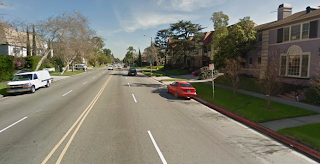 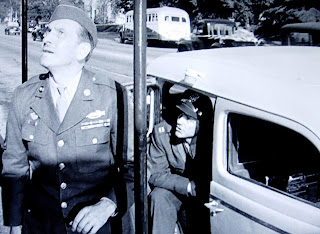 Fredric March returns home with Dana Andrews in the car.
The Best Years of Our Lives won seven Academy Awards, including Best Motion Picture, Best Director for William Wyler, and a Best Actor award for Fredric March. This film is currently available on DVD and it sounds like a blu-ray release is still TBA.
Posted by Robby Cress at 7:30 AM

Thanks for this! One of my favorite movies ever! I must take a drive over and see it on my next trip to L.A.!

Thanks for this! One of my favorite movies ever! I'll look forward to driving by on my next trip to L.A.!

I love checking out old movie locations and seeing how they've changed. So thank for this post and here's to many more!

What is the address on Beverly Blvd that Al's apartment is located?