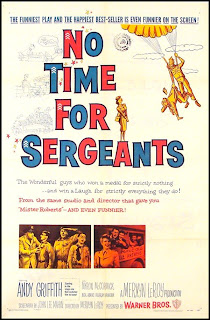 No Time For Sergeants stars Andy Griffith as a dim witted country bumpkin who gets drafted into the Air Force. Griffith's character, Will Stockdale, is similar to the character Forrest Gump, but whereas the people around Gump always benefited from his help, Stockdale always brings more trouble for those around him, especially Sergeant King, Stockdale's barracks sergeant. Sergeant King, a career military man who has found success by managing to stay under the radar by "not making waves" finds his steady career in jeopardy with simple minded Stockdale under his command.
Griffith is hilarious in this comedy. Yes, he could be funny on the Andy Griffith Show, but he is really, really funny in No Time For Sergeants. His comic timing and delivery are perfect. Myron McCormick, Nick Adams, and future Andy Griffith Show co-star Don Knotts also star in No Time For Sergeants.
In my post on the film locations for Suppose They Gave a War and Nobody Came? (1970), Tony Curtis is seen driving a bus onto Warner Bros. Midwest Street to pick up a group of military recruits. Twelve years earlier, the film No Time For Sergeants (1958) also used Midwest Street to serve the same purpose, but in No Time For Sergeants hillbilly Andy Griffith is getting picked up for military service.
Another difference between the two films: Suppose They Gave a War, in the scene where the recruits are waiting to be picked up, filmed from the front side of the Midwest Street white chapel building. In No Time For Sergeants, Griffith, Nick Adams and the other recruits wait to be picked up on the backside of the white chapel. 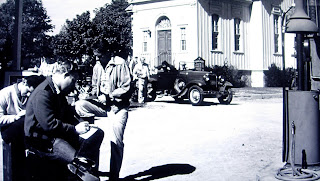 Recruits behind the white chapel on Midwest Street. 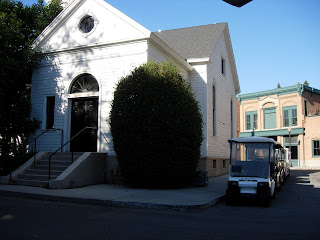 The white chapel on the Warner Bros. Midwest Street. 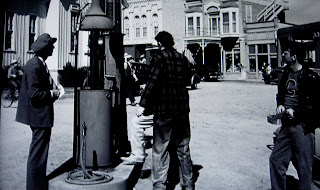 Griffith gets handcuffed to a gas pump near the chapel. 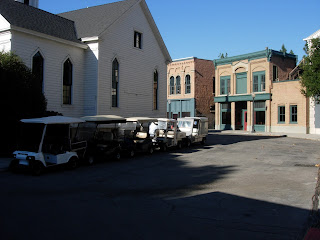 The gas pump would have been in the center of the street. 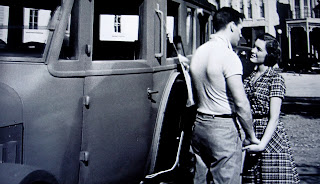 An Air Force recruit says goodbye to his sweetheart. 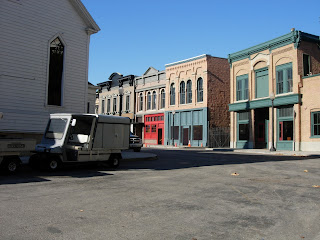 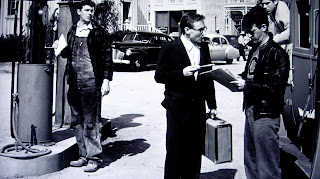 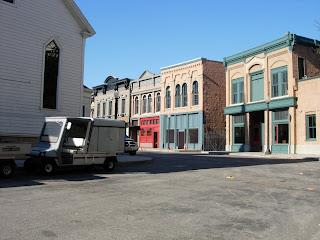 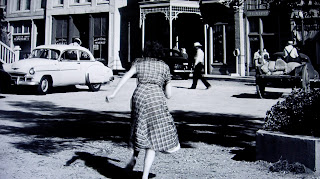 Another view behind the chapel. 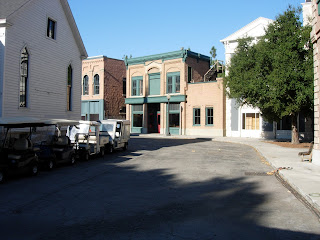 Looking behind the chapel as it appears today. 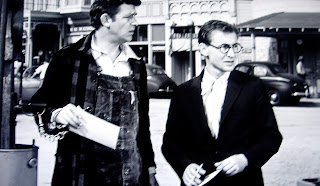 Griffith (Stockdale) and Adams (Whitledge)
Benjamin B. Whitledge: You ever had R.O.T.C.?
Will Stockdale: No..., but Irvin did! Close to a year of it. He's so 'ornary I think he still might have a touch of it.
Benjamin B. Whitledge: No, Will R.O.T.C. ain't a disease, its trainin'...Reserve, Officer's, Training...,uh...Corporation! 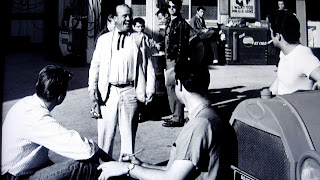 Another view behind the chapel as seen in
No Time For Sergeants. 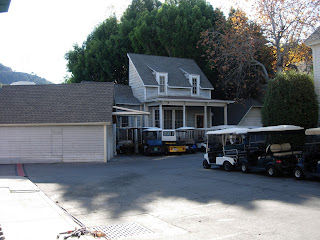 The same view as it appears today.
No Time For Sergeants is available on DVD. Have you seen it?
Posted by Robby Cress at 4:27 PM