Dean Martin at grand opening for Market Basket
Originally, I was going to post part two of The Big Fix (1978) film locations, but I decided to push that back to next week to make way for the swingin', crooning, Italoamericano, Dean Martin.
In the film Who's Been Sleeping in My Bed? (1963) Martin plays a doctor on a popular television show, particularly popular with female audiences. He is engaged to cute art teacher, Melissa Morris (Elizabeth Montgomery) who wants to get married but who is upset with Martin for delaying their wedding plans. Things get worse when all of the wives of Martin's poker playing friends, confusing Martin for his television persona, start coming to him for advice on their marital doldrums. Each encounter with his friends' wives makes Martin even more disenchanted with the idea of marriage and he decides to break his engagement with Melissa. With the help of her friend Stella (Carole Burnett), Melissa comes up with a plan to get Martin to propose to her again.
Who's Been Sleeping in My Bed? (1963) may not be one of Dean Martin's best films, but it does have some funny moments, especially a couple with a scene stealing Carole Burnett appearing in her film debut. Other notable stars supporting Martin include Jill St. John and Richard Conte. The film also features a few interesting film locations, including scenes at Paramount Studios, a Market Basket supermarket, and the Beverly Hills Hotel swimming pool.
The film starts with Dean Martin appearing as the celebrity TV doctor at the grand opening of a Market Basket supermarket. This was a grocery chain and the location used in the film was one that was once located at 11315 Ventura Boulevard, Studio City, California. Interesting to note is that this Studio City location had its grand opening in 1963, the same year as this film. The Market Basket supermarket is now gone and today the building is used as a Bally Total Fitness.

A crowd gathers at the Market Basket for the grand opening.
11315 Ventura Blvd, Studio City 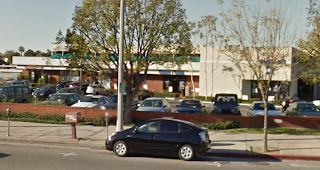 A view of the Market Basket parking lot. 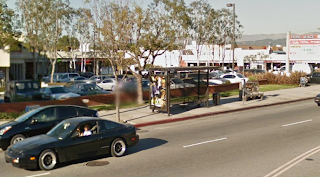 The parking lot as it appears today.

Another view of the parking lot as seen in the film.
After Martin makes his appearance at the Market Basket grand opening we see Martin take off in his car. While driving, Martin leaves Studio City behind and gets on the 405 freeway heading south. In the next comparison below, Martin is on the 405 freeway with a view of Sherman Oaks in the background.

Martin driving on the 405 Freeway. Sherman Oaks in background. 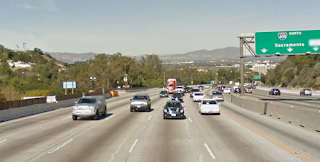 A present day view looking down the 405 towards Sherman Oaks.

The 405 freeway looking towards Sherman Oaks. 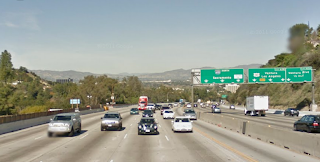 The 405 freeway looking towards Sherman Oaks.
Stella arranges a phony wedding for Melissa, hoping it will make Martin jealous. The scene takes place at the pool of the Beverly Hills Hotel, located at 9461 Sunset Boulevard, Beverly Hills, California. The pool area looks much different today. The hotel has expanded since the 1960s.

The Beverly Hills Hotel Pool as seen in the film. 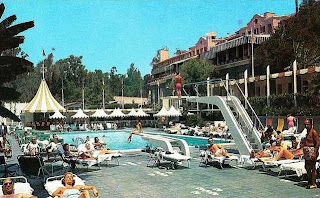 An old photograph of the pool maybe from the 1960s. 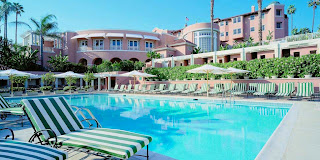 The pool as it appears today.
Photo from BeverlyHillsHotel.com

Burnett & Martin at the Beverly Hills Hotel pool.
There are a few scenes that take place on the Paramount Studios lot. It's at this studio where Martin's character films his television medical drama. All of the scenes were shot on what is known as "Avenue P" of the Paramount lot. 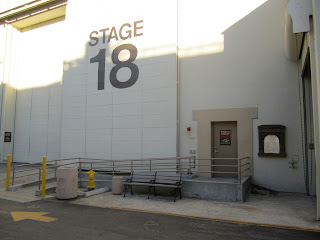 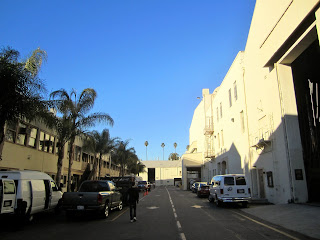 Looking down Avenue P as it appears today.
The next comparison is still of Avenue P but looking the other direction, away from the Hollywood Forever Cemetery border. On the left is the Medical Services building and straight ahead is the Lubitsch building.

The Paramount Studios Medical Services building as
seen in Who's Been Sleeping in My Bed? (1963) 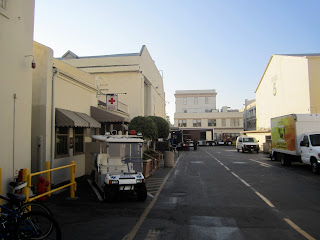 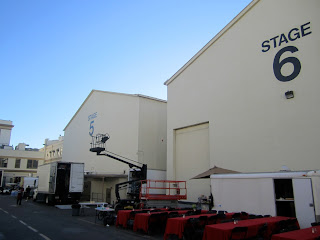 Stage 5 & 6 as they appear today.
This last comparison shows the beginning of Paramount's Avenue P, just past the historic Bronson Gate. Stage 4 can be seen straight ahead and Stage 2 and the Edith Head building can be seen on the right.

Looking towards Paramount's Stage 4 as seen in the film. 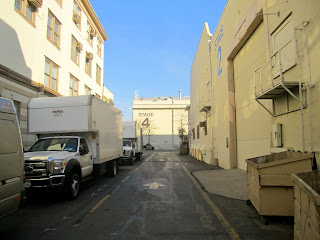 Looking towards stage 4 as it appears today.
Who's Been Sleeping in My Bed? (1963) is another Swinging Sixties sex comedy, similar to a couple other films I've covered here on Dear Old Hollywood: Sex and the Single Girl (1964) starring Tony Curtis, Natalie Wood, Henry Fonda, Lauran Bacall, and Mel Ferrer and Bachelor in Paradise (1961) starring Bob Hope and Lana Turner.
Thanks to my friend Chris Cottle for the photos at Paramount.
All StreetView images (c) 2011 Google.
Posted by Robby Cress at 11:25 AM

<3 I had seen this film on Netflix Instant a few weeks ago so seeing your post was quite a delight! As you said, it's not Dean Martin's best film but it's fun to watch. Great job pointing out all the locations, especially that pool. WOW!

Is that Market Basket the same chain that's around today? There is one in my town and several in Massachusetts. Looking at the logo they look similar.

I saw the opening of this film and was delighted by the Market Basket -- complete with the blue Van De Kamp's bakery sign visible above the door in your first "grand opening" photo.

Vintage grocery stores interest me, in general -- such fun to look at (I loved the stores in DOUBLE INDEMNITY and BACHELOR IN PARADISE) -- and perhaps my interest stems in part as many years ago my grandfather owned a small number of grocery stores in the Long Beach-Orange Co. area.

A wonderful job, as always!

I too have a fascination with early supermarkets. There is just something interesting about seeing the early food/product displays, logos, and graphics. I always like seeing what kinds of products were being promoted heavily - and the prices!

Thanks for stopping by. Glad you enjoyed this post.