When I watched the film The Hard Way (1943) I wanted to reach into the screen and slap actress Ida Lupino. Her character was just so unrelentingly ruthless. Lupino's performance was so believable that I couldn't help myself from hating her character. Add to that by contrast, supporting actors Dennis Morgan and Jack Carson seem like such good guys, it's hard to watch them being taken advantage of by Lupino. Although she wasn't nominated for an Oscar, at least the New York Film Critics recognized Lupino's strong performance by giving her a Best Actress award. And Lupino isn't the only one who turns in a strong performance. Both Carson and Morgan shine in their dramatic roles. With such great acting and an interesting gritty story, I'm surprised The Hard Way hasn't received more recognition.
If you enjoy manipulative backstabbing showbiz stories like the Bette Davis film All About Eve (1950), then you may want to give the lesser known The Hard Way a try. After not being available on DVD for quite a while it eventually was released as part of the Warner Archive collection. In The Hard Way, Lupino is the big sister who will do anything to make her little sister Katherine (Joan Leslie) a star, even if it means hurting other people in order to climb to the top of the showbiz ladder. Lupino acts almost like a stage mother. She lives vicariously through her younger sister's successes. In Morgan and Carson, a vaudeville duo, Lupino sees the men as an opportunity to propel Leslie's showbiz career and a chance for Lupino herself to escape her drab life in a sleepy steel town. When Leslie eventually becomes the toast of Broadway and no longer needs the help of Morgan and Carson, Lupino encourages Leslie to leave the two vaudevillians behind. Carson, who has fallen in love and has married Leslie, is especially struck hard by Lupino's manipulations.
The Hard Way was mostly filmed inside soundstages on the Warner Bros. lot in Burbank, California, although there are a couple exterior scenes that make use of the Warner Bros. backlot. In one scene near the beginning of the film, Leslie, who hasn't yet left the steel town of Green Hill to start her showbiz career is seen taking a class photo in front of her high school. The building that is used as Green Hill High School is actually a structure on Warner Bros. Midwest Street and is one of the earliest films I have noticed to have used Midwest Street. 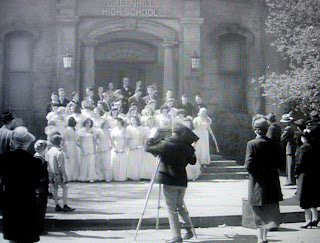 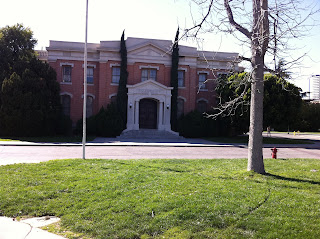 The same facade on Midwest Street as it appears today. 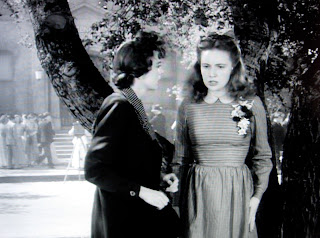 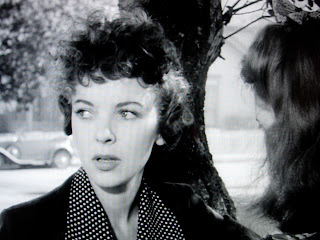 Another view of Midwest Street with Lupino and Leslie. 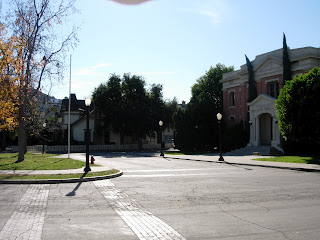 The view behind Lupino and Leslie as it appears now.
I believe the scene near the end of the film where Dennis Morgan looks for Leslie at a big New York theater was shot on the Warner Bros. New York Street. Below Morgan can be seen walking underneath a theater facade. 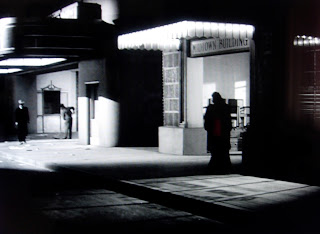 Morgan walks past a theater facade on New York Street. 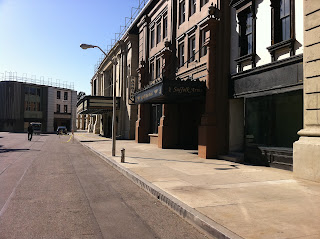 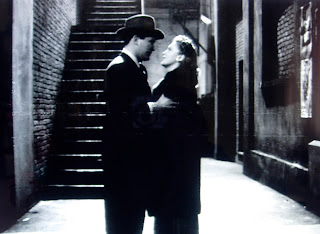 Morgan and Leslie in the alley on New York Street. 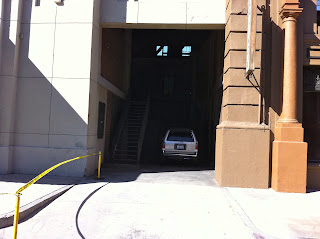 Looking into the alley on New York Street as it appears now.
The fun thing about being a classic film fan is discovering some of the enjoyable films that haven't received a lot of recognition, that don't get the regular praises as such classics as say Casablanca or Citizen Kane. The Hard Way may not be in the same class as those films, but it tries hard and deserves more attention.
Posted by Robby Cress at 4:44 PM

The Hard Way, is one of Lupino's strongest roles. It is too bad she didn't achieve the superstardom of Davis, Hepburn, or Stanwyck.

I will spotlight your awesome post next week end..

LOVED this film on late-night TV! It was so sad to see vicarious ruthlessness and stage-mother antics (by a sister) bring fame and fortune to Katie, while SO failing to pay off for anybody else at heart-level, where it truly counts. This classic story still gets played out backstage in real life today...