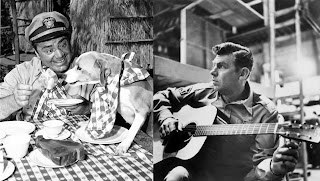 Sadly, earlier this month movie fans lost two more classic Hollywood stars: Andy Griffith on July 3 and Ernest Borgnine on July 8. During their long careers in both films and on television, I'm sure one could find many connections between these two actors. For one, both acted in an adaptation of the story From Here to Eternity. Borgnine played Sergeant 'Fatso' Judson in the 1953 film version and Griffith played General Barney Slater in a six part television mini-series. Both starred in successful 1960s television comedies: Griffith in The Andy Griffith Show and Borgnine in McHale's Navy. But, the one connection I'm thinking of involves Midwest Street on the Warner Bros. studio lot. 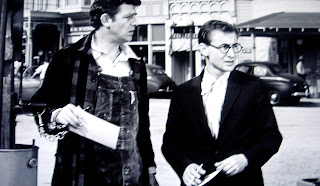 Griffith & Myron McCormick in No Time For Sergeants.

In the film No Time For Sergeants (1958) Griffith plays a country bumpkin who gets drafted into the Air Force. At the beginning of the film, Griffith is brought into town and handcuffed because he is considered a draft dodger. The town is Warner Bros. Midwest Street and the location is used as the pick up spot for all the new recruits who are going to be whisked away to the Air Force base. 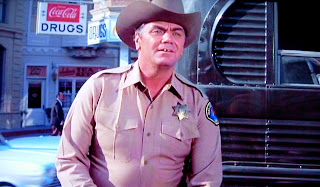 Borgnine in Suppose They Gave a War and Nobody Came?

I've previously done film location posts for both of these movies. You can see the locations for No Time For Sergeants here and for Suppose They Gave a War and Nobody Came? here.