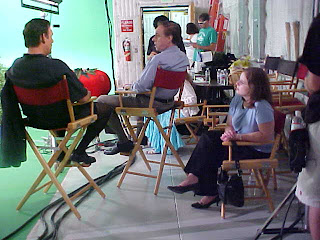 Above is a picture from the summer of 2005 of actor and first time director Robert Davi (left) sitting with writer, director, producer, actor, and author Peter Bogdanovich. The location is the set of the film, "The Dukes," Davi's directorial debut.
The film tells the story of a group of men, who in the 1960s were a doo-wop group (think Dion and the Belmonts) that were popular and successful, that now in the present are experiencing difficult times. The guys are now older, forgotten, and broke. When one of the men (Chazz Palminteri) loses his tooth and is forced to go to the dentist, Davi overhears a conversation about a group of dentists who share a large stash of dental gold. Desperate for money, these not-so-young men decide to pull a heist on the dental clinic. The rest is a comedic mess.
Here is the trailer for the film:
I had the opportunity to work as a product placement coordinator on the film and on the day the above picture was taken, the production was about to shoot a scene featuring "Guiltless Gourmet," a healthy snack food company I was representing. This was a hilarious scene featuring all the men dressed up as tomatoes and singing a doo wop song about salsa. The times of the band performing on the late shows are now over and the best gig the band's agent (Bogdanovich) could get is a poor commercial.
Here are some more pictures taken from the set that day.
Preparing to do the tomato dance: 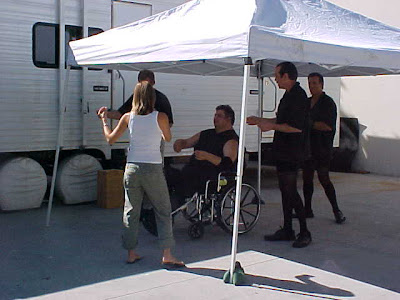 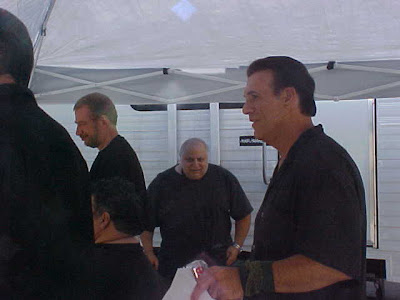 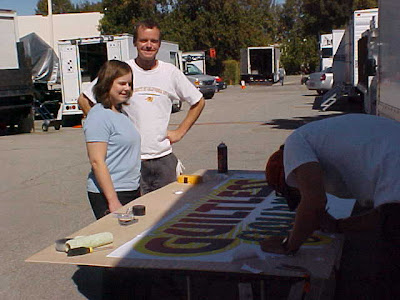 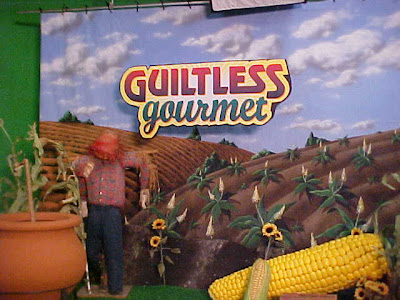 Me (When I was trying to sport a goatee. Yikes!) with Robert Davi. 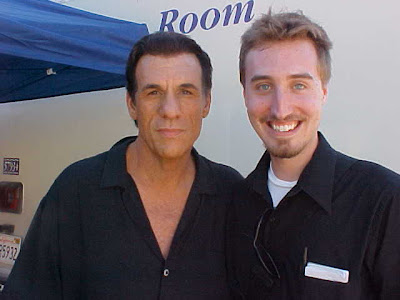 The film had a theatrical release in 2008. If you didn't get a chance to see "The Dukes" in theatres, don't worry, you will get a chance to see it soon on video and it is definitely worth checking out. The cast is great, the story is a bit different from other heist movies, and you can't go wrong with a soundtrack set to early 60s rock'n'roll.
Posted by Robby Cress at 4:33 PM

I always like Davi in movies and have looked forward to seeing this one ever since you worked on it.

Fantastic! I love behind the scenes action. And a big fan of Chazz.

DAVI IS SSSOOOOOO DAMN SEXY ,,,, THE DUKES SOUNDS GREAT--- MY GIRLFRIENDS ARE ALL LOOKING FORWARD TO GETTING IT WHEN IT COMES OUT,,,WE ARE AT COLLEGE AND HAVE A FEST --- JAKE FRATELLI GROWS UP ,,YUMMY

DAVI IS SSSOOOOOO DAMN SEXY ,,,, THE DUKES SOUNDS GREAT--- MY GIRLFRIENDS ARE ALL LOOKING FORWARD TO GETTING IT WHEN IT COMES OUT,,,WE ARE AT COLLEGE AND HAVE A FEST --- JAKE FRATELLI GROWS UP ,,YUMMY

i saw the trailer and i really want to see it!