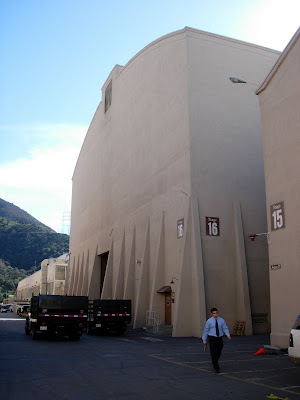 Business was good at Warner Bros. during the 1930s. In this decade Warner Bros. was best known for their gangster pictures such as Little Ceasar, Bullets or Ballots and Public Enemy as well as socially conscious films that found interest from an audience dealing with a major economic depression.
With the profits Warner Bros. made from these films they invested right back into the studio. During the 30s, nine new soundstages, the Mill Building and one exterior set, Midwest Street were built during this time. One notable building constructed was soundstage 16.
Stage 16 is one of the tallest soundstages in the world and is the tallest soundstage on the Warner Bros. lot. The building was completed in 1935 but that same year the entire structure was raised 30 feet to accommodate a colossal musical number from the Marion Davies and Clarke Gable film, Cain and Mabel. William Hearst, the American newspaper mogul and Davies' sugar daddy paid $100,000 to have the roof raised.
The movie's grand finale featured the tune "I'll sing You a Thousand Love Songs," was nine minutes long and cost $400,000 to shoot. The scenes shifted from the canals of Venice to the palace of Versailles. This all built up to a scene with a ninety-foot pipe organ in the background that opened to feature 160 chorus girls dressed as bridesmaids. 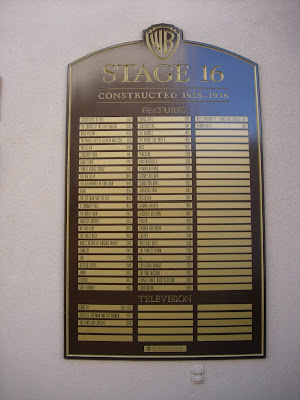 Each of the Warner Bros. soundstages feature a plaque like the one above listing some, but not all (Cain and Mable is surprisingly left off the list) of the films that were shot in here. Some of these include Yankee Doodle Dandy, The Big Sleep, My Fair Lady, Ghostbusters, Goonies (remember the pirate ship?), and most recently the latest Indian Jones film. Below is a picture of Jurrassic Park being filmed inside Stage 16. Check out the great website Jurassic Park Legacy for more photos. 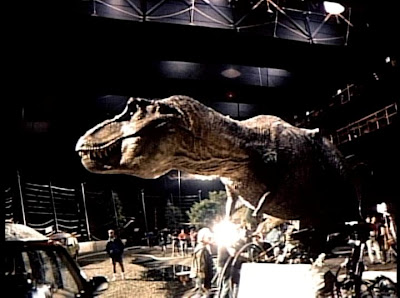 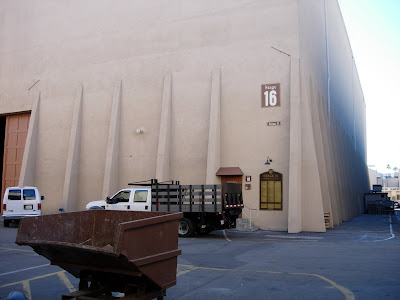 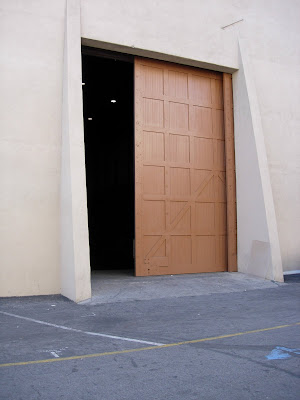 Above is one of the "elephant doors" to the soundstage. 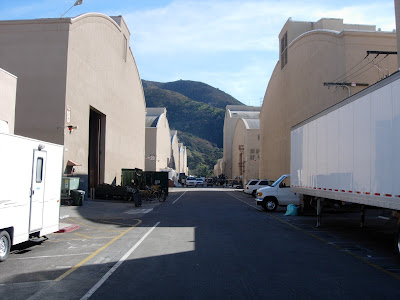 Soundstage 16 is the last building on the right. You can see that it is taller than the other soundstages.

Your blog is right up my street, I'll be back to read it all soon x

Interesting post Rob. Hopefully as studios merge and consolidate they do not forget their heritage and history. It's strange that they did not acknowledge the film that caused the sound stage to be built this way. Was the film a flop??

Speaking of not forgetting heritage and history, I just learned that at Paramount they tore down the Bing Crosby building, where the scoring stage was. There going to be building a new modern facility but it's unfortunate they couldn't refurbish the existing building.

On another note, back at WB, they tore down building 89 where they used to store grip equipment. It's sad that the building is gone but they have recycled all the douglas fir timbers and will be making desks, doors, and other materials from the recycled lumber - still wish the building was there though.

Hi, GREAT website! Thought you'd like to know there's an incredible sequence in "The Roaring Twenties" with James Cagney, which used the exterior of Stage 16 as a liquor warehouse! Cagney hides behind one of those slanted supports and shoots a night watchman. Sincerely, William Carroll, Denham Springs, Louisiana

I just visited this studio and this exact sound stage a month ago! The stage is so big, it's just unbelievable - I made my kids all walk in it and appreciate the size of it! I also saw Cain and Mabel recently - the scenes in the big stage are pretty spectacular.

Great stuff. I love the old movie history and especially the locations used.