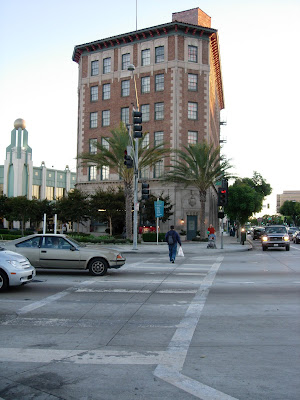 Culver Hotel - 9400 Culver Blvd, Culver City, CA
The Culver Hotel located in downtown Culver City, near the Sony Studios (formerly MGM) and the Culver Studios, has had many famous residents over the years including Joan Crawford, Douglas Fairbanks, Greta Garbo, Frank Sinatra and Ronald Reagan. However, the most famous guests to stay at this hotel would probably be the Munchkins from the 1939 film the Wizard of Oz.
The Munchkins were apparently a rowdy bunch. According to Judy Garland, "They got smashed every night and the police had to pick them up in butterfly nets." MGM Studios producer Mervyn Leroy had his own acerbic comment about the munchkins saying, "They got into sex orgies at the hotel. We had to have police on every floor." Bert Lahr, the "cowardly lion" had this to say about the munchkins: "Many of the Munchkins were midgets who, in fact, made their living by panhandling, pimping and whoring. Assistants were ordered to watch the crew of midgets, who brandished knives and often conceived passions for other, larger Metro personnel." Most of the comments were likely untrue or exaggerated, nevertheless, they make for interesting stories.
Another legend has it that Charlie Chaplin who was once a part owner of the Culver Hotel sold the place to actor John Wayne for a dollar during a poker game. I'm not quite sure about the validity of this comment but it makes for another great tale. 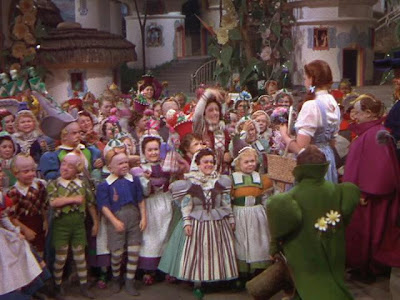 Wizard of Oz (C) MGM Studios
In addition to housing visitors the Culver Hotel has also been used for filming. The hotel can be seen in old Laurel & Hardy and Our Gang Shorts and relatively more recently in The Wonder Years and 7th Heaven.
If you want to visit the hotel but don't want to stay the night there is a great bar in the lobby. Stop in to have a drink and check out some of the Wizard of Oz, Laurel & Hardy, and Our Gang memorabilia displayed in the ground floor windows.
Posted by Robby Cress at 7:09 PM

hahaha! I enjoyed this one

Great post Robby! I used to live in West LA for a hot second a few blocks from here. I loved to take my walks past here then down towards Paramount... Of course I imagined it to be MGM as it once was in all it's glory. Anyway- in the windows of the Culver Hotel's restaraunt/bar they have cut out heads of the old stars and they were fadded by the sun. I always liked walking by and looking at them.

Funny about the butterfly nets!!!

Thanks Katie :)The area is a great neighborhood. I like that it's an area that is very walker friendly.

Funny enough I didn't start questioning your quoted until I got to the lion... I hope that my being naïve is a bit of my charm, otherwise I would have run away to some distant jungles in Cambodia.

But really, the Garland quote is not ENTIRELY unlikely... she was a mental case, eh? And producers say what they want to say, just thought you got lucky to come over an un-cencored quote! ;)

Great post on the Culver Hotel. We dropped in at the lobby bar about a year ago and had a great time. There's live music every night, generally jazz or retro pop. And in addition to viewing Old Hollywood memorabilia, you can watch silent films of Laurel & Hardy, Charlie Chaplin, and projected on one of the walls; many exterior shots in the films show the hotel itself.

You can see more pictures in my own blog post here

Link to my blog post on downtown Culver City, with numerous pictures in and around the hotel: