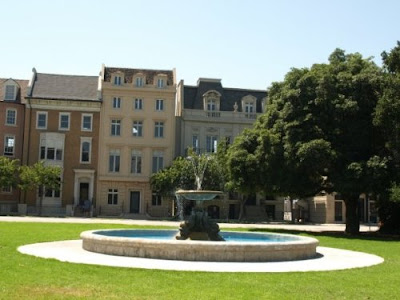 Photo from How the Ranch Was Weathered
Just north of the Warner Bros. Studio lot is another, much smaller, studio lot known as the Warner Bros. Ranch. It was originally called the Colombia Ranch after the studio that founded the facility. Unlike the WB Studio, the Ranch is not open to the public, so if you would like to get a glimpse of what the Ranch lot looks like the folks over at How the Ranch Was Weathered have a pretty nice photo tour. Check it out here.
The How the Ranch Was Weathered group was made up of fans of the classic television show Betwitched, so the view of the lot is photographed from that perspective. In addition to Bewitched many other titles were shot here: National Lampoon's Vacation, Pee Wee's Big Adventure, Pleasantville, Friends, Dennis the Menace (tv show), I Dream of Jeannie, and Partridge Family just to name a few.
Posted by Robby Cress at 8:24 AM

kepp writing I am enjoying your pearls of wisdom x

Wow Rob, nice link. I found thst really interesting. they were some of my favorite shows back then.

I was actually wondering how I could get this tour. I know WB has their small tours (120 people daily) but does it include the ranch with the Friends fountain and the Bewitched homes?

Please let me know, I have been itching to head over there to check it out!

Sorry Neebski, unfortunately the Warner Ranch is not open to the public and the WB VIP Studio Tour does not include a trip to the Ranch. The only way to view the Ranch is to either work there or know someone who does.

Although, I've sometimes noticed that those people that stand outside of movie theaters and hand out flyers to attend test audience screenings have listed the screening room on the Warner Ranch as location. If you live in the Los Angeles area you might have the chance to get on the lot by going to a test screening.

I had the run of it for a week once and it is kinda sad, but still gives me a vibe thinking the "Monkee's" romped there.

The manley's have been in the film industry for many years. My husband aunt was Nellie Marie Manley 30 years at Paramount as Head Hair Supervisior. My husband was visiting his aunt and his wife at that time they were going on a studio tour. He was asked if he would come to the office, he felt strange because he did not know this person. He asked him to wait and his former wife took the tour.
The fellow was Bill Schlatter,He came back with several other people from the studio, your not him? No!, then they heard a female voice calling. A fellow step up and said put this jacket on and if any one ask you anything just shrug and grunt. A women came up put her right arm around him and said they want you down below. He grunted, shruged she kiss me on the cheek and walked away. Turned and said your not my husband No! He was hired by them to assist both of them and through out the years when he was away from my regular job, He was their friend and stunt double Jocco

Kenneth Robert Manley, was one of a kind, old school so to speak. Yes and also Nellie was his aunt and in her time Paramount was her play ground.He would come to the different sets and then one day he met Bill, Chuck, Chris and that was the day of his 15 minutes of fame.The fellow who asked him to put on the jacket was Charles Dennis Buchinsky aka Charles Bronson. Charles was claustrophobic
they became close friends and on some days even Jill could not tell them apart.They entered into an agreement and he work 14 of his films, and they remained very close all those years. Contract was for uncredited stunt work.

Great little article! So many more shows and movies were filmed on this wonderful and historic Back-Lot. High Noon, The Wild One to name just a few. Check out The Columbiaranch Wesbite for the complete history!