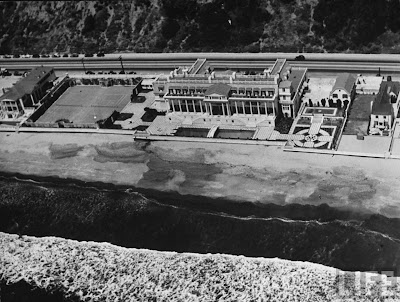 Marion Davies beach estate, Santa Monica, CA
The former Santa Monica beachfront estate of silent film actress Marion Davies opened Saturday as the nation's first public beach club. The new Annenberg Community Beach House, just off the Pacific Coast Highway, has been in the works for more than 10 years. The facility which includes volleyball and tennis courts, cafe, playground and swimming pool, is the only such facility on the California coast that doesn't require membership. That pool by the way is the same marble-tiled pool that Davies used to entertain her celebrity friends.
The 5-acre estate was built in the late 1920s by newspaper mogul William Randolph Hearts, for Davies, who he was having a long-term affair. During the 1920s and 1930s the two would host many of their lavish parties at this 110-room mansion. The guest list would include the biggest celebrities of the time, including such names as Charlie Chaplin, Joan Crawford, Clark Gable, Gloria Swanson, and Cary Grant.
By 1945 the property was sold and run as a hotel. However, the hotel would fail and in 1959 the mansion was torn down and the property sold to the State of California. Over the next 30 years the property was operated as a private beach club. Then in 1994, when the Northridge Earthquake shook Los Angeles, the property was severely damaged. The place remained dormant until yesterday, after the Annenberg Foundation funded a project to repair the remaining structures which include the historic pool and guest house (the only original remaining structures) and the construction of several new structures including a pool house and event building.
Fees to attend the newly opened facility cost $3 to $10
Posted by Robby Cress at 10:15 AM

oh how truly fabulous! to actually swim the same pool that used to be the frolicking playground for davies and chaplin and the fairbankses and countless others! thanks for the post!

All thats left is the building on the far left of the picture (the tennis court is between it and the main house). My God its huge and has like 5 bathrooms and servants quarters...and it was ONE of THREE guest houses! It also had its own mini pool, but they were unable to restore that part. The main houses pool is still there though. Pictures: http://www.flickr.com/photos/acbh/

kittypackard - I know, it's pretty wild to think that we can go swimming in the same pool as those Hollywood legends.

hala pickford - thanks for the link with the photos. It's too bad that more of the property doesn't exist.

I paid a visit to the new community center, and the restored pool and Guest House. It's amazing. The best deal on the beach for a pleasant day.
When June gloom ends, i plan to become a fixture!!!

It's great to live in Santa Monica.
Check out the Marion Davies Estate back in the day @ http://www.santamonicalandmarks.com/landmk12.html