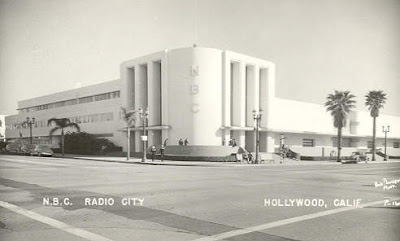 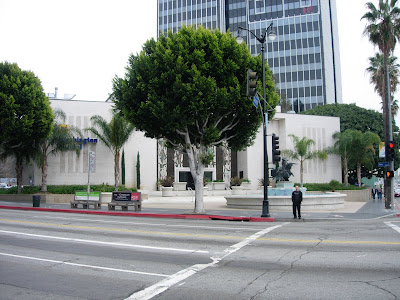 NBC Studios site 2009, Sunset & Vine Hollywood
Above are photos of the NBC Radio Studios lot during the 1940s and how the location appears today. During the 1930s all the major radio networks in New York City began opening up west coast locations in this area of Hollywood. NBC first had a west coast radio studio in 1937 located on Melrose Avenue near the Paramount and RKO studios. This studio had two small stages with seats for live audiences. However, when CBS opened a much larger studio NBC decided to build a new a larger state-of-the-art radio studio located at the corner of Sunset Boulevard and Vine Street. The building, which opened in 1938 was a stylish streamlined art deco structure with eight studios and a three story office building.
However, like many historical structures in Hollywood the NBC Radio Studio in Hollywood would be demolished. Today there is a Washington Mutual bank (now a Chace bank?) on the corner. Also, notice how much smaller the palm trees are in the old photograph and the difference in the skyline.
Radio show guests and performers who were visiting would sometimes stay at the Plaza Hotel just up the street. That building is still standing. Also neighboring the NBC Radio Studios and the Plaza Hotel was the popular Brown Derby restaurant where all the big Hollywood stars dined. However, this Brown Derby has been demolished.
Posted by Robby Cress at 7:32 PM

Wasn't that also the location of the Famous Players-Lasky studios until about 1930ish? If you look on the bank theres a mural dedicated to silent film...Greta and Valentino and Mary and so forth. Kinda neat but hard to get pics of.

I'm always fascinated in reading about buildings Then & Now, even though one often finds that a lot of old buildings have been taken down!

Yes, you're right! A few decades before NBC occupied this lot it was the home of Famous Players-Lasky studio which would later become Paramount. The studio started on the corner of Selma and Vine and then quickly expanded from there with different stages and backlot structures.

I'm glad you enjoy the blog Sebina. Thanks for stopping by :)

i love the 'before' and 'after' shots of LA.
you have a great blog - love reading it!
xox

I love your blog!

Before this building opened in 1938, NBC radio was west coast was headquartered in San Francisco, in a facility called Radio City West on Sutter.

After the move to Hollywood, NBC had a new building built in San Francisco in 1942; it was not owned, but leased, by NBC. This building is officially NBC Radio City West. NBC radio moved to another location in 1967.

Any chance that NBC has employee records from the 1940s or 50?