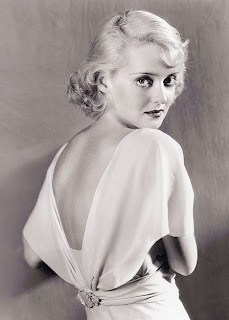 Bette Davis
When Bette Davis left the east coast for Hollywood she brought her mother Ruthie and sister Bobby along with her. The three of them, for whatever reason, couldn't seem to stay put for very long. Davis and her family moved to several different residences during her early days in Hollywood and below are a few of the locations the Davis family spent time. 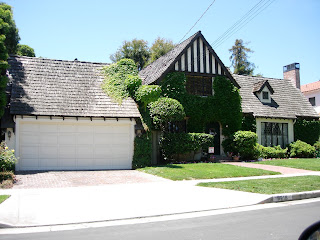 9918 Toluca Lake Avenue
In April of 1932, Bette, Ruthie and Bobby moved into the large Tudor home seen above, which belonged to actor Charles Farrell. The house, located in the posh Toluca Lake neighborhood, was just around the corner from the Warner Bros. Studio in Burbank where Davis worked and had a yard that lead down to the Toluca Lake. The Davis's didn't stay in this nice home for very long. By June, the family was moving to a house at 135 Zuma, in Malibu. 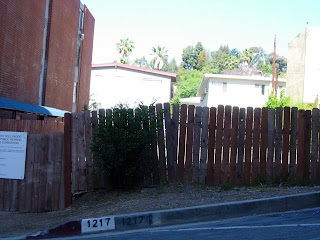 1217 Horn Ave, West Hollywood
After Bette Davis was married, Davis, her husband Ham, along with Ruthie and Bobby, moved into a house at 1217 Horn Avenue, in West Hollywood. According to the book Dark Victory: The Life of Bette Davis, the "house actually comprised two buildings - as Bette describes it, 'a white, ivy-covered little English house' in front for the newlyweds and a guesthouse in the back for the bride's mother and sister." As you can see in my photo above, 1217 Horn Avenue is currently a vacant lot. 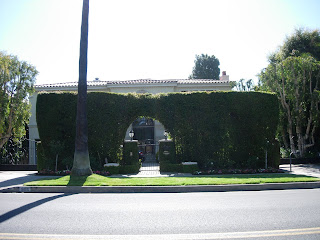 906 N. Beverly Drive, Beverly Hills
Bette's sister Bobby would suffer a nervous breakdown and eventually move back east with Ruthie. Bette and Ham would continue to move around town. One of these residences was a large home on Beverly Drive in Beverly Hills - right across the street from the Beverly Hills Hotel. Above and below are photos showing the home at this address today. I'm not sure if this is the same building that Bette lived in or if it was torn down and replaced with a new building - but this is what you will find at this address today. 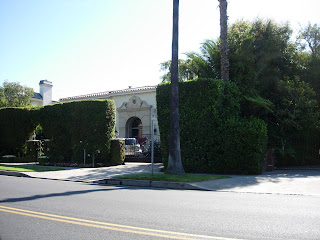 906 N. Beverly Drive, Beverly Hills
From the Beverly Drive home, Bette and Ham would next move into a house at 5346 Franklin Avenue in the Los Feliz neighborhood. Below is a photo I took showing the home today. According to the real estate website Trulia, the home was built in 1911 and is a 1 bedroom, 1 bathroom house - not really the big home you would expect Bette Davis to live in. 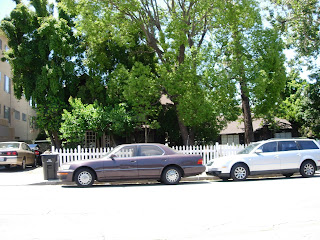 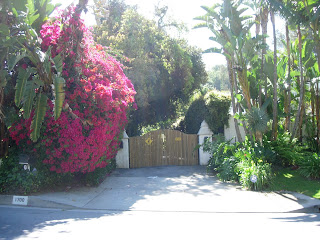 1700 Coldwater Canyon, Beverly Hills
I'm sure Bette and Ham moved several more times after the house on Franklin Avenue. By 1937, Bette and Ham moved into a home at 1700 Coldwater Canyon, in Beverly Hills. According to the book Dark Victory, the Coldwater Canyon home was, "a hacienda-style house complete with a swimming pool, tennis court, and an acre of land." Above is a photo looking at the entrance to the home. As you can see, whoever the current owners are, they have let the shrubbery grow to block the view of the home. By the time work would start on the film Jezebel, Bette was still living in this home but Ham was spending most of his time in New York.
Posted by Robby Cress at 3:53 PM

Great post, Robbie. I always enjoy driving around Beverly Hills when we are out that way on vacation.
Robin

I can't believe I haven't come across your blog sooner, Robby! I live for this stuff! Thanks for putting so much work into hunting down these locations.

Using some of your photos and research, and some of my own, I've put together a Double Indemnity location tour. Let me know if you'd like to see the doc.

Oh and have you seen the 1949 noir Criss-Cross w/Burt Lancaster, Yvonne DeCarlo & Dan Duryea? Some fabulous L.A. locations in that one...

Thanks for the kind comment Sloan. Glad you could find your way over here.

As for Criss Cross - would love to do a post on that someday. I only wish Bunker Hill, where some of the film was shot, wasn't leveled and changed beyond recognition.

I know, it's heartbreaking! I work on Bunker Hill, and I'm always looking at photos of how it used to be. No one would ever guess it's the same plot of land.

At least the Angel's Flight is up and running again, if in a different location than it appeared in Criss-Cross. Also, Union Station makes a beautiful noir backdrop. We still have quite a few landmarks around!

Thumbs up on this post, Robby! Illuminating, as always! :)

I wonder why she didnt stay too long in the Toluca Lake house. It looks lovely, it must have been a very nice place to live back in the 30s.
I loved this post, you have an awesome blog.

I love your blog! Bette Davis + loads of vintage stuff about Hollywood= <3

I wish I could've discovered it earlier though :(

Another great journey you took us on!! Great photo of Bette, as well.

Sloan.....where do you have your double indemnity location tour?? I live in the building that was used as Fred MacMurray's apartment building..

Great post! Bette Davis is one of my favourite actors to watch on screen, so it's amazing to see different places which called home at one time or another! It's like a peak into her personal life. Sometimes I forget that these classic actors were only human!

Great post! Bette Davis is one of my favourite actors to watch on screen, so it's amazing to see different places which called home at one time or another! It's like a peak into her personal life. Sometimes I forget that these classic actors were only human!

Enjoyable post. 1700 Coldwater Canyon is owned and occupied by Carrie Fisher-1720-next lot is lived in by Debbie Reynolds.

Many thanks for that tidbit. Very interesting that the Coldwater Canyon home is maintiaing it's Hollywood pedigree. I wonder if the fact that Bette Davis owned this home previously influenced Carrie Fisher's decision in owning this particular home.


I stumbled upon your blog about the 5346 Franklin Ave house. I live in that house, and the trulia information is not correct. The house actually has 2 very large bedrooms, 2 bathrooms, 3 "other" rooms, I say "other" because 1 is an indoor sunroom, just off the upstairs bathroom. Another is a downstairs sunroom just off the kitchen, which is currently an office, and the other we call "the church room" because of its vaulted ceilings and pseudo stained glass windows, which is currently set up as a recording studio. Additionally there is of course a living room, dining room, walk in pantry, and a basement. Perhaps most interesting is that in the stairwell, there is original wall paper that Bette Davis herself put up. The house is about 3,000 square feet and has a LOT of of character and charm!

Another piece of interesting history behind this house is that it was designed, built, and was the personal home of famed architect Arthur Kelley, (or maybe Kelly), whom designed and built the Playboy Mansion, Huntington Beach High School, and many other well known hollywood homes / buildings. He built this house, the house next to it, and there was a 3rd house which mirrored this one, which has since been torn town and replaced with an apartment complex. Behind this house is also a carriage house, shop, etc. The property is pretty large.

I can only imagine the history that this home has to share if only it could speak, considering it is over 100 years old and once occupied Bette and all of her old hollywood friends.

Thanks for your comment and all of those wonderful tidbits on Bette's Franklin Ave home! If only those walls could speak, I'm sure there would be many entertaining stories to be heard. Nice to hear that the stairwell has some of the original wall paper that Bette put up. What a nice reminder of the home's history to walk by every day.

Update on the Horn Ave Lot -- they are building a new building on this lot -- the framing is already constructed.

Does anyone know if the house that Bette rented when she first arrived in Hollywood is still standing? It's on Alta Loma Terrace near the Hollywood Bowl.

The home T 6655 Alta Loma Terrace an old English Cottage that Bette Davis loved was razed to the ground after a long legal battle with the owner of the home bar tender Steve Anthony and the LA government. On the evening of April 13, 1964 Mr. Anthony and his family where forced out of their home and he was taken to jail as the house was emptied of its contents and plowed to the ground to make way for part of the Hollywood Bowl parking lot.

Did Bette Davis ever live at 6109 afton place Hollywood, ca.?

Did Bette Davis ever live at 6109 afton place Hollywood, ca.?

Does anyone know when Bette Davis lived at 1705 Rancho Ave in Glendale? The park next to her home is Bette Davis park. Thanks!

Someone told me that Bette Davis had a camp in Tupper Lake, NY which is in the Adirondack Mountains. Can anyone confirm that?