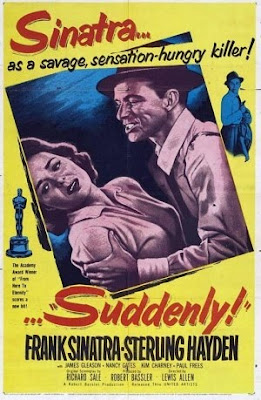 Suddenly (1954)
In the film Suddenly (1954), Frank Sinatra leads a group of assassins who are preparing to shoot the president of the United States when he is scheduled to arrive in the small town of Suddenly, California. To do this, Sinatra and his henchman locate a home up on a hill that looks down at the train station where the president is expected to arrive. There, Sinatra and his gang take the family living in the home hostage and set up a sniper rifle aimed out the window facing the train station. When the president arrives at the train depot, Sinatra will be ready to take his shot.
Last week I set out to visit the town of Suddenly, which is really the small town of Newhall, California, about 30 miles north of downtown Los Angeles, hoping to track down some of the locations from this Sinatra film.  I did find a few locations, however, a lot has changed in Newhall since the film was made. The train depot still exists, but was moved to a new area of the city and some of the businesses seen in the film no longer exists. Below are few locations I did find. 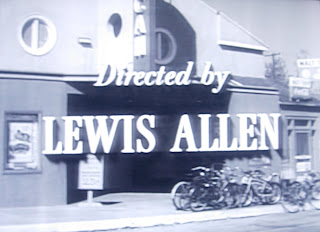 American Theatre, Newhall, Ca
The film opens with a montage of the town. One of the buildings that we see is the old American Theatre located at 24527 Spruce Street. The theatre, which was built by the western film star William S. Hart, opened in 1941 and operated as a theatre until 1965. Today the building still stands and is currently the local American Legion Hall. 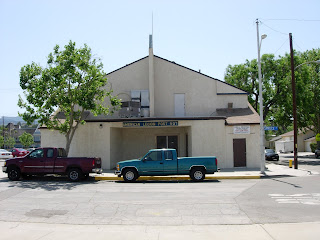 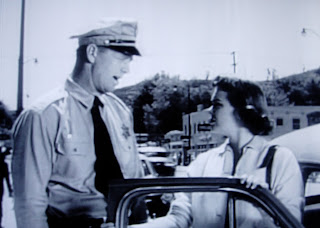 Main Street, Suddenly (1954)
Above is a view of Main Street as seen in Suddenly and below is a view looking down the same street today. If you look in the background you can match up the mountains. This area is now known as old towne Newhall and is filled with small town shops and restaurants, however, some of the buildings that can be seen in Suddenly are no longer standing. 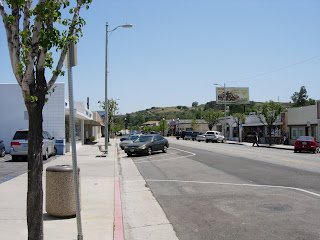 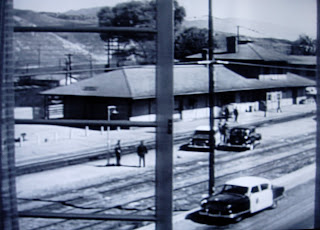 Suddenly (1954) Train Station
Above is the train station where Sinatra has his rifle aimed as he waits for the president to arrive. The train station is still standing but it has been moved about 3 miles from the original location. The train station is now located at 24101 Newhall, Avenue and serves as the headquarters for the Santa Clarita Valley Historical Society (SCVHS). Thanks to Barbara at the SCVHS for her help in answering some of my location questions! 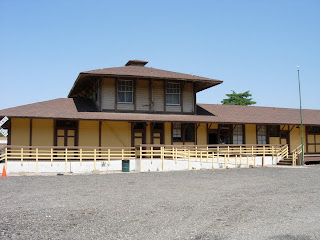 Santa Clarita Valley Historical Society , Newhall, CA
According to Barbara, there was no home in the hill that looked down at the train station. To create the illusion that there was a home on a hill, the film crew built a tower with a window and filmed Sinatra looking through the fake window. 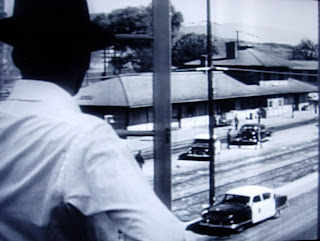 Sinatra looks out at the train station.
The Santa Clarita Valley Historical Society will be presenting a screening of the film Suddenly at the same train station seen in the film. The screening is on Saturday, June 12 and the cost is $5.  In addition, they will be showing the silent Mary Pickford film, Ramona, which was also filmed in the area. For more details click here. 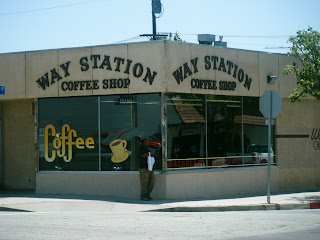 Way Station Coffee Shop
If you make the trip out to Newhall and you're looking for a great place to eat, I definitely recommend the Way Station Coffee Shop, located at 24377 Main Street. Dieters be warned: the portions are HUGE, the food is carbs galore, but the taste and price is just right. From what I hear, the restaurant has been around for decades and it certainly has an old time diner feel. 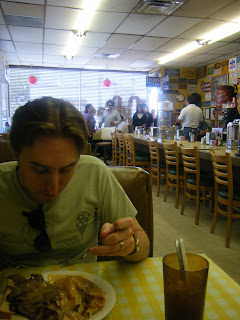 Me chowing down on an open faced roast beef sandwich. 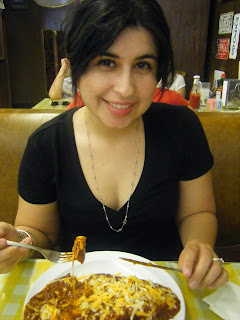 Wifey eating a chili cheese dog so big it took up the entire plate!
Posted by Robby Cress at 12:08 PM

I think it was filmed in Saugus.

Thinking back, I would place the building of the American theater at about 1937 or 1938.
Shortly after it opened, Mrs. Cordova of Castaic Canyon (before the dam) took a bunch of us kids
to see a movie there. Wm Hart had an impressive home on a knoll overlooking Newhall. I heard
that Hart, who had been a great Western movie star, financed the building of the theater on the basis that it regularly showed a certain percentage of Westerns.
About the train station, I don't remember a train station at Newhall. The station was at Saugus
which was a small cluster of buildings a mile or two west of Newhall.
Tell me, is the Stage Coach Cafe, and the blacksmith shop next to it, still standing?
Dave

The railroad station is located in Santa Paula, California.