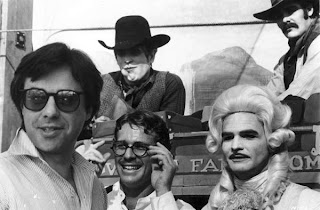 Peter Bogdanovich, Ryan O'Neal, Burt Reynolds on set
One of my favorite Peter Bogdanovich films is Nickelodeon (1976), the director's ode to the silent film days. Bogdanovich, who really got his break into the film business as a journalist in the 1960s interviewing Hollywood legends, got the idea for Nickelodeon while interviewing early silent filmmakers like Allan Dwan and Raoul Walsh. Dwan and Walsh had some pretty crazy stories about making movies during that time period, particularly about the studios trying to force out the smaller filmmakers, and Bogdanovich brings those stories to life in his film.
Bogdanovich shot some of Nickelodeon on location but there were some scenes that were filmed on the Warner Bros. backlot in Burbank, California. Here are some of those backlot locations. 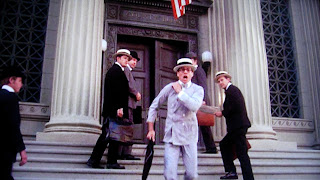 Ryan O'Neal leaves the courthouse.
The film begins with O'Neal in court. The exterior of the courthouse was actually the city hall building on the New York Street of Warner Bros. backlot. 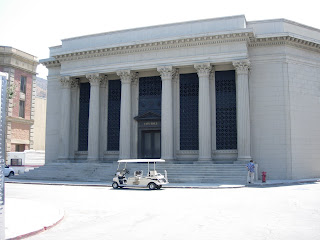 City Hall building, WB backlot.
Some of the other scenes were filmed on the Warner Bros. Midwest Street, the same street that was used for The Music Man, East of Eden, and most recently the hit show Pretty Little Liars. 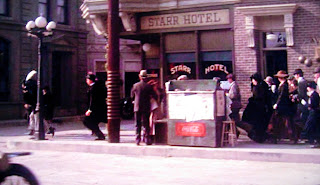 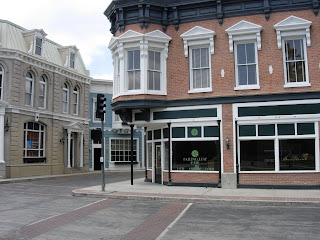 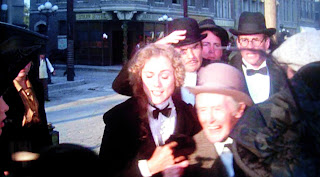 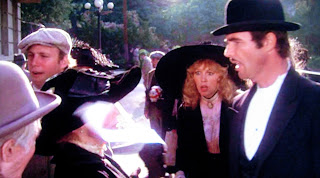 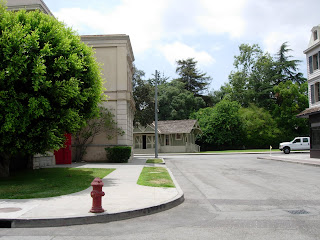 Midwest Street, Warner Bros. Backlot
This next location I'm not entirely sure about, but I'm pretty confident that the scene at the end of Nickelodeon where the D.W. Griffith film premiere is taking place, was shot on the Warner Bros. New York Street. Below is a facade that is used over and over again as a theater. I'm sure the set designers just dressed up the facade for the film. 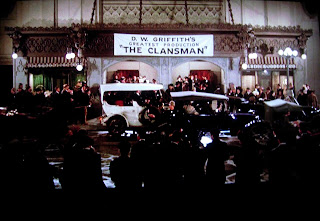 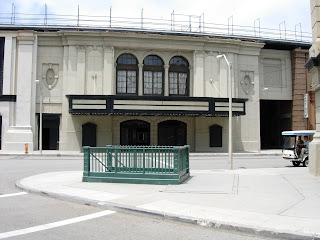 Love this movie! I remember that courthouse when I did the lot tour. The Starr Hotel in photo #1 doesn't look like the one in photo #2. In the second picture, what happened to the doorway to the right of the first set of windows? Would the building have been remodled, or was that just a phony wall and doorway in photo #1?

Hey Tom, yeah those buildings are just facades so they are always getting changed up slightly depending on who and what is filming at the time. If you look at my post on The Monster Squad finale film locations you can see the same building made up to look like a burger king! That's how much the facades will change.

Burt Reynolds is a captivating blonde!