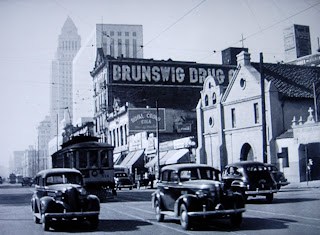 Main Street, Los Angeles as seen in Out of the Past
In the classic noir film Out of the Past, Robert Mitchum plays a private eye trying to escape his past. In the film, Mitchum's character is taken to many different locations: New York, Mexico, San Francisco and for a short time Los Angeles. We don't see much of the City of Angels but we do get a glimpse of Mitchum driving his car down a stretch of Main Street near the Los Angeles City Hall building. Above is a shot of  Mitchum driving down Main Street in the direction of City Hall. Below is the same view down Main Street today. 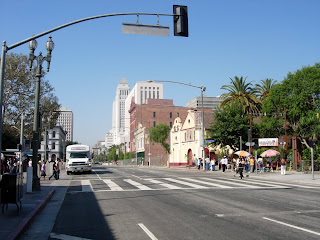 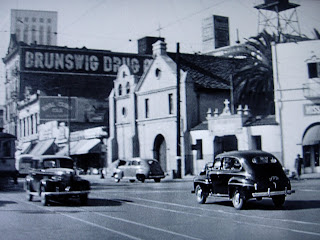 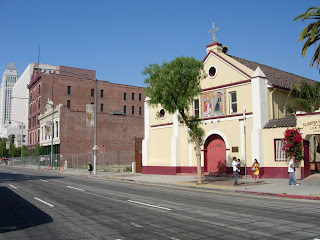 Brunswig Drug Co building. Main Street, Los Angeles
You can see from the two images above that the Brunswig Drug Co building is still standing. In fact it was refurbished not long ago. Even the church on the right is still standing, however, the buildings inbetween have been demolished since the the time of the film and is now a vacant lot.
The screenshot below is the building that would have stood to the right of the church but this building has also been torn down. 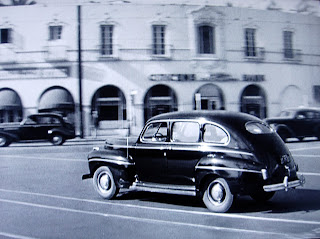 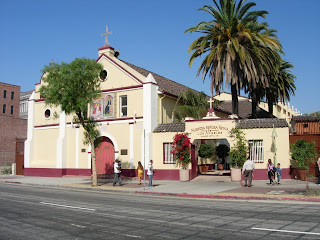 Nuestra Senora Reina de Los Angeles
Above is a closer look at Nuestra Senora Reina de Los Angeles, the church seen in the film. The original church was established in another location in 1784. Eventually a new church was built at this location in 1822 and then later rebuilt in 1861 using materials from the original structure. The church stands right in front of the plaza to the famous Mexican market place, Olvera Street, the oldest part of downtown Los Angeles.
UPDATE: August 15, 2010
Just got word that over at Laura's Miscellaneous Musings blog Laura has recently captured some of the Out of the Past film location sites in Bridgeport, California. Check it out here.
Posted by Robby Cress at 5:21 PM

I really enjoy your photos of classic film locations in Southern California. You might like to know that last week I posted photos of some of the OUT OF THE PAST locations up north in Bridgeport (here). I've added a link to your post to the end of mine as an additional reference.

Thanks for your great work -- you recently had a terrific post on Joan Crawford's POSSESSED I particularly enjoyed. My dad recognized all the locations from years he used to work downtown.

Thanks Laura for the link and nice photos. Makes me want to take the trip up north to Bridgeport! Very picturesque - just like in the film.