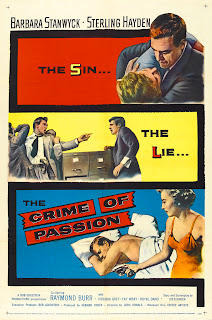 Crime of Passion (1957)
Barbara Stanwyck knows how to play tough women and her role as Kathy Ferguson Doyle, in the 1957 film Crime of Passion, shows just how tough she can be. Stanwyck plays a San Francisco newspaper advice columnist. She is a working girl with grand ambitions in an era of stay-at-home housewives. Then one day Los Angeles detective Bill Doyle, played by Sterling Hayden, arrives in San Francisco to arrest a fugitive and meets Stanwyck. The two fall in love.
Stanwyck abandons a career opportunity in New York to marry Doyle, move to Los Angeles, and become a suburban housewife. It doesn't take the ambitious Stanwyck long to lose her mind. She becomes restless with her husband who has no career ambitions and is content working just enough to live comfortably. Stanwyck also can't stand the other officer's catty, subservient housewives. Stanwyck wants to live a better life and if her husband isn't going to do anything about it she will - even if it means committing murder!
Crime of Passion is an interesting film for its representation of the 1950s woman and what her role should be. Should the 1950s woman be the submissive housewife? As Hayden's partner, Charlie Alidos, played by Royal Dano, says to Stanwyck, "your work should be raising a family, having dinner ready for your husband when he gets home." But that's not the kind of work Stanwyck wants. Even after she marries Hayden and takes on the role of the housewife she is still the dominant force in the household, telling her husband what he needs to do. When Stanwyck's husband doesn't work to get a promotion Stanwyck does it for him. She doesn't spend all day cleaning house and preparing dinner for her husband.
Despite the social commentary, Crime of Passion is a middle-of-the-road film - a bit too melodramatic for my taste. As always, my favorite thing about the movie is seeing Los Angeles in the 1950s. There are glimpses of downtown Los Angeles and some early Los Angeles suburban neighborhoods. There are also some great lines of dialogue. My favorite is an exchange between Stanwyck and Sara Alidos (Virginia Grey). At a party of police officers and their wives, Stanwyck and another wife are discussing a car accident she had been in. Grey keeps cutting Stanwyck off and says, "You know, I've been driving for twenty years now and I've never had an accident. Not one. Maybe a few near misses but nothing that was ever really my fault." Stanwyck replies, "You mustn't be discouraged Sarah - you must keep on trying." Snap!
Here are a few film locations seen in the film: 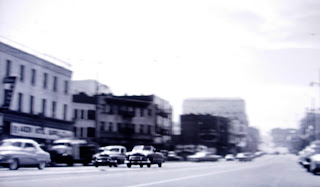 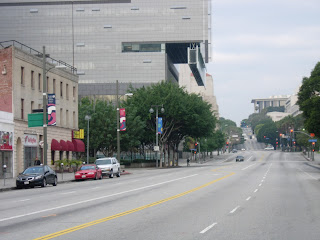 200 Block E. First Street, Los Angeles
In one scene we see Stanwyck riding with Hayden down the 200 Block of East First Street in downtown Los Angeles. They are on their way to the Police Department. Above and below are photos showing First Street as it appears in the film and how it appears today. You will notice a dramatic change. The only building still standing from the 1957 screenshot is the building on the left with the red awnings. The other buildings have been torn down and replaced by a large hotel building. 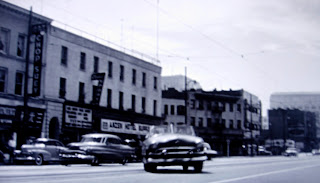 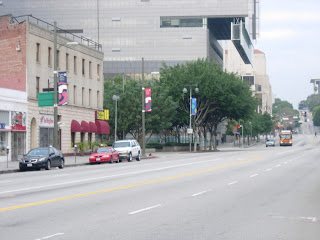 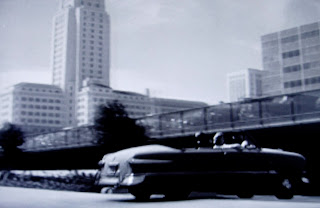 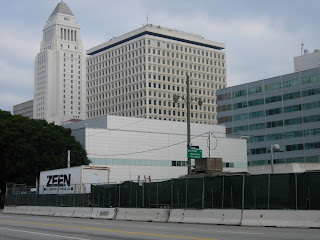 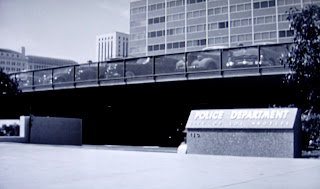 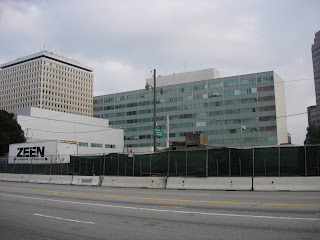 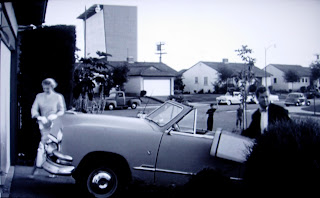 Barbara Stanwyck home in the "Valley"
Above is a screenshot of Stanwyck and Hayden moving into their new house which is supposed to be located in the Valley. I really love this image! Look at all the newly developed homes with their manicured lawns and freshly planted trees.  To top it off, look at that giant drive-in movie theatre screen in the background! How very 1950s suburbia. I would really like to see how this neighborhood appears today. Have the homes been kept up? Are the trees towering over the streets? One thing is for sure that drive-in movie theatre is not there. I think they're used to be about 5 or 6 drive-ins located in the Valley and I don't believe there are any still standing. Are there any readers out there who are experts on drive-in movie theatres who might recognize the one seen in this film?
Your thoughts?
Posted by Robby Cress at 8:19 AM

I've operated an email discussion group devoted to drive-in theatres for more than fifteen years. Let me ask some of the experts there to see if anyone recognizes it.

A member of the aforementioned DIs discussion group pointed out to me that on the IMDB.com page about CRIME OF PASSION, there's a discussion topic about the location of the house (and the drive-in).

One poster is pretty convincing in suggesting that the house is at 11170 Fairbanks Way in Culver City and that the drive-in is the Studio Drive-In, which was located nearby at 5250 Sepulveda Blvd. It closed in 1993 and was torn down in 1998.

This URL points to a 1994 aerial shot when the drive-in was still standing:

This URL points to a more recent aerial shot, with the drive-in long gone.

The relationship of the drive-in screen to the house seems to match the one in the shot from the film.

Here's one last URL, a shot of the drive-in itself.

Cladrite Radio, excellent work and thanks for sharing! I must check that area out the next time I'm over on that side of town. Pretty wild to see the before and after in the aerial shots.

FYI..I just picked up a new book called "Location filming in Los Angeles" that uses stills from films and where they were shot. Very good guide.

I just watched "Crime of Passion" last night and was very taken with the great suburbia scenes (right down to the ice cream truck and kids playing in the street) and stared and stared at that thing in the background, baffled, not recognizing it for what it was! So glad I found this page and the cool before-and-after pictures. The neighborhood looks very nice indeed as of this writing - the address shown in the film is 11170, the same as mentioned in these comments, and Googlemaps has a great street view of the area (no ice cream truck however).