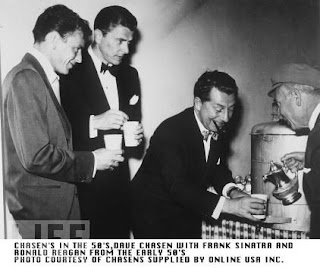 Photo from LIFE
Since opening in 1936 until closing in 1995, Chasen's was a Hollywood institution.  The restaurant, which used to be located at the corner of Doheny Drive and Beverly Boulevard at the edge of Beverly Hills,  hosted the greatest stars ever to appear on screen.
James Cagney, Pat O'Brien, Ralph Bellamy, Frank Morgan and the rest of their "Boys Club" would gather every Wednesday at Chasen's during the forties to eat, drink, sing, and catch up after their busy days working at the studios. In 1939, after Clark Gable and Carol Lombard introduced the newly arrived director from England, Alfred Hitchcock, to Chasen's, the director and his wife would have their Thursday night dinners at the restaurant. The Jimmy Stewarts, Don Ameche (who introduced owner Dave Chasen to his wife Maude), George Burns and Gracie Allen, Ronald Reagan, Bob Hope, Frank Sinatra, Jack Lemmon, Billy Wilder, David Niven, Fred MacMurray, Joan Crawford - well, nearly every major star from the Golden Age of Hollywood dined at Chasen's.
One of Chasen's signature dishes was their chili. Elizabeth Taylor loved the chili so much that in 1962, while in Rome on location filming for Cleopatra, she paid $100 to have the chili shipped to her on dry ice! I love chili and knew I had to try the Chasen's chili if it really is that good. Although the restaurant has been long closed, the book "Chasen's: Where Hollywood Dined - Recipes and Memories" by Betty Goodwin, contains the recipe for this famous chili.
With winter here I could think of nothing better to cook up than a hot bowl of chili, so I took a try at making this Hollywood classic. Here is the recipe and the results from my cooking:
Chasen's Chili 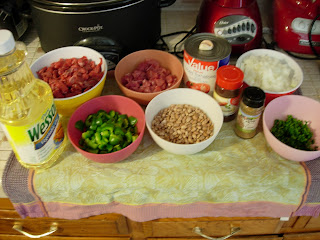 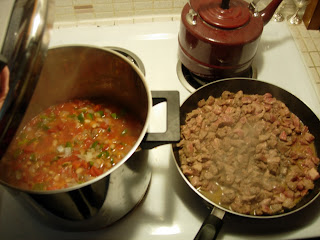 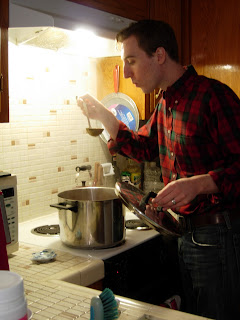 The cook in the kitchen. 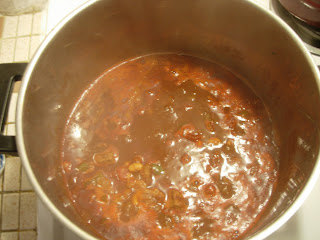 Simmering all ingredients together. 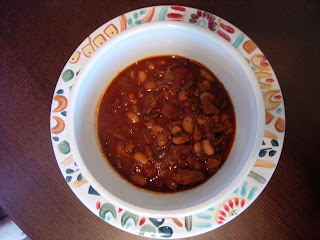 Dinner is served!
I must say, this chili turned out amazing! I understand why Elizabeth Taylor had this chili shipped all the way to Rome. If you are looking for something hearty and tasty to make this winter and want to dine like a classic Hollywood star, I recommend giving this chili a try.
For more of Chasen's recipes I recommend picking up a copy of Goodwin's book. In addition to the recipes are some intimate photographs of the stars who dined at Chasen's as well as some fun anecdotes about the restaurant.
Posted by Robby Cress at 11:40 AM

Love the blog - will be looking out for this book, too.

Mmmmm mmmm... sounds yummy! Gonna have to give it a try! (Elizabeth Taylor did *what*? Wow. No wonder Cleopatra was the most expensive movie ever made...)

Thanks Zelda. The book has been out for a while now but I'm sure you can find it online - or maybe used at your local bookstore.

Kittypackard, yeah, right?! No wonder Cleopatra cost so much! Just one more expense for that out-of-control production.

Love this mix of classic movies and cooking -- great photos. Thanks for sharing this!

Thanks Laura! The photos might be great - but the chili was even better :)

bravo for this chili chef! this was DELISH! :) readers- take the time, this was defintiely yummy and one to keep in your reciepe books! :)

great job at cooking this cutie- i was completely impressed- you've come a long way from your dry sandwich days! :) hehehe

Just used this as the basis for my latest entry at "Carole & Co."

If only there was some way to find out whether Lombard actually tried the chili...

brilliant. I put the recipe on my blog and im gonna try it

The chilli looks delicious, and thanks for the heads up about the book, I just ordered it. Thanks!

My mom sent for this chili recipe way back in 1973 from a local St. Louis radio station, KMOX. I inherited all her recipes when she passed on in '94, and made the chili for my son's 1st birthday party back in '99. it was s hit with all the guests, even my son had a little,too and thought it was great! We have been a fan of this chili ever since, and I would love to try some of the other Chasen's recipes ado!