Robert Mitchum and the Marijuana Charge 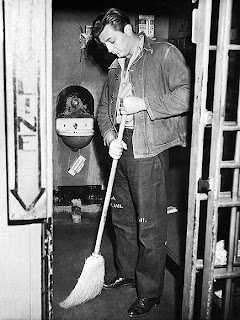 Robert Mitchum Sweeps His Jail Cell
Credit: Bettman/Corbis
Long before Charlie Sheen was making headlines for drug busts actor Robert Mitchum was making the front page as Hollywood's bad boy. During his lifetime, Mitchum would have a few encounters with the law. When Mitchum was just a teenager he had left home to live the hobo lifestyle, hopping trains going cross country. On one occasion in 1932, when Mitchum was sixteen,  the young man hopped off a train at a stop in Savannah to get some food and was arrested for vagrancy. Mitchum was sentenced to serve on a chain gang.
But, Mitchum was lucky that he was only busted for vagrancy. During his hobo days Mitchum picked up a lifelong habit of smoking marijuana. Sometimes during those long train rides the marijuana helped kill the boredom or when passing through northern states during the harsh winter months, smoking marijuana made the extreme weather conditions tolerable. Mitchum got to the point that during his train travels he could distinguish the different varieties of marijuana one could encounter. When Mitchum would make has way west to Hollywood his interest in marijuana went with him and would be the subject of one of his most notorious scandals.
By 1948, Mitchum had become a recognizable actor, particularly with  the bobby-soxer crowd who liked the bad boy image that he was beginning to be identified with. On August 31, 1948 an event would take place that would only add to Mitchum's reputation. Mitchum and his friend Robin Ford, a real estate agent, visited a young actress named Lila Leeds and her friend Vickie Evans at a house Leeds rented in Laurel Canyon. The four were taking turns passing around a joint when suddenly a crash was heard at the back of the house. A group of cops had made their way into the home and arrested the group for drugs.
Mitchum and the rest of the party would be tried by Judge Clement Nye. Mitchum pleaded not guilty but  Nye found them guilty, sentencing Mitchum to two years of probation, sixty days of which would be spent behind bars. 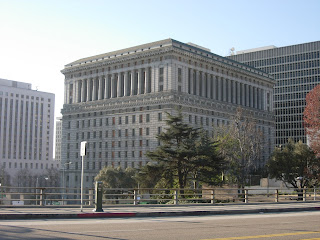 Los Angeles Hall of Justice
Above is a photo of the Los Angeles Hall of Justice building in downtown Los Angeles located at 210 West Temple Street. The 14-story building was built in 1922 and housed the Los Angeles County Courts, Los Angeles County Coroner, Los Angeles County Sheriff's Office, and the Los Angeles County District Attorney. It was also the primary LA County jail until the 1994, Northridge Earthquake. The building was damaged in the earthquake and has sat abandoned ever since, although there are plans to move back into the building. It really is a nice looking building and is a shame that it is not being used.
The Hall of Justice building was where Mitchum served fifty days in jail but Mitchum isn't the only well known personality to stay there. Bugsy Siegel, Charles Manson, and Sirhan Sirhan (Robert Kennedy's murderer) have all spent time at the Hall of Justice in the jails which were located in the top five floors of the building. In the basement of the building was the City Morgue and is where the autopsy of Marilyn Monroe was performed.
Mitchum also served time at the Sheriff's Honor Farm north of Los Angeles. Most of of Mitchum's day was spent working on the farm making concrete blocks. The actor would wake at 5am, have breakfast, work until a short lunch break and then go back to work until the evening. During Mitchum's jail time, Howard Hughes, who was then in charge of RKO studios where Mitchum was under contract, was preparing Mitchum's post-jail career.

While such publicity would kill the career of many actors Mitchum's star would continue to rise. The negative publicity probably boosted his career and in the eyes of some only reinforced the image they already had of the actor.
Posted by Robby Cress at 11:38 AM

Due to some familiarity with that jail in 1968, I was told that Mitchum put in the sound system so we could enjoy the radio.
Thanks Bob!

He was a handsome sexy man. It's easy to see how he became a star

Watching the anti-drug documentary DISTANT DRUMMER: A MOVABLE SCENE that the courts made him do in order to reduce his sentence.

First movie I saw him in was Thunder Road. After that, if I saw that one of his movies was on TV, I watched it, even if it meant ditching work during the day. Top three actors in my book were Robert Michum, Steve McQueen, and James Dean.