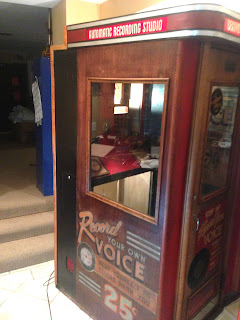 The Record Booth from Inside Daisy Clover (1965)

One of the things I've enjoyed about posting on Dear Old Hollywood the past few years has been learning new tidbits about Hollywood and classic films through readers of the blog. I love it when you guys come up with great information that adds to the old Hollywood discussion. Just recently, reader Bill Bollman, a collector of vintage record booths wrote me with information regarding the record booth that Natalie Wood uses to record an album in the film Inside Daisy Clover (1965). In the film the record booth was inside the carousal building located on the Santa Monica pier. Bollman has acquired this record booth and was nice enough to share some pictures and to provide some background on this piece of Hollywood cinema history. Here's what Bollman had to say:


I am a Patent Attorney by trade, but as a hobby I collect vintage coinop machines.  In that vein, I have acquired a 1940s wooden Record Booth that I am told was operated at the Graumans Chinese Theatre in the 40s and 50s, but low and behold it is the very booth used in the opening scene of “INSIDE DAISY CLOVER”.    The original keys for the booth came with a label that would appear to be a Warner Brothers inventory control tag, but I’m in the process right now of researching that.

Over the past 10 years I’ve become somewhat of an expert on the Voice-O-Graph booth, recently acquiring a similar 1940s model wood Record Booth for Jack White of Third Man Records in Nashville.  I have been tracking just about all surviving models (only about 100 were ever made, and just a very small handful survive today.)  Of all the known wooden Voice-O-Graph Record Booths (and vintage photos of booths), none but this one have windows.  And this booth is quite unique in that it is actually an operating machine, but operated at 35c.  The external graphics have been changed FROM 35c TO 25c (quite unusual).  Presumably the producer of Inside Daisy Clover felt the 25c was more appropriate for the 1930s period in which the movie is set.

Natalie Wood inside the record booth.

Beside the uniqueness of this configuration of the Record Booth with side windows (never seen before) and general rarity of the booth itself – proof certain that this booth is in fact the very booth used in this Warner Brothers movie is that the scratch in the wood seen in the movie to the left of the window . . . 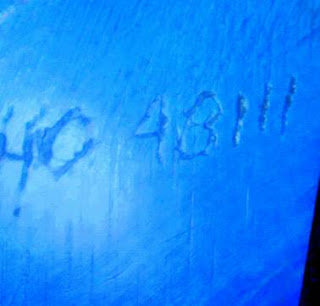 But perhaps most interestingly of all (and fascinating for any Rebel Without A Cause fans), the booth includes two scratchings inside, this one in hand-scratching with much similarity to known handwriting of James Dean: 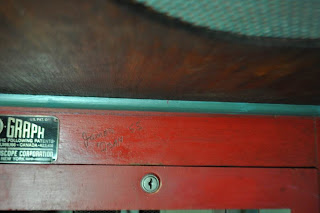 And then this one, apparently reading “J.D. + B.g.” in a doodled heart, evoking the possibility that this refers to James Dean and Barbara Glenn: 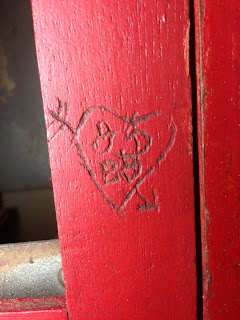 This is a beautiful, WORKING Record Booth (I’m fine tuning it now).  Research is currently ongoing – any information anyone may have (photos of the Record Booth at Graumans between 1946 and the late 1950s would be fantastic) would be greatly appreciated!

So that’s it’s story so far!

Thank you very much, and best regards,
Bill Bollman

Now how cool is that! If anyone may have more information on this Record Booth you can contact Bollman at RecordBooth@gmail.com.

Thanks again Bill for the pictures and backstory!

Your thoughts?
Posted by Robby Cress at 3:21 PM

This is SO cool. What a lucky guy to have found that!