Touring Liberace's Homes and Other News 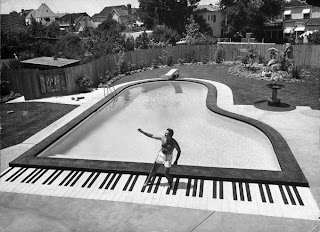 Liberace in his piano themed pool.

The blog Curbed Los Angeles added an awesome post the other day mapping out some of Liberace's "Razzle-Dazzle" homes in Los Angeles, Palm Springs and Las Vegas. Complete address information and photos like the one above showing Liberace in his piano-themed house in Sherman Oaks can be found in the Curbed post here. As one might expect, all of the homes are theatrical, kitchy and fun! 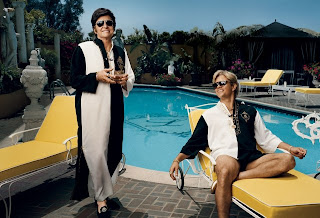 Michael Douglas as Liberace and Matt Damon as Scott Thorson

Tonight on HBO is the premiere of a new film about Liberace starring Michael Douglas as Liberace. The Steven Soderbergh directed film includes many other stars such as Matt Damon, Rob Lowe, Dan Aykroyd, Debbie Reynolds, and Paul Reiser. Some interesting trivia about the film has already been posted on IMDB.com. Here are a couple of the notes: 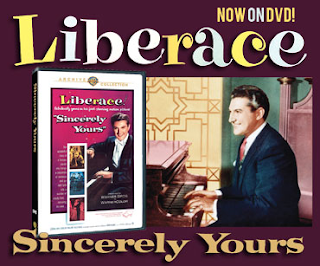 Above is a preview clip of Sincerely Yours from the Warner Archive.

I didn't get to watch the HBO film but hopefully will get to catch it soon.
However, I was fascinated with Liberace as a child after seeing him on The Muppet Show. He had glittering piano rings and my mom told me he had a pool shaped like a piano. Five-year-old me thought he sounded amazing :)

I totally remember Liberace's appearance on The Muppet Show. What a great combination - Muppets and Liberace!