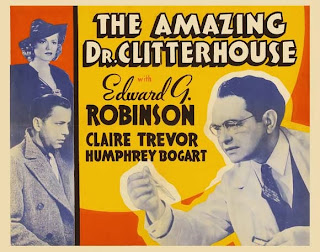 As far fetched as the story may be, the film The Amazing Dr. Clitterhouse (1938) is nevertheless an interesting twist on the popular gangster pictures Warner Bros. was pumping out during the 1930s. The superb Edward G. Robinson plays the title role of Dr. Clitterhouse, a well respected doctor who believes that to really understand the criminal mind, one must become a criminal himself. Robinson teams up with a local gang headed by Rocks Valentine, played by Humphrey Bogart who was still a rising star trying to get beyond gangster roles. Robinson uses his brilliance to mastermind a big heist and in the process studies the criminals he is working with. The observations Robinson makes are invaluable to his research but things get a little hairy when Bogart starts to feel Robinson, with his smarts, may displace him as leader of the gang. Robinson may have immersed himself a little too much into his research.

There are very few exterior scenes in the film. Most of the action takes place on interior sets, including the rooms of the gangster headquarters, a home of a mansion, the medical office of Dr. Clitterhouse and a police station, all of which would have been built inside soundstages on the Warner Bros. lot. There are two noticeable exterior scenes. One is a quick shot near the beginning of the film of a car driving through town on the way to the mansion where a robbery was committed. The second is the scene where Robinson leads the gang on a heist at a fur factory. Both exterior scenes were filmed at the same location of the Warner Bros. backlot in the area known as Embassy Courtyard/New York Park. 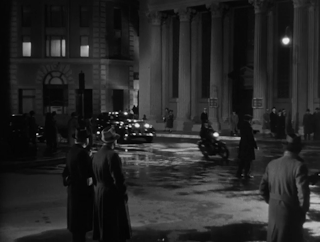 A car passes a court house style building on the Warner Bros. backlot. 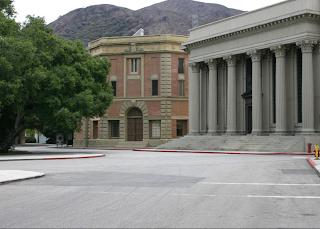 In the scene above from the beginning of the film we see a car driving pass two facades that are still recognizable as buildings in the Embassy Courtyard/New York Park area of the Warner Bros. backlot. The facades are slightly changed, as over the years some facades were rebuilt due to fires that occurred on the Warner Bros. lot and because of revisions made to the facades from film project to film project, but we can still identify the basic structures.

The scene immediately below is a continuation from the scene above and shows the car passing from the Embassy Courtyard area of the backlot and continuing into New York Street. 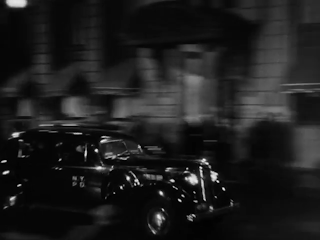 The car continues from Embassy Courtyard into New York Street. 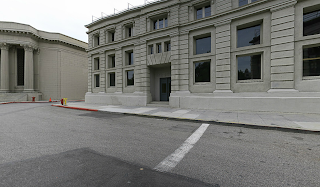 The facade from the scene above as it appears now. 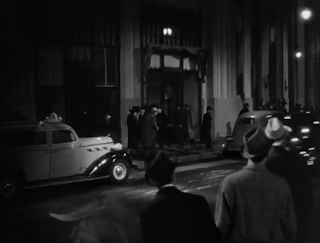 The car passes another facade heading into New York Street. 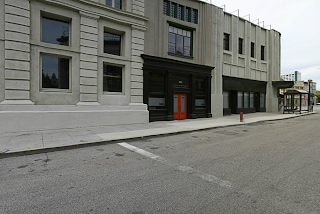 The same facades moving into New York Street as they appear now.

The below scene is of the fur factory where Robinson and gang pull a heist. The location is the same as the very first scene above, only the camera is located further back giving us a wider perspective of the location. As you can see, the film crew used a matte painting in the background to create the illusion of a big city. The buildings on the right are the facades that are still recognizable today. The court house style building can be seen at the very edge. The facades on the left used as the fur factory building are now the site of a small park space. 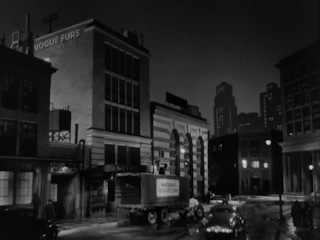 The location of the fur factory where Robinson leads a heist.

The same view as it appears today. 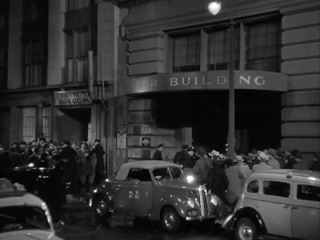 A closeup view of the Fur Building. 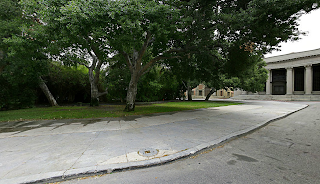 The Fur Building is now the site of a park space. 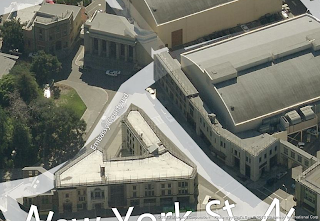 A Bing Bird's Eye view of the Embassy Courtyard and park.

This same area of green space has been used to stand in for New York's Central Park and has recently been used as a park in the current television show, The Big Bang Theory. You can see it in the clip below from Episode 6 of Season 3, "The Cornhusker Vortex," where the cast is scene flying kites. The park appears about one minute in.


The park appears in this clip from The Big Bang Theory.


The same area of the Embassy Square, particularly the section where the court house style facade stands, has been covered here on Dear Old Hollywood previously in posts on Nickelodeon (1976), Sex and the Single Girl (1964), and The Omega Man (1971).

The Amazing Dr. Clitterhouse was directed by Anatole Litvak and in addition to Robinson and Bogey, also stars Claire Trevor, Allen Jenkins, Donald Crisp, Gale Page, Henry O'Neill, John Litel, Thurston Hall, Ward Bond and Max 'Slapsie Maxie' Rosenbloom. The screen play was written by John Wexley and John Huston and was based on an earlier stage play. The film is available on DVD, can be rented through ClassicFlix and Netflix,  as well as streamed on Warner Archive Instant.

This film is a personal favorite of mine. Thanks so much for this post! I recognize those areas of the lot from when I visited Warner Bros. and did a tour earlier this year. Ahh! Great job Robby! I love how you worked in the Big Bang Theory!

I love this film too. I feel it often gets tossed into a bin of camp films, simply because of the title, but it is not really campy at all and quite good. Glad you were able to recollect your WB visit. And I couldn't resist working in The Big Bang Theory into the post :)

I came across your blog entry while searching for the history of Castle Argyle, since I am a new to Los Angeles and have taken residence on Argyle Avenue. I just wanted to commend you for a wonderful job with this blog after having found myself spending hours on it. I am a young actor with a nostalgic taste for old Hollywood and this has (and will continue) to be a pleasure read. Thank you for your contribution!

Many thanks for the kind comment. And welcome to Los Angeles. You've certainly found a great old Hollywood apartment building to take up residence in the Castle Argyle! If walls could talk, I'm sure that building has some interesting stories.

I remember this film when I was a kid but never knew the name. I remember the scene with Don Ameche and young Harry Morgan walking thru the town and it had me in tears. Both were under contract at Fox and wee in several films together but this one is special.