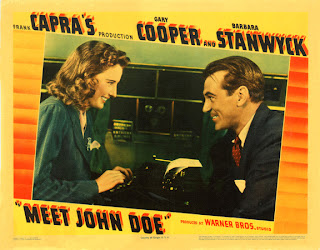 Frank Capra is one of those directors where I can watch just about any one of his films and be entertained. Many of Capra's movies are heavily sentimental, wholesome message pictures which some critics have dismissively referred to as "Capra-corn." Although Capra's filmmaking style may seem a bit old-fashioned, for me personally it's one of the qualities I enjoy about Capra's films, and regardless of Capra's style, the subject matter in his films from the 1930s and 1940s, are just as relevant now as they were then. Whether it be a naive scout leader who thinks by becoming a senator and going to Washington he can help his country in Mr. Smith Goes to Washington (1939) or a presidential candidate who struggles to stick by his ideals and not sell out to special interest groups in State of the Union (1948), Capra's films touch on subjects that still strike a chord as a contemporary viewer watching the current political circus taking place.

The film Meet John Doe (1941), starring the always wonderful to watch Gary Cooper and Barbara Stanwyck, is another Capra classic portraying a "common man" fighting greed and corruption for the greater good of society. In this story, Stanwyck is a reporter who finds out that she is being laid off. For her last column she publishes a letter from a fictional "John Doe" who threatens to kill himself on Christmas Eve in response to society's inattention to people in need. When the letter is printed it causes a sensation and newspaper sales spike.  Stanwyck is kept on at the newspaper to continue her charade and to exploit the popularity of John Doe to sell more papers. After interviewing several hobos, Stanwyck discovers John Willoughby (Gary Cooper), a former baseball player in need of cash to repair an injured arm, to portray her John Doe.

With Cooper as the face of John Doe, Stanwyck continues to be John Doe's voice through her typewriter, publishing a series of letters from John Doe in the newspaper. With people all over the country stirred by John Doe's philosophy, the newspaper's publisher, D.B. Norton, decides to take things further and hires Cooper to give radio speeches which Stanwyck will write. A grassroots movement begins with John Doe supporters around the country creating John Doe clubs, with the simple philosphy of "Be a better neighbor."Intending to capitalize on John Doe's growing popularity, Norton plans to use John Doe to endorse him as a presidential candidate. Cooper himself begins to believe the John Doe philosophy, realizes he is being used and attempts to make things right with the public by exposing the entire scheme.

There is no real life city mentioned in the film, only a fictional town called "Millville" but the exterior scenes were all filmed in the Los Angeles area, including the Warner Bros. Studio backlot in Burbank. Here are a few of the Meet John Doe filming locations as they appear today. 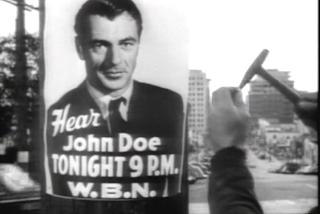 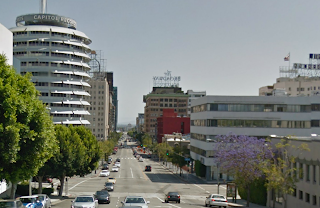 Looking down Vine St. above Yucca St. as it appears today.

When John Doe is going to make his premier on radio, the scene opens with a shot of a guy hammering an advertisment to a pole that is on Vine Street in Hollywood. The camera gives us a view looking south down Vine Street from just above Yucca Street. We get a glimpse of the Broadway Hollywood building on the right. Just behind the bill advertising "Hear John Doe TONIGHT 9 P.M. W.B.N." is where today stands the Capital Records building, which wasn't finished until 1956, fifteen years after Meet John Doe was made. 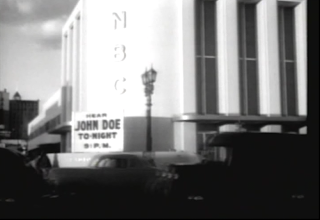 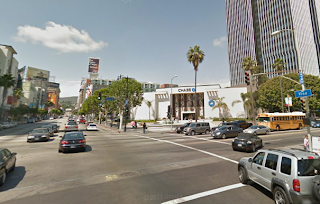 Former site of NBC Studios at Sunset and Vine.

The location where Cooper gives the radio speech as John Doe is NBC Studios in Hollywood, located at the northeast corner of Sunset Boulevard and Vine Street. The art deco NBC building opened in 1938 and was the West Coast headquarters for NBC Radio Networks. In 1962 NBC moved to a new building in Burbank and in 1964 the Hollywood location was demolished. Today the site is the home to a Chase bank. 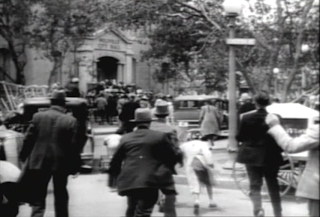 The "Millville" town square is Midwest Street at Warner Bros. 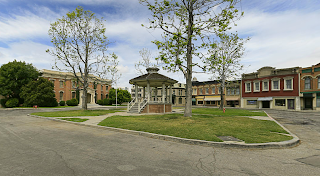 Later in the film, after Cooper realizes he is being used and decides to go back to obscurity, he is recognized in a diner in the small town of "Millville." Millville is really part of the Warner Bros. Studio backlot area known as Midwest Street. In the screenshot above the people of Millville frantically run across the town square to get a glimpse of John Doe. Midwest Street has appeared in numerous films including The Hard Way (1943), East of Eden (1955), The Music Man (1962), Suppose They Gave a War and Nobody Came? (1970) and The Monster Squad (1987) to name a few. 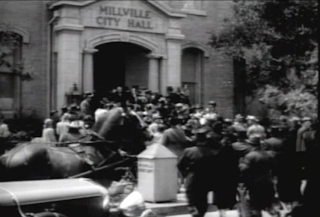 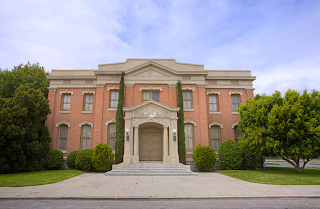 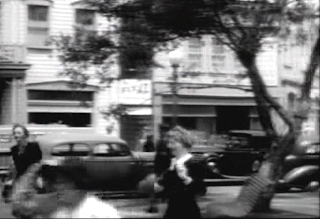 Looking across the Millville town square. 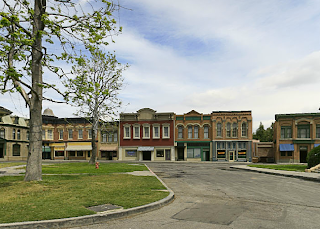 Near the end of the film, Cooper is supposed to give a big speech as John Doe endorsing Norton for president. Instead, Cooper plans to expose the whole deceptive scheme. The big speech takes place in a stadium and the stadium that was used for filming was Wrigley Field in Los Angeles. The stadium was located on 10 acres between San Pedro Street to the west, Avalon Blvd to the east, E. 41st Place to the north, and E. 42 Place to the south. The stadium opened on September 29, 1925 and for 33 seasons was the home to the Angels and for 11 seasons it was also the home to the rival Hollywood Stars. The stadium was eventually demolished in 1969. 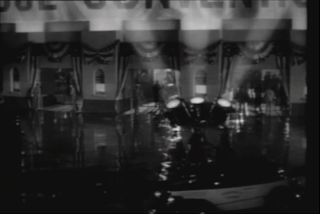 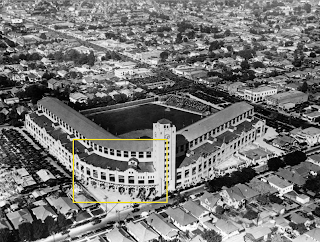 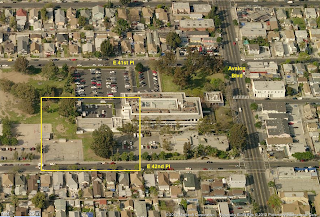 Aerial of the site of Wrigley Field as it looks today.

In the two images just below, the first is a screenshot showing the inside of Wrigley Field as seen in the film and the second is a clearer vintage photo from 1937, during a game of Hollywood comedians against Hollywood leading men. 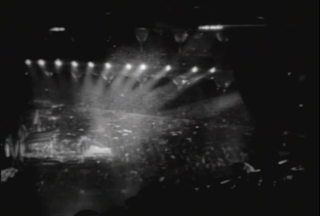 Inside view of Wrigley Field as seen in Meet John Doe. 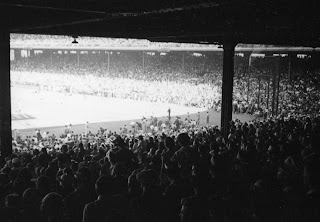 The end of the film involves Cooper contemplating jumping from City Hall on Christmas Eve. Although Los Angeles is not mentioned as the location of the story, the city hall that is used for the story is the Los Angeles City Hall as seen in the screenshot below. However, it looks like the LA City Hall was recreated in one of the Warner Bros. Studio sound stages. For one, the skyline is different and second, although possible, its not likely to be snowing in downtown Los Angeles. 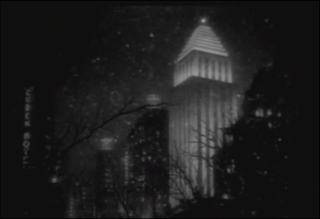 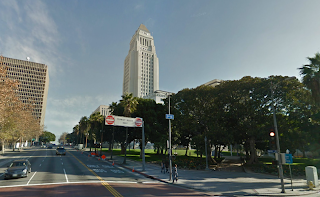 I highly recommend this film. If you haven't yet seen this classic, ClassicFlix currently has Meet John Doe available on DVD to buy or to rent.

Being a fan of historical LA architecture, I love these film location comparison blog posts you do! In fact, even if I wasn't a fan of all that stuff, I'd still find it fascinating. Keep up the good work!

Another great before and after, Robby. Love seeing the changes, well, interesting, but more often than not I liked it the old way better.

Thanks Paul. Could you imagine if that baseball stadium was still in the neighborhood?! Might have made a great home for a minor league or college league team. Too bad it's long gone.

I always find it fascinating when filmmakers used LA locations and studio lots to depict other cities. This was a great post, per usual, Rob!