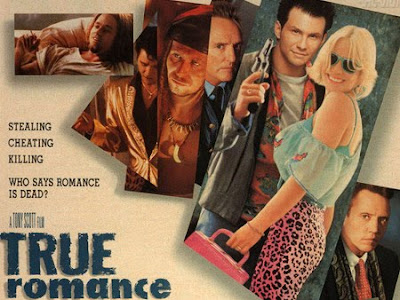 True Romance (1993)
I love the build up to the Academy Awards and trying to see all the possible Oscar contenders, especially the best picture films. A couple weeks ago Tom O'Neil wrote a piece on the Los Angeles Times blog, The Envelope, suggesting that Quentin Tarantino's latest film, Inglourious Basterds, will be the big winner. Inglourious Basterds was a great movie, but I wouldn't immediately think of that as being one of the big contenders for best picture. Although, I would have never expected Tarantino to win an Oscar for writing Pulp Fiction in 1994, so I guess we'll see what happens.
Before Inglourious Basterds and Pulp Fiction, Tarantino wrote a less award noteworthy film called True Romance. However, there are a couple noteworthy Los Angeles film locations featured in the film.
At the start of the film, Clarence Worley (Christian Slater), goes to the movies on his birthday at the Vista Theater. At the theater he runs into Alabama (Patricia Arquette), an escort, hired by Clarence's boss to keep him company. Below is a picture of the Vista Theater as seen in the film which is supposed to be located in Michigan in the movie. 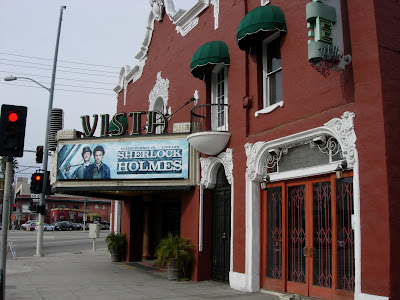 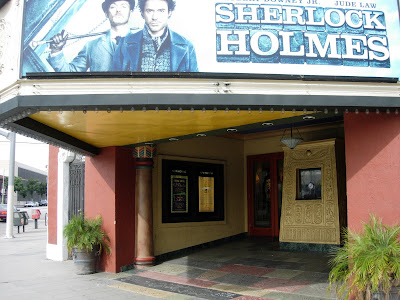 Entrance to the Vista Theater
Classic Film buffs will be interested to know that where the Vista Theater stands is once the site of D.W. Griffith's enormous Babylon set for his epic film, Intolerance. 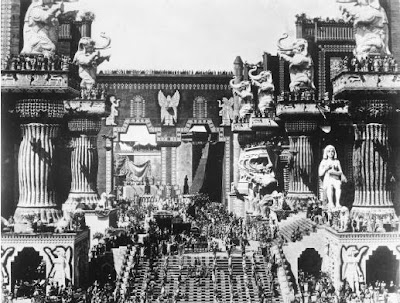 Babylon film set, Intolerance
Clarence and Alabama quickly fall in love, come across some dope, get into trouble with some gangs and go on the run. They leave their place in Michigan and head west for Hollywood. While in Hollywood Clarence and Alabama stay at the Safari Inn motel, which is actually located just north of Hollywood in the city of Burbank.

Christian Slater & Patricia Arquette arrive at Safari Inn Motel
Above Clarence and Alabama arrive at the Safari Inn. Below is a photo of the motel entrance as it appears today. 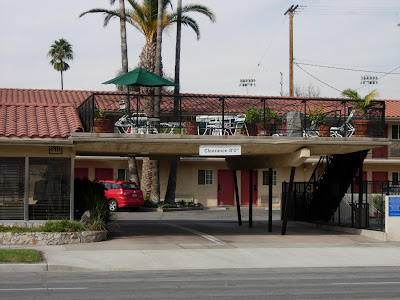 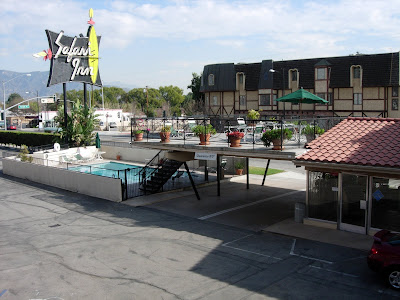 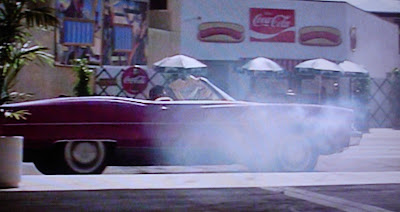 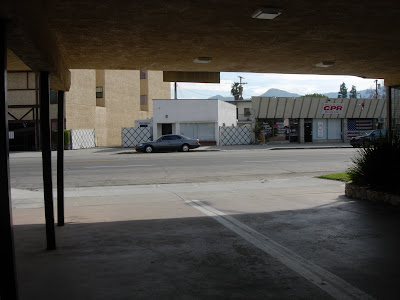 Looking out from Safari Inn
You'll notice that the hot dog restaurant no longer exists. I actually don't know if that restaurant seen in the film was real or not? Does anyone know if that signage and table umbrellas were put up for the film or if there actually was a restaurant across the street from the Safari Inn in Burbank?
In the movie when Christian Slater's character pulls into the Safari Inn driveway he is driving down Sunset Boulevard in Hollywood and then turns into the motel driveway. Of course that was fancy camera cutting, because the Safari Inn is actually located on Olive Ave in Burbank.
The Safari Inn is a pretty neat motel. My family and friends have stayed there a few times. Many of the rooms are suites with full kitchens inside. They're more like apartments. If you're visiting from out of town to visit the studios I definitely recommend the place. Plus, how can you not like the the 1950s design? 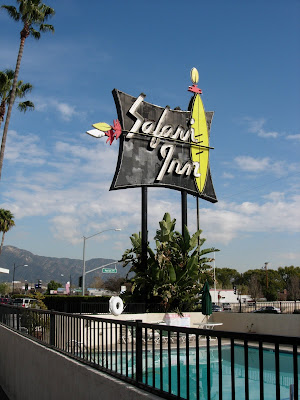 The Letters of Stan Laurel 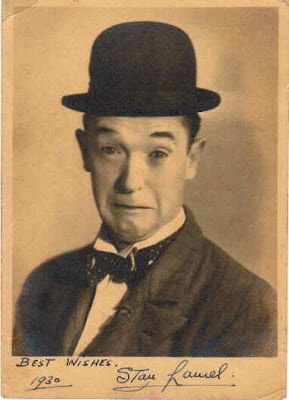 If you didn't get enough reading materials over the Christmas holiday then make your way over to one of my favorite websites, Letters From Stan. The Stan in referance is Stan Laurel, half of the comedy team, Laurel and Hardy. Throughout Stan's life he was known to be an avid writer of letters. He wrote to friends, business associates, fans and just about anyone. Stan simply liked to write and over at Letters From Stan they have created an archive of many of the letters he wrote over the years.

When you read through the letters you get a real sense of what kind of man Stan was. One of my favorites is one letter he wrote in 1927, replying to a fan:

Just a line to thank you for your very sweet letter, which is greatly appreciated. I am mailing you under seperate cover, a photograph per your request. Trust you will receive same alright. I am returning herewith the Twenty Five Cents you enclosed, as the amount of my Fan Mail does'nt warrant any charges.
Thanking you for your kind thoughts & good wishes,
Very Sincerely yours;-
Stan Laurel

I like this letter because it shows how much he appreciated his fans. Not only was Stan nice enough to reply to this particular fan, but he also returned the money she enclosed. This is just a short letter you will find over at Letters From Stan - there are many, many, letters of all lenghts and topics. I especially like seeing where the letters were addressed from - to see where Stan was living or staying at that the time.

In today's world of emails, text messages and tweets, after reading some of Stan's letters, it really makes one want to put pen to paper.

Your thoughts?
Posted by Robby Cress at 9:12 AM 6 comments: