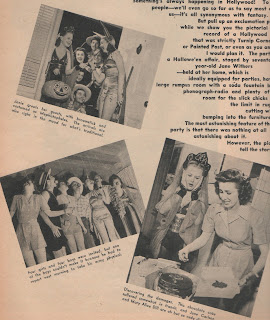 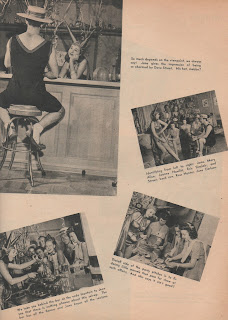 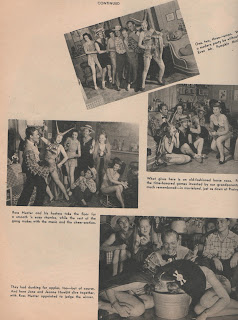 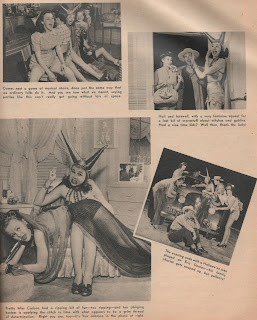 Halloween is one of my favorite holidays and even as adult I still like to get dressed up in costume and celebrate. Although, this year I still have no idea what I will be and time is running out! Do you have any Halloween traditions, plans, costume ideas?
Posted by Robby Cress at 5:16 PM 2 comments: 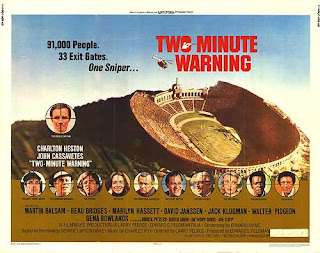 Right now there is a battle going on in Los Angeles. It's a stadium war. There are a few competing developers out there that each think they have the best plan to build a new stadium in Los Angeles and bring back an NFL football team. Whichever plan wins out, I just hope that the ghost of Charlton Heston is looking over the stadium on the day some psycho decides to attend the game and start picking off people with a sniper rifle.

Two-Minute Warning (1976) takes the basic idea of the earlier Peter Bogdanovich film, Targets (1968), in that it has a sniper who sets out to shoot innocent people in a public place. In Targets the shooter plants himself on top of an LA gas tank and starts shooting people driving by on the freeway. In Two-Minute Warning a shooter hides at the top of an LA football stadium ready to shoot players and fans attending a big championship game. The biggest difference between the two films is that Targets has a real feeling of suspense, whereas Two-Minute Warning feels forced and cheapened by an all too familiar disaster film formula. And of course, 1970s disaster film king, Heston, is there to save the day.

If you like the disaster film genre, you will probably find some value in this film. It's also worth watching for the Los Angeles filming locations and the great cast: Heston, John Cassavetes, Martin Balsam, Beau Bridges, Jack Klugman, Gena Rowlands, Walter Pidgeon and a few other great characters.

Most of the action takes place at the Los Angeles Memorial Coliseum located at 3939 South Figueroa Street. [Click images to see larger.]

Opening scene looking over the stadium. 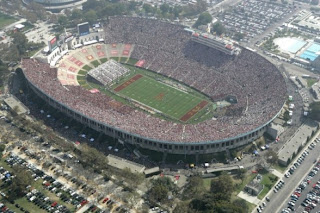 The football teams in the film are fictional but the Los Angeles team wears the same colors as the University of Southern California Trojans: Cardinal Red and Gold. Below is a screenshot of the stadium filled with fans in their red and gold colors.

The Memorial Coliseum is the location of the championship game. 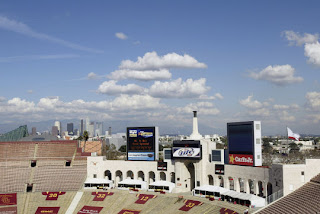 A view of the Coliseum entrance tower. Photo: SCPR.org 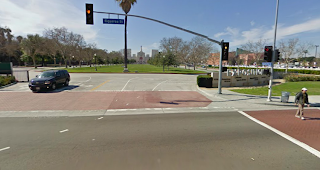 Beau Bridges and family picnic in front of the Coliseum.

At the beginning of the film the sniper, standing from a hotel balcony, shoots a bicyclist riding in the distance. We don't really get an explanation why he shoots the cyclist, but maybe he's warming up before going to the stadium to shoot more people? The hotel location is what is now known as the Hotel Angeleno in Brentwood, located at 170 N. Church Lane. The hotel is right next to the 405 freeway and Sunset Boulevard, the heart of the "Carmageddon" construction that has been taking place. 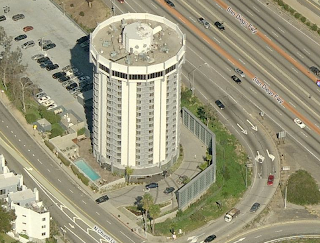 The Hotel Angeleno as it appears today.

The sniper stands from the hotel balcony and shoots a bicyclist riding down N. Thurston Circle in the neighborhood directly across the 405 freeway. The building with the two chimneys, see inside the yellow circle, is the easiest building to identify.

N. Thurston Circle as it appears in the film. 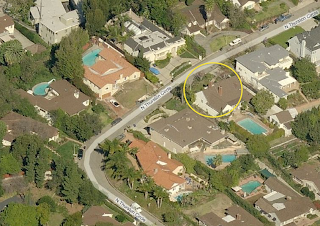 A cyclist is shot at the corner of N. Thurston Circle and Thurston Pl. 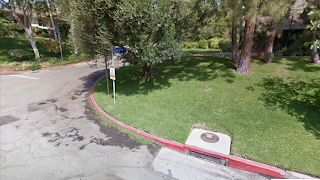 N. Thurston Circle and Thurston Pl. as it appears today.

The sniper on N. Church Lane in front of Hotel Angeleno. 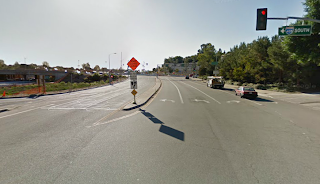 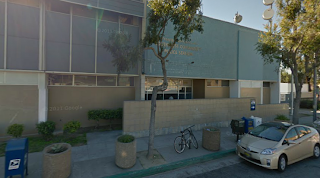 Below the sniper is driving from the hotel to the stadium located downtown. He is driving down the 10 freeway where it crosses S. Union Avenue. It's interesting to see how much the skyline has changed on the left in about 36 years.

The sniper drives down the 10 freeway. 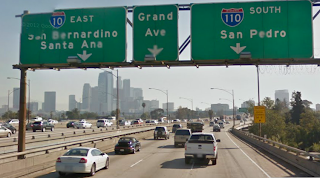 The 10 freeway where it crosses S. Union Ave.

Many of the people that have traveled to attend the big championship football game stay at the Sheraton Town House located at 2961 Wilshire Boulevard.

The Sheraton Town House as seen in the film. 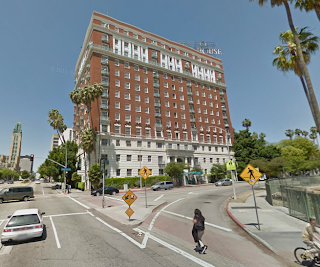 The Sheraton Town House as it appears today.

In the scene below, one of the hotel guests is entering a taxi in front of the hotel entrance on S. Commonwealth Ave. This is the same spot where in the film Donovan's Brain (1953) actor Lew Ayres is seen getting into a car. Also, peeking in the distance is the First Congregational Church, the church James Mason attends in the film Bigger Than Life (1956). 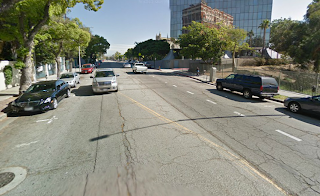 In front of the Sheraton Town House on S. Commonwealth Ave.

Jack Klugman is hung out of the Sheraton balcony.
First Congregational Church is in the background. 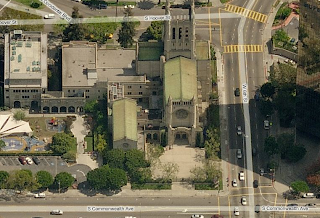 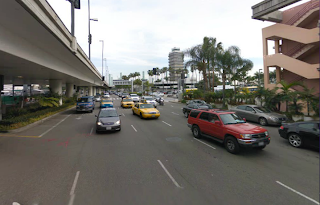 Below the sniper is almost to the Coliseum. He is driving down S. Figueroa Street near the intersection of 39th Street. In the distance you can see what looks like an old Kentucky Fried Chicken sign in the film but is now the site of Chano's Drive-In. 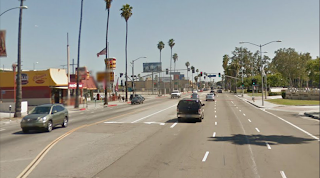 S. Figueroa St. near 39th Street as it appears today.

The sniper drives one more block down Figueroa and pulls into a parking lot across from the Coliseum. 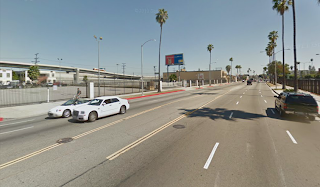 The sniper pulls into the parking lot at 3937 S. Figueroa. 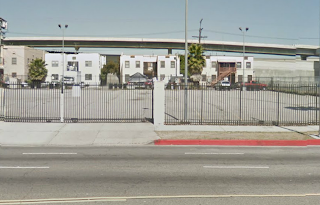 Two-Minute Warning is currently available for streaming on Netflix and as an Amazon Instant Video. It is also available on DVD.

To see the Los Angeles Memorial Coliseum in a 1930s football themed movie, check out this previous post on the film locations for College Coach (1933).