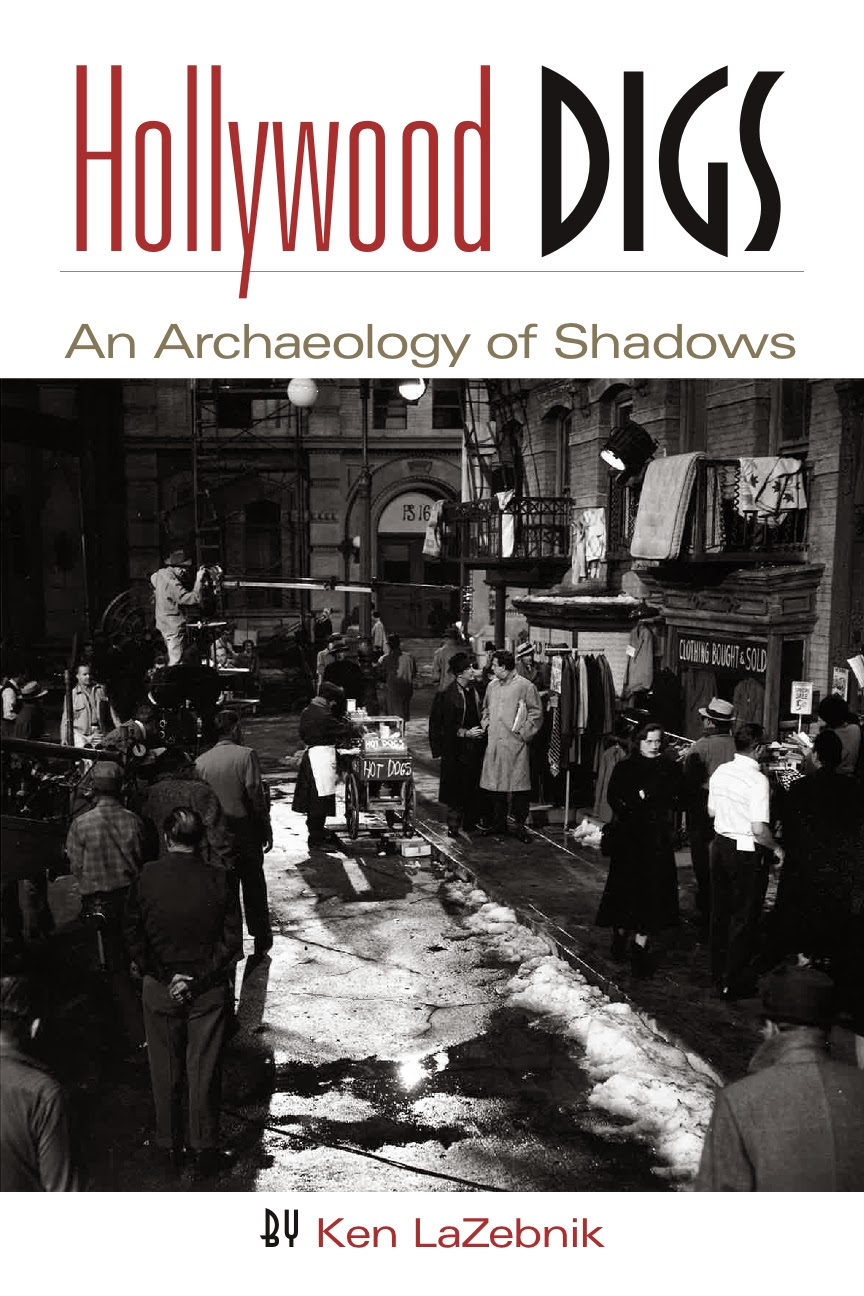 In addition to wanting to work in the entertainment industry, part of the reason I moved to Los Angeles was to be able to live in an area where so much Hollywood history has taken place. To me Los Angeles is like an amusement park for Hollywood history nerds. Instead of different themed "lands" you have different neighborhoods, each containing their own unique stories and landmarks. The trouble is if you don't know what you are looking for you might completely miss out on some of these fascinating stories. There are many interesting Hollywood stories that are hidden or forgotten, they just need to be uncovered.

In his book, Hollywood Digs: An Archaeology of Shadows, author and screenwriter Ken LaZebnik has done just that - he has dug up some Hollywood stories that have been buried over time and where only shards of history remain. Each chapter focuses on a particular item or place that lead into untold histories involving such subjects as Dick Powell, Marlon Brando or Judy Garland. A street sign in Encino is used to begin a story about F. Scott Fitzgerald during his final days living in a cottage on the estate of Edward Everett Horton. In another chapter a plaque at the legendary Sportsman's Lodge in Studio City honoring stuntman (and father of actress Sally Field) Jock Mahoney, is the starting point for an essay about the stuntman's tragic life.

One of my favorite stories involves LaZebnik visiting a Los Angeles garage sale at Sunshine Terrace, up Laurel Canyon, where he uncovered a binder that included on the first page the note, "Melville Shavelson: THE LITTLE BUGLER." It turned out to be that LaZebnik was in the home of a former president of the Writers Guild of America, West, as well as a successful Hollywood writer,  but who today is largely forgotten. Shavelson got his break as a joke writer for Bob Hope but then went on to write screenplays like HOUSEBOAT with Cary Grant and Sophia Loren and CAST A GIANT SHADOW with Kirk Douglas. What LaZebnik found at the garage sale was a binder containing an unfinished script that Shavelson had started late in his career. LaZebnik, who purchased the binder containing the screenplay, uses this as the starting point to tell us more about who Shavelson was and what the notated, unfinished screenplay reveals about Shavelson.

LaZebnik's writing is very natural and does an excellent job of painting a picture of the places and people he writes about. In the chapter "A Neighborhood Walk"  LaZebnik writes about the homes of George Wendt and Ed Begley Jr. and how several decades prior the same neighborhood was home to Donald O'Connor, Farley Granger, and Marilyn Monroe who once lived briefly in a guest house in the area. LaZebnik shares little anecdotes as he leads the reader along the way. I felt like LaZebnik was giving me a personal tour of his neighborhood in the Valley and I was right behind him as he pointed out key points of Hollywood history.

If you enjoy Hollywood history you will have fun reading this book. Hollywood Digs is a fast read with each chapter focusing on a different subject. Also to be admired are the over sixty stunning photographs that fill the pages that come from the collection of master photographer, Leigh Wiener. The images include photos of Shirley Jones, Jimmy Stewart, Groucho Marx, and Paul Newman to name a few.

Recommended for fans of books like Peter Bogdanovich's "Who the Hell's in It" or "Celebrity Circus" by Charles Higham and anyone interested in unique Hollywood history.

Hollywood Digs: An Archaeology of Shadows will be released on April 1, 2014.

If you live in the Malibu area, on Sunday, March 30th at 3pm Diesel, A Bookstore will be hosting a publication party with author Ken LaZebnik.

Special thanks to Julia Drake Public Relations for sending a copy of the book for review.
Posted by Robby Cress at 8:38 PM 3 comments: 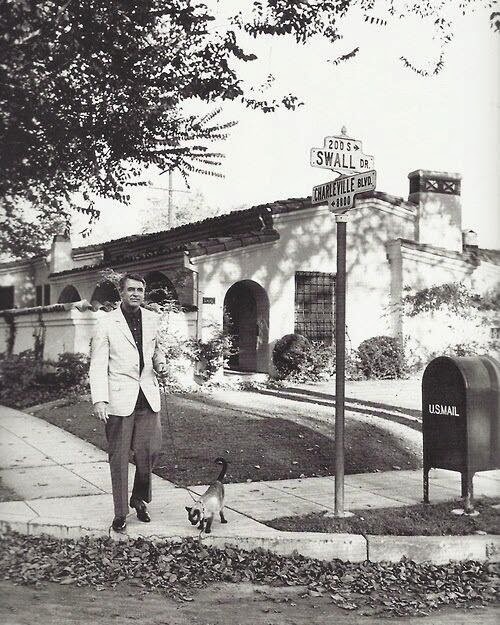 Film scholar and writer Farran Nehme, a.k.a. the "Self-Styled Siren," posted the above picture taken in 1955 of Cary Grant walking his Siamese cat through Beverly Hills to her Twitter page. I couldn't resist looking up this corner of Beverly Hills to see if the location has changed. Below is a Google Street View screenshot showing the same corner.

The location is the southeast corner of Charleville Blvd and Swall Dr in a residential part of Beverly Hills just a couple blocks from the high-end retailers and medical offices on Wilshire Boulevard. Unfortunately, the house that Grant passes now appears to be blocked by tall bushes, however, you can see part of the roof and the small chimney in the back.
Posted by Robby Cress at 12:25 PM 6 comments: