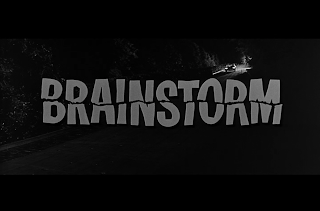 Many times I've watched movies where the story is dull, or the film is ridiculous, but because of some interesting film locations, I'll continue watching. That's not the case with Brainstorm (1965) starring Jeffrey Hunter, Dana Andrews, Anne Francis, and Viveca Lindfors. This film, in addition to having some wonderful real world film locations, is a thrilling story, well acted, with beautiful black and white cinematography. This is a movie I could watch multiple times and I'm delighted that the Warner Archive has made this underrated noir available as part of their MOD releases.

Hunter plays a young and intelligent computer scientist who saves a beautiful woman (Francis) from attempting suicide. He returns the woman to her husband who turns out to be his wealthy enterprising boss (Andrews). Hunter and Francis become romantically involved and the two plot to kill Andrews. Hunter has a complex plan that involves killing Andrews, faking insanity to avoid the murder rap, and then waiting to be released from a sanitarium once he can prove he is safe to reenter society. However, do things ever go according to plan?

Here are some of the filming locations from this suspenseful noir. 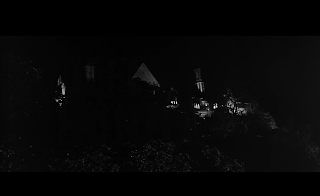 Greystone Mansion as seen in Brainstorm (1965). 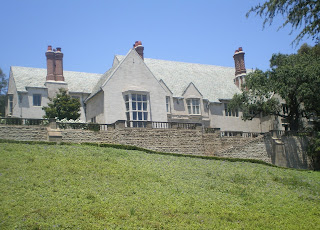 Looking up at Greystone Mansion in Beverly Hills.

The home of Hunter's boss, Cort Benson, is the Greystone Mansion, located at 905 Loma Vista Drive, in Beverly Hills, California. Many films have used the Greystone Mansion as a filming location and the Friends of Greystone website lists a few of these, including some of my favorites, The Disorderly Orderly (1964), Death Becomes Her (1992), and There Will Be Blood (2007). However, the website does not list Brainstorm, so perhaps it can now be added to the list. Above is a comparison view of the rear side of the mansion and below is a comparison of the entrance courtyard. 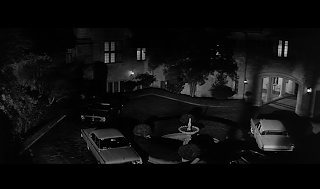 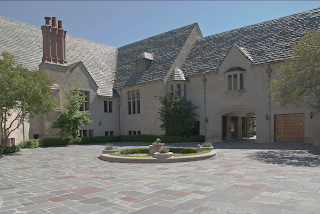 The next location below is what was then known as the Lockheed Air Terminal and today is known as Bob Hope Airport in Burbank, California. The airport has grown and been completely remodeled since the time Brainstorm was filmed. In the comparison below you can match up the screenshot with the contemporary view by looking at the mountain range in the background. I've used a green square to highlight a piece of the mountain range and if you look from left to right you can see how the ridge lines up. 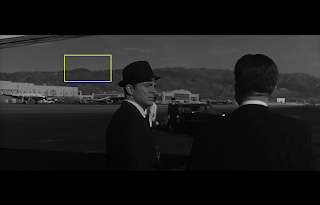 Dana Andrews at was then known as Lockheed Air Terminal. 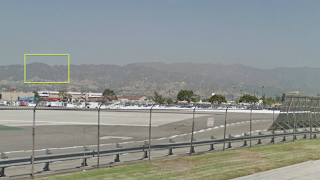 Hunter works at Benson Industries, headed by Cort Benson (Andrews). Benson Industries was really the site of Thompson Ramo Wooldridge Inc. a then high tech computer company located on a large campus-like environment in Canoga Park, California. I recognized the office building seen in this film when I came across a brochure from 1962 promoting Canoga Park as a great place to live and a great place for business. The brochure can be seen in the California State University Northridge Oviatt Library Digital Collections. The Rocketdyne Archives website is another great source of information on this site where many high tech companies were located. 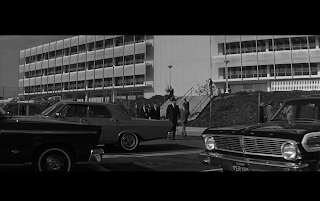 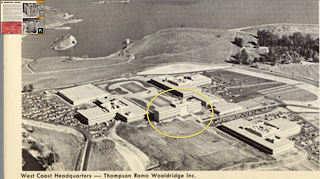 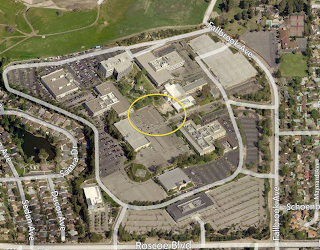 A Bing "Bird's Eye" view of the site today. 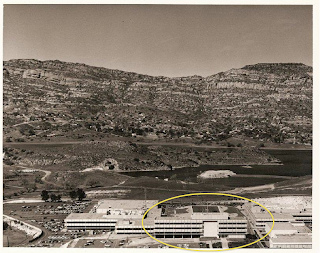 The yellow oval marks the building used as Benson Industries. 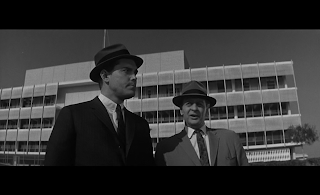 The next comparison shows the gate at the entrance to the Benson Industries campus. The entrance was located on Fallbrook Avenue, just a few blocks up from Roscoe Boulevard. 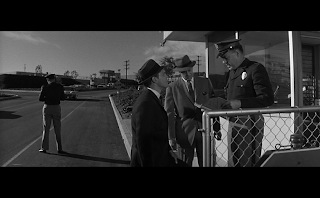 Hunter at the Benson Industries gate. 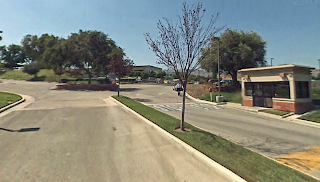 The gate was located on Fallbrook Ave a few blocks north of Roscoe Blvd.

Below, Hunter walks in front of his apartment building, the "Blair Arms." This building is actually the main administration building on the Warner Bros. lot in Burbank. This building has been remodeled dramatically several times over the years, but I was able to identify this location from the door handles that were once attached to the front doors. In the next three images I've used a yellow square to highlight these door handles. In the first image we see Hunter walking past the apartment building. The second image shows the Warner Bros. main administration building as it appeared in 1976 and you can see that the same door handles were still in place at that time. In the third image, a photograph I took just a couple weeks ago, you can see that not only have the door handles been changed, but the entire facade has been completely remodeled. You can still see that the windows on the sides look mostly the same. 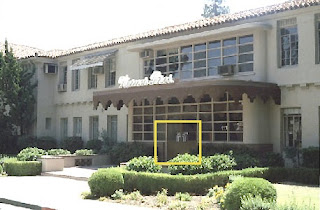 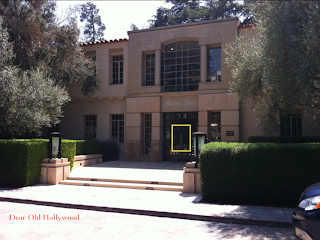 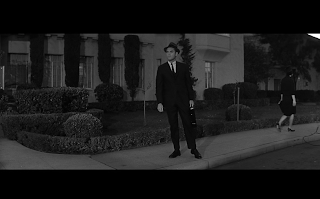 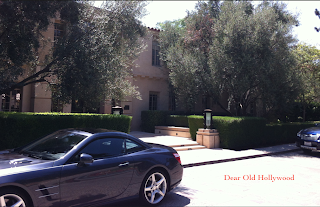 Later in the film Hunter plans to assassinate Andrews while he is giving a speech at the International Hotel, which today is the Radisson Hotel located at 6225 West Century Boulevard, Los Angeles, right next to the LAX airport. 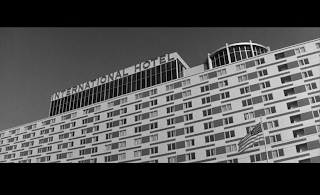 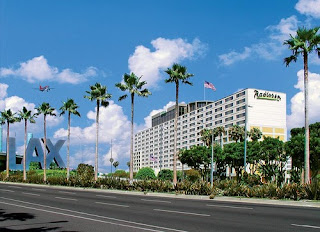 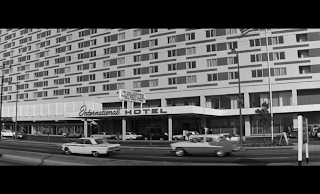 The hotel entrance as it appears today. 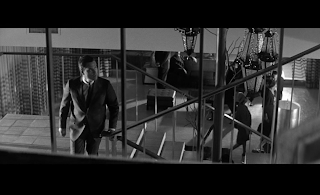 Hunter walks the hotel stairs from the main lobby. 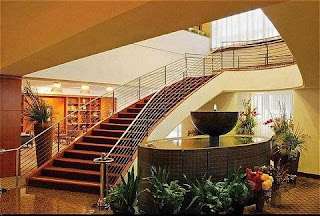 A contemporary view of the hotel stairs.

At the end of the film Hunter is taken to the State Mental Hospital which in reality is the site of the Veterans West Los Angeles Health Care campus. About five years ago I attended a theatre performance put on by the Reprise Theater Company led by actor Jason Alexander (sadly I just learned the Reprise Theatre Company recently ceased operations) which was held at a building on this large veterans campus. It was my first time on the campus and actually the last time I was on the campus, but the appearance of the location has always stayed in my mind. My first instinct was to search the VA grounds and when I started looking at the sprawling campus using Bing Bird's Eye I was immediately able to pin point the area used in the film.

The purple circle below marks the spot on the VA health care campus where Jeffrey Hunter is being accosted by the security of the State Mental Hospital. The exact location on the campus is located between Patton Ave and Bonsalle Ave. 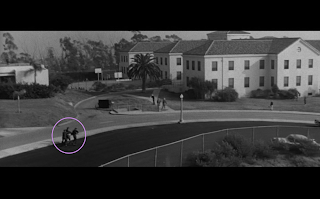 Hunter being dragged back to the State Mental Hospital. 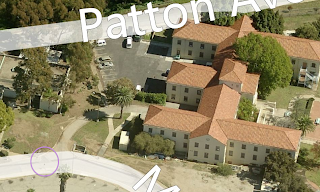 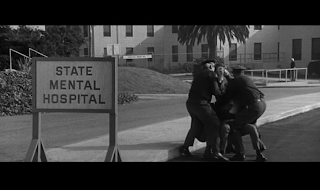 Hunter at the State Mental Hospital. 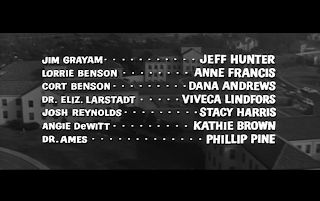 Aerial view of the mental hospital. 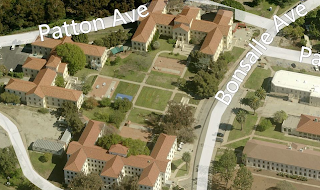 Brainstorm (1965) is available on DVD through Warner Archive and is currently available for streaming on Warner Archive Instant. The film can also be rented through ClassicFlix. I highly recommend this film.

All screenshots (c) Warner Home Video
Posted by Robby Cress at 8:05 AM 5 comments: