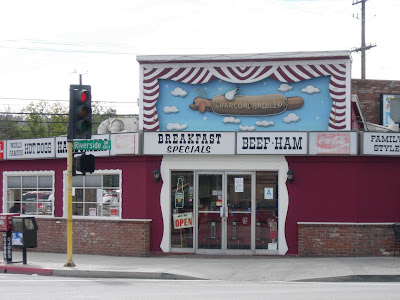 The very first eatery I had ever eaten at in Burbank, Ca was a tiny 1950s era hot dog stand. I remember driving over the hill from Hollywood into Burbank, on my way to the Disney Studios, and needed an inexpensive place to grab a bite for lunch. I turned West down Riverside drive, heading the opposite direction of the Disney Studios by mistake and saw this old fashioned hot dog hut. By appearance alone I thought the place was worth checking out.

The food is what you would expect. Hot dogs. Lot's of hot dogs, pretty much served with any toppings you can think of. There also burgers and other food from the grill, but the hot dogs are the way to go.


Hollywood history fans will be interested in Papoo's as being one of the locations in the 1956 film, Invasion of the Body Snatchers. 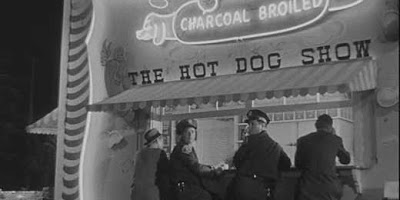 Above is a still from the movie Invasion of the Body Snatchers where you can see some of the characters eating at Papoo's Hot Dog Show. I believe then it was known just as "The Hot Dog Show." At the time, Papoo's was an outdoor eatery, but the restaurant has expanded over the years and now includes indoor seating. Here are some pictures of how Papoo's Hot Dog Show looks today: 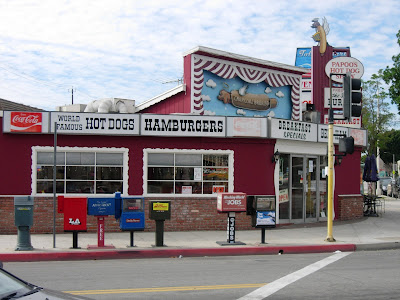 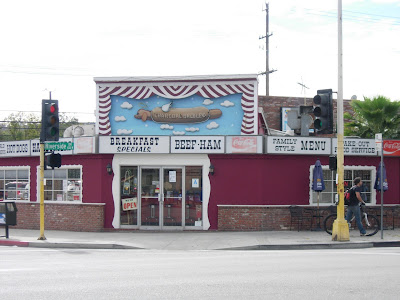 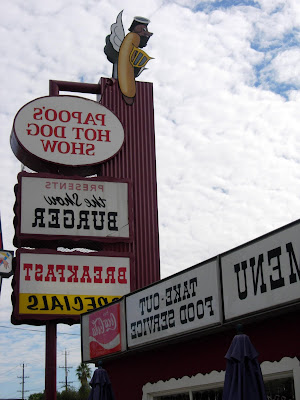 Papoo's is located only a few blocks from Warner Bros. Studios and just a short drive down the street from the Disney Studios lot, so I'm sure, that over the years many celebrities of the past and present have made a stop at this joint. Bob Hope and Roy Disney both had homes nearby and I wouldn't be surprised if either one of them have stopped by before. Today, many of the Disney teen actors live in the neighborhood, including Hillary Duff, Zac Efron, Miley Cyrus and many of the cast from High School Musical.

Here's a photo of Hillary Duff leaving Papoo's this past summer: 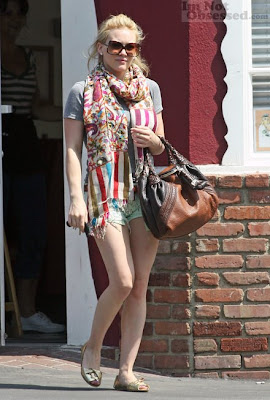 For more pics of Hillary visit here.
If you're coming to visit the Warner Bros. or Disney Studios, Papoo's Hot Dog Show is definitely an excellent and cheap place to grab a bite.
You're thoughts.
Posted by Robby Cress at 7:34 PM

I love hot dogs. That will have to be a must stop. Good article Rob.
Bill

Oh my! This is pretty freggin' amazing!!

A) Hot Dogs are the best.
B) We called my maternal grandpa 'Papoo'.
C) Never got to eat there, and is right next to Cinema Secrets!

I had not heard about Papoo's closing. That's too bad. I wonder if business hasn't been good lately or if the owners are looking to retire or what the case may be? Thanks for the heads up.

They closed this past Sunday. Apparently they were not up to code on the city's health regulations. And to get it there would cost them money they didn't have. So, there you have it.