The View from Paramount Studios 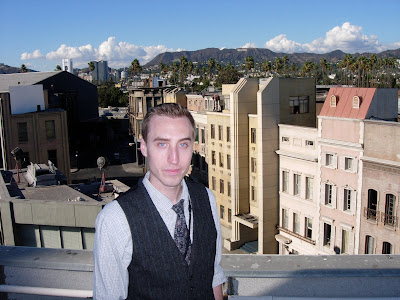 Yours truly at Paramount Studios backlot c. 2006
This is a picture of me taken a few years ago from one of the rooftops of the Paramount Studios backlot. It's one of my favorite pictures because you can see so much. If you look closely in the background you can see the famous Hollywood sign. Where all those palm trees are standing that is the Hollywood Forever Cemetery, the resting place for many old Hollywood stars, including C.B. Demille, Rudolph Valentino, and Douglas Fairbanks. In the left corner you will see a tall building wrapped in what looks like a white trash bag. That building stands on the corner of Sunset & Vine and is one of the towers that is almost destroyed in the 1974 Universal film Earthquake. Just to the right of that you can vaguely see what is the iconic Capital records building. And of course immediately behind me are the fake buildings that have been the backdrop for so many films, TV shows, and commercials. But, you know what I like about this photo most of all? No smog! That is a rare thing in Los Angeles.
Posted by Robby Cress at 7:21 PM

We enjoyed the tour you gave us of Paramount a few years ago. I enjoy reading your blog on the history of Hollywood.
Bill