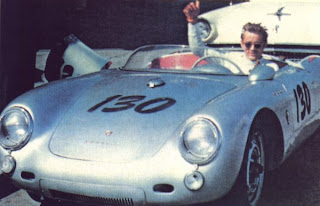 James Dean
On September 30, 1955 James Dean would take his final ride. After completing filming on his last film Giant, Dean was preparing to leave Hollywood for Salinas, California to enter a racing competition. Of course, he never made it to the races. Dean died in a major car crash on his way there. Here are some of the places Dean was on that final day. 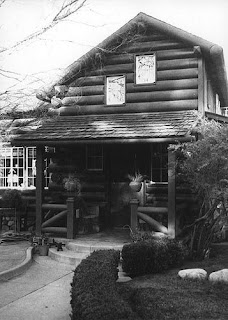 James Dean's Home in Sherman Oaks
Prior to his death, James Dean was living in a log cabin house at 14611 Sutton Street, in Sherman Oaks, California. He rented the home from Nicco Romanos, the maitre d' at the Villa Capri, Dean's favorite restaurant, for $250 a/month plus utilities. The house had no bedroom, only a second floor loft. Guns belonging to Romanos decorated the place, along with Dean's bongos and bull fighting paraphernalia. Dean had a fascination with matadors, collecting bull horns and posters of bull fighters.
The morning of September 30, Romanos paid Dean a visit at 7:20a.m. Romanos made Dean coffee and got him going for the day. By 7:45a.m. Dean was leaving his home to pick up his friend and fellow car enthusiast Bill Hickman 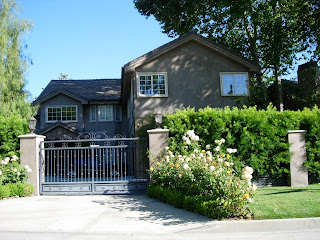 14611 Sutton Street, Sherman Oaks as it appears today.
Dean's log cabin home has been replaced by this house.
Dean drove his Ford station wagon which towed his Porsche Spyder race car, over to Bill's home. After picking up Bill, the two drove down Sunset Boulevard and turned onto Vine Street, arriving at Competition Motors. The Spyder needed some final adjustments in order to be race-ready, so Dean left the car with the German mechanic Rolf Weutherich.
By 9:45a.m. Sanford Roth, a photographer, arrived at Competition. Roth had been following Dean for several days as part of  a photo essay he was doing for Collier's magazine. Roth was to continue his essay by taking photos of Dean up at the races. 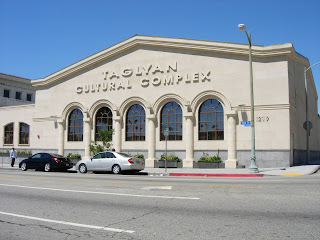 1219 N. Vine Street, Hollywood, California
(former site of Competition Motors, now a banquet hall)
Shortly after Roth arrived at Competition Motors, Dean's father and uncle came to visit. While Dean, his friends and family waited for the race car to be finished, the group walked a couple blocks down the street to the Hollywood Ranch Market where they had doughnuts and coffee. This market no longer exists and is not to be confused with the Fairfax Farmer's Market which still exists over on Fairfax and 3rd Streets. 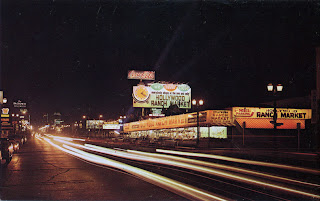 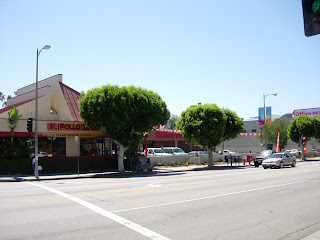 Former site of the Hollywood Ranch Market on Vine Street 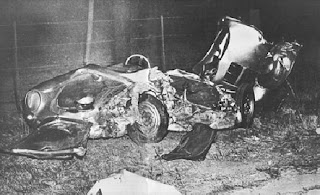 Dean's Porsche Spyder after the crash.
By around 1:30p.m. Dean and his entourage were headed for Salinas. Dean drove his Porsche Spyder, with his mechanic, Weutherich, as his passenger. Hickman and Sanford followed in the station wagon.  Of course, Dean never made it to the races. Dean had a major collision with a 1954 Ford Tudor which hit head on. The accident was at the intersection of Highways 46 and 41, not too far from Paso Robles, in Cholame, California.
Posted by Robby Cress at 8:21 AM

WOW! I have never heard the story about the car crash. Thank you so much for sharing.

It's unbelievable that the passanger survived the crash.

Thanks so much for the research. I've been reading about Jimmy and his final day for years, but still didn't know the exact locations where they stopped for car repairs or doughnuts and coffee. Though it makes me sad, I enjoy knowing those details.

Thanks for posting! I'm a James Dean fan. I enjoyed the pics. :)

One of the officers at the scene has died:

While Bobby Cress' post about James Dean's final ride is informative with some nice photos...some of the facts aren't as accurate as they could be. Dean didn't trailer the Porsche to Competition Motors on 9-30-55 from Sherman Oaks. The Porsche had been dropped off the day before so mechanic Rolf Wutherich could start preparing the race car very early in the morning. The borrowed trailer was waiting at Competition Motors. Dean did not pick up Bill Hickman, as Dean drove the station wagon to Competition Motors by himself. Hickman and photographer Sanford Roth arrived together at Competition Motors in Hickman's car at 10 a.m. Dean, his father, Winton, and Uncle, Charlie arrived at 11 a.m. and walked across the street from Competition Motors to the Hollywood Ranch Market for coffee and donuts. The fatal accident occurred one mile east of Cholame at CA junction 466/41 with 24 year old Donald Turnupseed, driving a 1950 Ford Custom coupe, which skidded across the center line while turning left into the oncoming Porsche 550 Spyder. The Spyder spun into the Ford, but not head-on. Lee Raskin, James Dean historian/author, James Dean At Speed, 2005 (Amazon.com)

Thanks for the comment with the details. A lot of the times and details of Dean taking his Porsche on the trailer to Competition on the day of, come from the book , "The Death of James Dean: What Really Happened on the Day He Crashed?" by Warren Newton Beath. In his book he mentions that Dean, "at a quarter to eight he stepped out of the front door. There, on the trailer hooked to the ball hitch of his Ford station wagon, was the Spyder." He then goes on to discuss picking up Bill Hickman and that they drove to Competition Motors where Rolf Weutherich was waiting for them. According to Beath, he mentions that "at a quarter to ten, Sanford Roth came through the door" and then "at ten a.m., Winton Dean, Jimmy's father, arrived. With him was his father's younger brother, Charles Nolan Dean. Charles Nolan was visiting from Indiana with Marcus and Ortense Winslow." Beath goes on to say that Weutherich was finished with the car at about 1pm.

Not sure which author is correct. I've read some of other Dean bios that are out there and there seems to be many discrepancies about Dean, and not just about what happened the day he died. I guess a lot of it depends on who was interviewed and how good there memory was of the events.

Thanks again for sharing.
Robby

With respect to the above thread....September 30, 2015 will commemorate the 60th Anniversary of Jame Dean's traffic death at Cholame, CA. A definitive photo narrative will be published by Stance & Speed detailing the day by day, hour by hour circumstances leading up to James Dean's accident, the State of California Inquest, and the events over the past 60 years pertaining to the disappearance of the Porsche 550 Spyder, "Little Bastard." Look for the rolling out of this long awaited publication on Amazon.com and through local distributors of elebrity and motorsports books. Lee Raskin, James Dean historian/author

I don't recall any death of the 20th Century other than Pres. Kennedy's & Marilyn Monroe's that has been so analyzed, dissected, researched, & /or theorized more than James Dean.The real question we really find, actually in all 3 deaths is a question that is unanswerable, & that is "WHY ? " We drove the road at about 5:30 p.m.many years ago & It was very lonely, eerie, & almost haunting. It was like no other place I'd ever felt that way about.