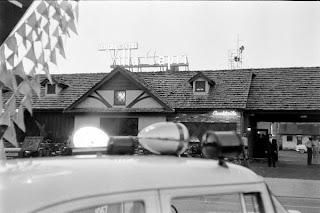 Villa Capri Restaurant in Hollywood, CA Photo (C) LIFE
A few weeks ago I did a post about James Dean's final day and I mentioned how Dean was living in a log cabin home that he rented from the maitre d' of the Villa Capri restaurant in Hollywood. Dean was a frequent visitor at the Villa Capri, as was Frank Sinatra, Dean Martin and many other Hollywood legends. The restaurant deserves its own blog post but instead of doing a post here, I think you should check out the great website that Filomena D'Amore has put together: http://www.patsydamore.com/ 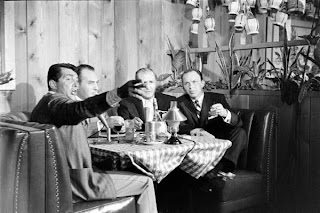 I had no idea this place existed and I eat at the Smokehouse every time I'm in Hollywood. Is the food better than the Smokehouse because...? While the cheese bread and cheeseburger are second to none, everything else is a bit, meh. The ambience is everything.

I used to live next door of "Villa Capri" and after a few months I moved half a block across Villa Capri,
at McCadden Place across from "Don the Beachcomber," when I used to be the night manager at the "Hollywood
Theatre." Those were the years.