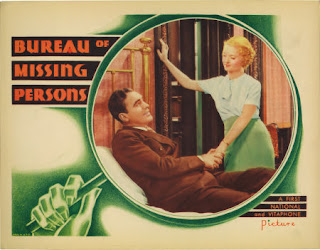 (c) Warner Bros. Entertainment
Bureau of Missing Persons, the second on-screen pairing of Pat O'Brien and Bette Davis, is not the greatest film in either actor's filmography, but this fast paced film does have some fine moments. The weakness is in the story, but seeing performances by a young O'Brien and Davis, as well as the comedic Allen Jenkins, make it worth watching at least once.
In this screwball crime story, O'Brien plays Butch Saunders, who is assigned to work in Missing Persons because he was too brutal in his previous police assignment. After successfully solving his first Missing Persons case, Butch is assigned to find Norma Robert's (Davis) missing husband, Therme. Butch is attracted to Norma, so when he finds out that she is wanted for murder he doesn't believe it.  When Butch is sent to arrest Norma he lets her go. Later Norma's clothes are found at a dock and it appears that she has committed suicide. Butch doesn't believe Norma has killed herself so he stages a fake funeral where both Norma (who has come to see her own funeral) and Roberts have been lured out of hiding.  Norma informs Butch that Roberts killed his twin brother making it appear that he himself was dead in order to escape embezzlement charges. Butch and Norma chase down Roberts to bring him into the police department to prove his guilt and Norma's innocence.
I've tracked down most of the film locations seen during the chase scene and I'm amazed that for the most part, the locations have changed very little in nearly 80 years! 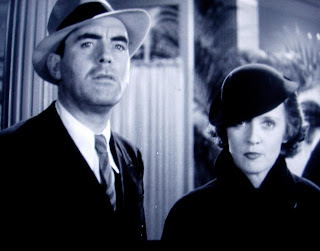 Pat O'Brien and Bette Davis
In this first location we see Roberts making his getaway, driving down 8th Street in downtown Los Angeles and making a left onto Spring Street. You will notice that all of the buildings in the background are still standing today. The hotel in the center of the screenshot is still a hotel today. 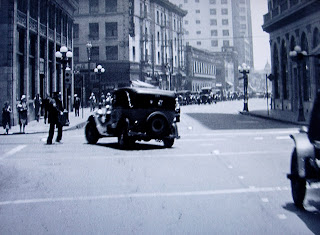 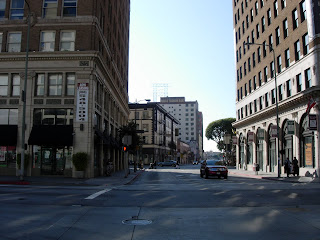 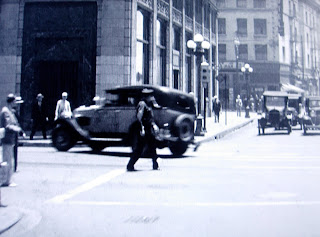 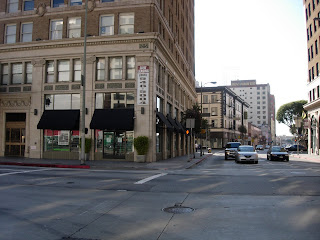 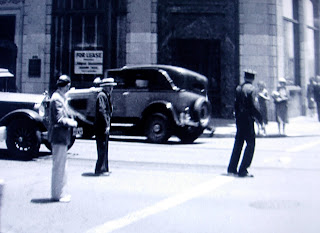 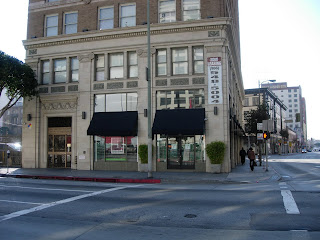 8th Street at Spring Street
This next location took me a while to find. I kept second guessing myself. I wasn't absolutely sure if this was the location I thought it was, but then I found the proof I needed. The clue that made me certain that I had found the correct location is the "Brack Shops" sign in the upper right corner of the screenshot. I knew that the former Brack Shops building was located on Seventh Street and that presently it is known as the Collection building. In the next scene we see Roberts being chased down Seventh Street near the intersection of Olive. You can also see this same intersection from different camera angles in my previous posts on the film locations for the Joan Crawford film Possessed (1947) and the Charlie Chaplin film, City Lights. What I find amusing is how Bette Davis used this same film location 14 years before her famous antagonist, Joan Crawford. 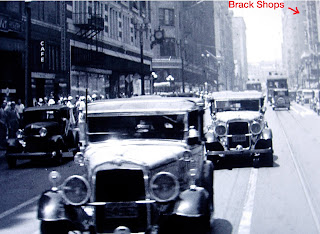 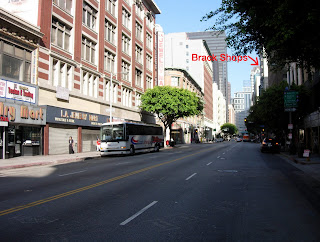 Seventh Street near Olive, Los Angeles
This third location also took me a while to find. You will notice in the screenshot that the cars are driving by a corner building with theatre popcorn lights. Immediately, I assumed it was the former downtown Los Angeles Warner Theatre. It was the only theatre that I knew of that had a rounded marquee like that and was located on the corner of an intersection. The thing that bothered me though was that none of the background buildings where the Warner Theatre stands matched up with what is seen in the film. After doing some further research on downtown LA movie palaces I came across an old photo for the RKO Hill Street Theatre which stood at the intersection of Eighth Street and Hill Street. This theatre, like the Warner, was also located on a corner and had a rounded marquee. However, the RKO theatre was torn down sometime in the 1960s. When I went to the corner of Eighth and Hill, although the theatre is long gone, all the other buildings in the background are still standing and very recognizable. See for yourself. 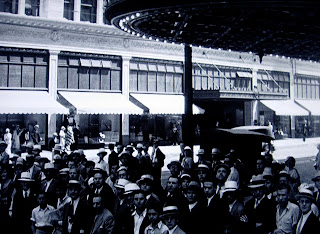 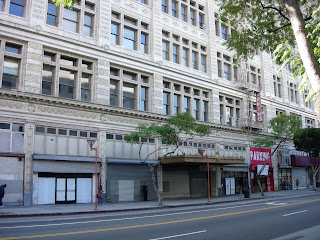 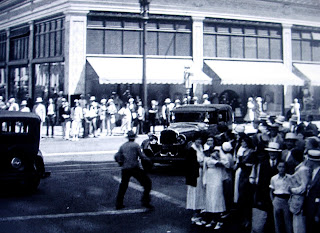 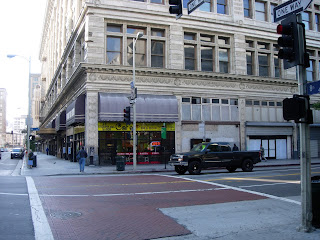 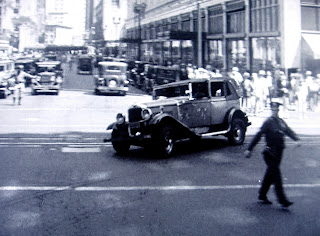 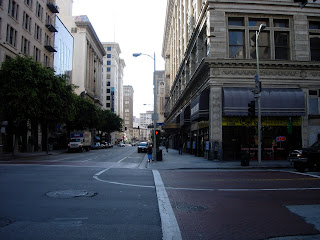 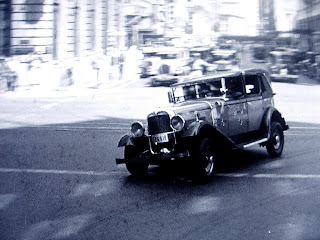 Another view of Eighth Street 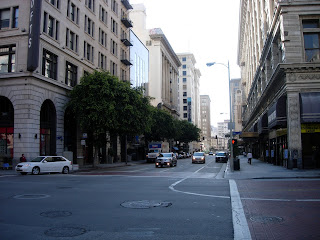 Another view of Eighth Street
This last location was the easiest to find. I recognized it immediately. This is part of the Warner Bros. backlot known as "Brownstone Street." What is incredible to me is how little this part of the Warner Bros. studio has changed since 1933! Of course, you probably will recognize thousands of films that used this location over the last several decades. 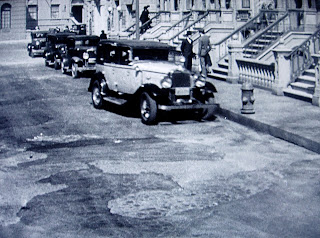 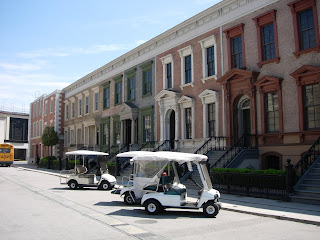 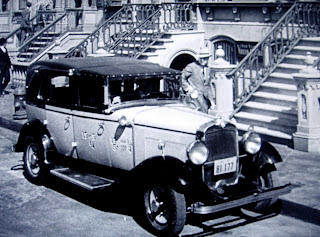 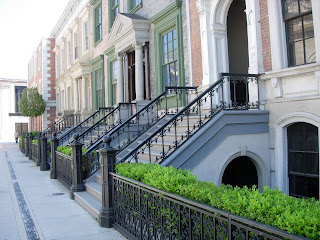 A closer look at Brownstone Street
Bureau of Missing Persons may not be the greatest film, but like I said, the film has its moments. My favorite scene is one of O'Brien and Davis sitting at a lunch counter inside of a diner. A man to their right asks for some sugar, so O'Brien slides the container. Next, a man to their left asks for the ketchup, so Davis slides the bottle down the counter. Then O'Brien asks for the sugar, salt, ketchup, pepper and everything comes sliding back at him all at once in one mess.
If you would like to see Bureau of Missing Persons for yourself, it is available through the Warner Archive Collection.
Your thoughts?
Posted by Robby Cress at 8:33 PM

i'm always amazed at your patience for searching out these streets and buildings. great detective work as always! :)

Fantastic! I'm so glad that you are a champion for classic films and I appreciate that you take the time to research these locations, get the screen grabs, take pictures, etc. This is wonderful!

WOW! I am constantly amazed at your detective work!

Thanks for being patient with me and my endless sleuthing :)

Thanks for the comment. It's always nice to hear that others are just as interested in exploring the world of classic movies through their locations.

This post certainly did take some detective work. Thanks
for the kind comment and glad you enjoy.

You needn't have second guessed yourself. Clearly the space in that building has been FOR LEASE for seventy-eight years!

Yes! How funny is that. I can't believe 78 years later, the same building that had a "For Lease" sign STILL has a leasing sign. I wonder how many people will have caught that.

This is truly amazing!! You are a great detective. I added your post to my Bureau of Missing Persons, post. Over at Noir and Chick Flicks. :)