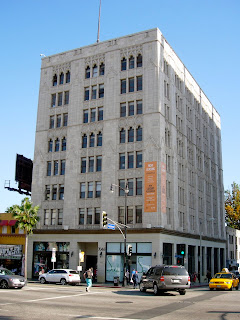 Hollywood Professional Building
Long before Ronald Reagan was elected president of the United States of America, the Warner Bros. contract player would hold the position of president of the Screen Actors Guild (SAG). Reagan attended his first SAG Board meeting on August 11, 1941. By 1946, he was elected 3rd Vice-President and in another six months he would be nominated for president. The 1940s were tumultuous times for the movie studio unions and Reagan impressed many on the SAG Board with his handling of the violent studio union strikes. Fellow actor Gene Kelly would nominate Reagan for SAG president, a position Reagan won and would hold for seven terms.
Reagan's SAG office was located on the eighth floor of the Hollywood Professional Building at 7046 Hollywood Boulevard, near the Roosevelt Hotel and the Chinese Theatre. The building has now been converted into a high-end apartment complex, appropriately called SEVENTY46. 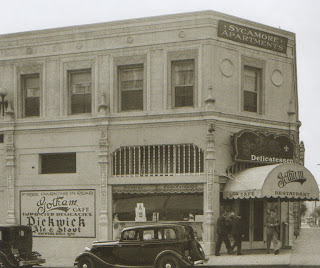 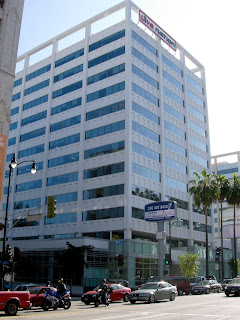 Former Site of Gotham Delicatessen
Across the street from the Hollywood Professional Building was Gotham, a popular delicatessen and bar. The Gotham Delicatessen was a favorite spot for New York transplants ever since it opened in 1924. During the 1940s, when radio networks were located all throughout Hollywood, many of the radio stars would drop in for dinner. After late-night sessions at the Guild headquarters, Reagan and other board members would often walk over to Gotham to eat and drink and discuss Guild business.

William Holden, Ronald Reagan, Dana Andrews
In Bob Thomas's biography on William Holden, actor Dana Andrews recalled one occasion when he joined Holden and Reagan for dinner at Gotham. "After a meeting, Bill, Ronnie and I went to the Gotham to continue our discussion. All three of us ordered drinks, and after we had talked for a while, the waiter came to the table and Bill and I ordered another round. Ronnie said with surprise, 'Why do you want another drink? You just had one.' See what happened: Bill and I became alcoholics and Ronnie became President of the United States."
Posted by Robby Cress at 3:56 PM

That story is great!

Had always ignored the SAG corner as I walked by. Thanks for the hot tip!

Wow, I learn so much from your posts!

I used to have an office in that building that now houses Live Nation.