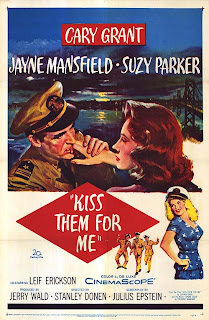 The film Kiss Them For Me (1957) is a bit of a mixed bag. Although this comedy directed by Stanley Donen is weak on plot and doesn't deliver many big laughs there are still quite a few things that make this film worth watching including Cary Grant, some nice San Francisco filming locations, Ray Walston in his first film role (you know, "Mr. Hand" from Fast Times at Ridgemont High!), bombshell Jayne Mansfield, and some of the fashions.

The film is about three Navy pilots, all war heroes, who are on leave in San Francisco for four days. They are put up in a posh suite in a fine hotel and Commander Andy Crewson (Grant) plans to fill the suite with girls, booze and music. Meanwhile Lieutenant Wallace is trying to get the pilots to make speeches that will rally the homefront for the war effort but after several months in combat all the pilots want to do is have some fun - not give speeches.

The hotel where the three pilots stay is San Francisco's historic Fairmont Hotel, located at 950 Mason Street. In the next few screen comparisons below we see the pilots, Cary Grant, Ray Walston and Larry Blyden, being driven down Mason Street to the hotel entrance. On their way to the hotel they pass the Brocklebank Apartments located at 1000 Mason Street which was also a key filming location in another film that is a personal favorite, Impact (1949) starring Brian Donlevy. 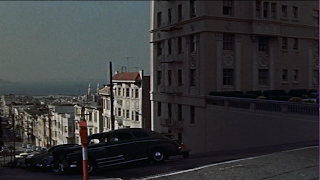 Looking North down Mason Street from the Brocklebank Apartments. 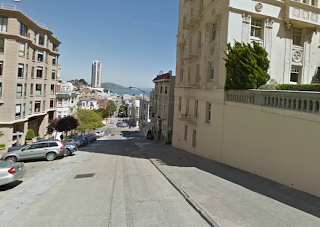 Looking North down Mason Street from the
Brocklebank Apartments as it looks today. 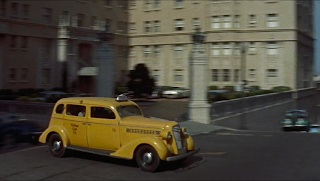 The taxi passes the Brocklebank Apartments. 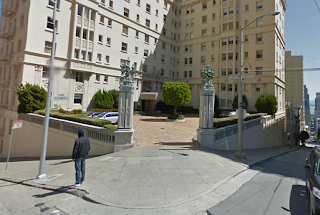 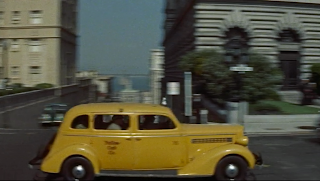 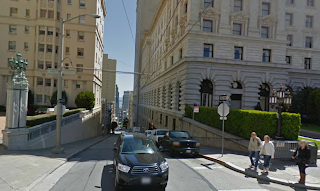 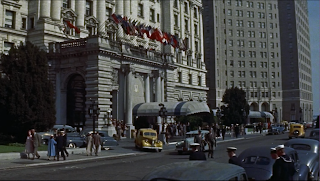 The taxi arrives at the Fairmont Hotel. 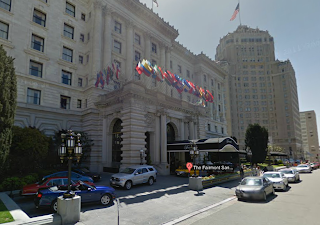 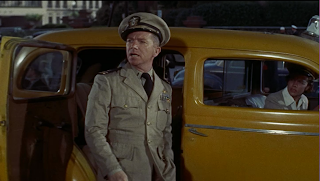 Walston gets out of the taxi at the Fairmont.

Behind Walston is the Pacific-Union Club a private
social club across the street from the Fairmont Hotel. 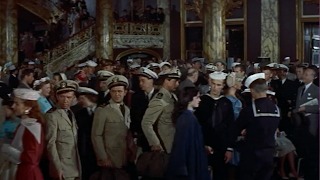 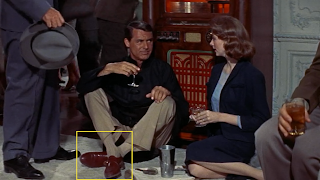 Just a side note: The August 2012 issue of GQ magazine has a four page spread praising the monkstrap dress shoe, so I thought it was interesting in the scene above with Grant sipping a martini on the floor with Suzy Parker, to see that he is wearing a pair of monkstrap shoes. Cary Grant never goes out of style! 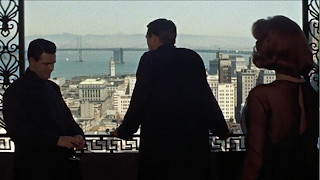 A view of San Francisco from the Fairmont Hotel.

In the next scene Grant and Parker leave the Fairmont Hotel and board a trolley to a nightclub. The trolley heads away from the hotel going East down California Street but when they got off the trolley they are a few blocks Northeast from the hotel at the intersection of Powell and Washington in front of the Low Apartments building. 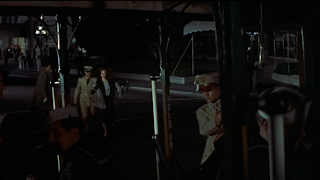 Grant and Parker board a trolley. Mason St. at California St. 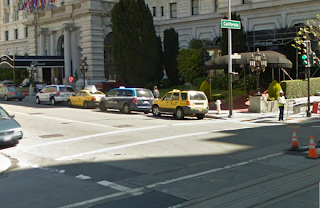 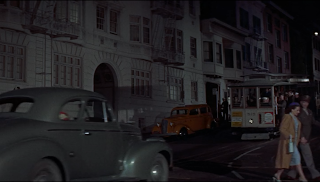 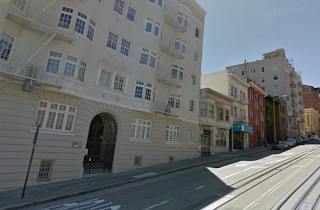 When Grant and Parker get off the trolley at the corner of Powell and Washington, it looks like they are walking across the street to the nightclub, but in reality the nightclub location is a half mile away at 498 Broadway Street. 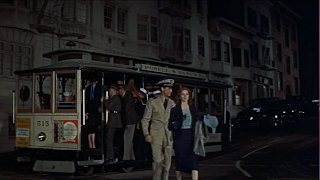 Grant and Parker leave the trolley at Powell and Washington. 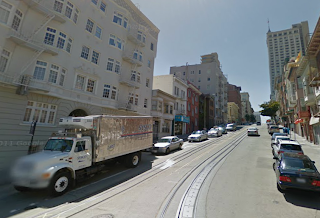 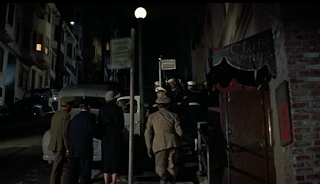 Looking up Kearny Street from Broadway. 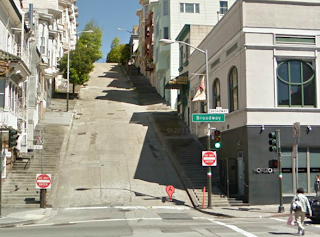 Looking up Kearny Street from Broadway.

Using the historic photographs available from the San Francisco Public Library I tried searching for old clubs and restaurants and eventually I came across an old photograph of a restaurant called "Vanessi's" (see below). Immediately when I saw the photo of Vanessi's restaurant I knew that that was the correct location for the nightclub scene. I also noticed that in the screenshot below with Grant and Parker standing in front of the Club are the numbers "49" and the address of Vanessi's happens to be "498" Broadway. See the yellow squares in the images below. Click the images to enlarge. 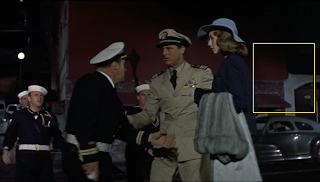 Grant and Parker at 498 Broadway, in front of the nightclub. 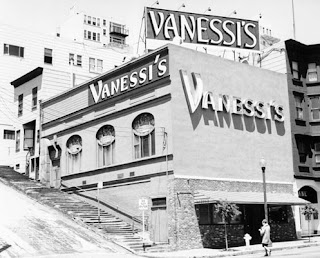 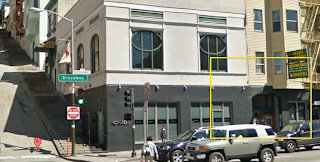 In one of the last scenes of the film Grant and Parker are seen riding in the back of a taxi on their way to the shipyards. Along the way they drive down Hyde Street towards Lombard Street, the "Crookedest Street in the World," and then making a left down Lombard. In one view we can see Alcatraz Island in the distance and once they round the corner on to Lombard we get a view of Coit Tower in the background. 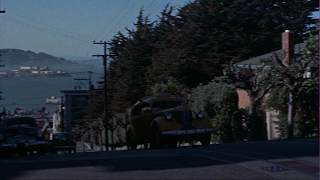 Looking North down Hyde Street from Lombard Street.
Alcatraz Island can be seen in the background. 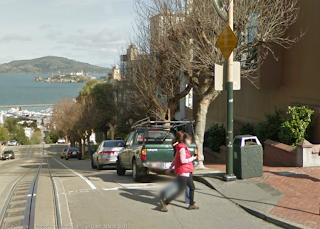 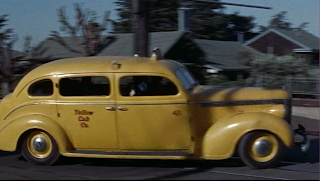 The taxi turns left down Lombard St. from Hyde St. 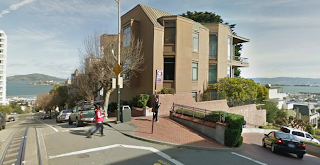 The small house at the corner of Hyde and Lombard is now gone. 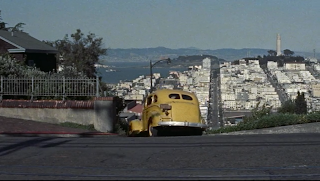 The taxi heads down the crooked Lombard Street.
Coit Tower can be seen in the background.

Even though the overall story for Kiss Them For Me may not be great, I still think this movie is worth watching for the reasons I mentioned before. The film is currently available for streaming on Netflix and is also available on DVD.

always enjoy your posts but as a bay area local, is nice to see sf show up. haven't seen this film- you've piqued my interest.

Wonderful post! You do such a great job lining up the now and then shots.

Fantastic job, Robby! As soon as I saw the Brocklebank Apts. I thought "I know that building!" and you reminded me why. (I loved IMPACT.)

Glad to hear I got some Bay Area interest. I use to write exclusively about the LA area but have been starting to venture out occasionally - so maybe NoCal may pop up again in the future.

I'm excited to hear another person is familiar with IMPACT. I think it is such an underrated film so I couldn't help tying in the connection with KISS THEM FOR ME.