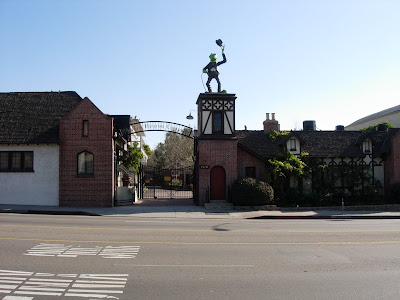 1416 North La Brea Ave, Hollywood, CA
Above is the entrance to Jim Henson Productions on La Brea Avenue, in Hollywood, CA. If you look on top of the building you will notice that Kermit the Frog is dressed as another famous icon - Charlie Chaplin. That's because this building was originally constructed as the Chaplin Studios. 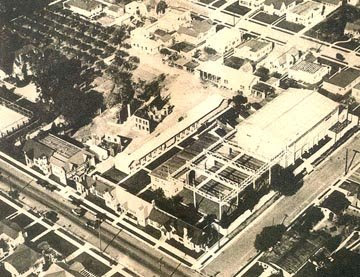 If you look at the aerial shot of the Chaplin Studios you will notice that the studio was located in a very residential neighborhood. Today this same area is in the center of a commercial area. There are strip malls and businesses all around. But, when Chaplin decided to build his studio in this location it was quiet and residential. The neighborhood was not happy with the idea of a movie person coming into their community and building a studio. To appease his new neighbors Chaplin had his studio constructed so that the buildings on the perimeter resembled an English Village. If you look at the photo below you can see how nice the studio looked. It certainly doesn't look like a movie studio from the outside. 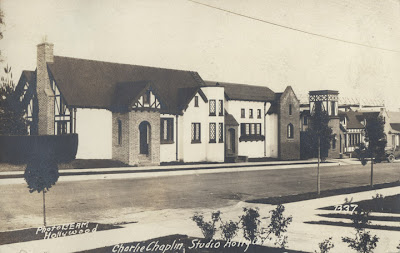 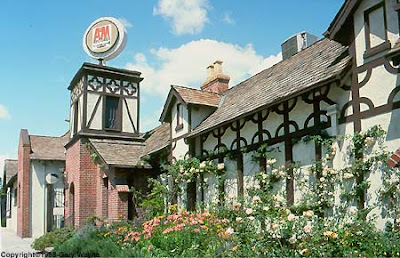 Chaplin Studios as A&M Records Headquarters (C) Gary Wayne
The Chaplin Studios was constructed in 1917 and opened in 1918. Many of Chaplin's greatest films were shot here including The Kid, The Gold Rush, City Lights, Modern Times, and The Great Dictator. In 1952 Charlie Chaplin, who was a target of the McCarthy witch hunts, left the U.S.A. for Europe. The studio was then bought and sold several times. Other owners have included CBS, American International and Red Skeleton. In the 1950s episodes of the tv series Superman were filmed here. By 1966, A&M Records made the Chaplin Studios it's headquarters. During the A&M days many music videos were filmed here including "Every Breath You Take" by the Police and Ray Parker Jr.'s "Ghostbusters." The Jim Henson Company took over the property in 2000. 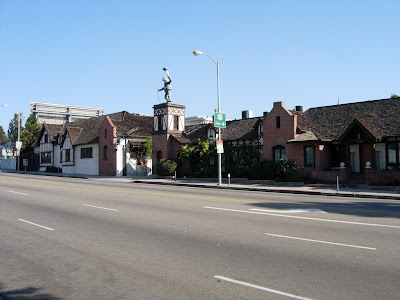 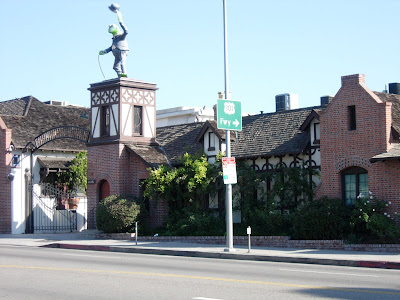 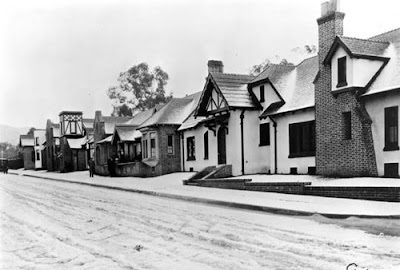 Above is a photo of the Chaplin Studios covered in snow from 1921. This a rare sight in Southern California.

Smashing post, love the Chaplain studios covered in snow, it's rare here too we just had the heaviest snow coverage in 18 years.

Interesting. The architecture is unusual especially for California. It must be global warming. I know you've always had an interest in Chaplain. Keep it the good work.

I love Chaplin, so naturally I am dying to see the studios myself! Awesome post :)

Awesome post, Rob. Was very entertained by the history of Chaplin Studios.

I just posted another comment elsewhere. My Chaplin location book Silent Traces has a lengthy chapter about the Chaplin Studio. I was given a private tour, and so have maps, aerial photos, and many comparison photos of how the studio looked in Chaplin's private movies to how it looks today.

I walked past the Chaplain studios on my way to school at Blessed Sacrament parochial school on Sunset Blvd. That was in the early 50's. My mother ran a boarding house about two blocks away from the studio. Many boarders worked at Chaplain Studios.

The most outrageous thing I witnessed was two WWll fighter planes in a mock dogfight over the Chaplain Studios. Even at 12 years old, that struck me as pretty reckless..even for Hollywood.