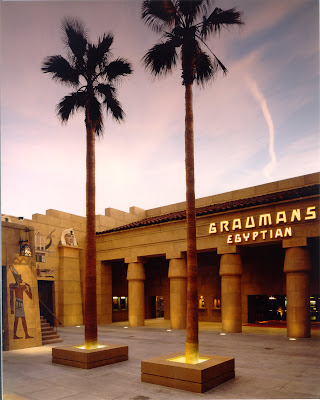 Egyptian Theatre, Hollywood - Photo from Picasa Web Albums
On Saturday, January 31, I attended the "The Story of Hollywood" slide show presentation by author Gregory Paul Williams at the Egyptian Theatre. I was hoping to get some video footage from the presentation but it was just too dark to get a good recording from my little camera. Nevertheless, the presentation was an intense educational experience. Mr. Williams shared at least a 100+ images from his collection of Hollywood photos which were projected onto the Egyptian's huge movie screen while he discussed the evolution of Hollywood as a town.
In his collection of photos were images of Hollywood as farmland, photos of homes, churches, and other buildings that are now long extinct, rare pictures of projects that were supposed to be built but never completed and even some photos of some of the characters that have added to the color of Hollywood. My favorite images included photographs of the first studios that made Hollywood their home but later left for Burbank, Culver City, or other surrounding areas. Those early studios then became ghost studios, sitting vacant until they were eventually torn down.
Some of the other images I found quite interesting included photographs of Hollywood during the early twentieth-century showing these large pepper trees that lined the streets. The trees looked beautiful but were apparently very messy, leaving tree droppings everywhere, but were at the time were almost a symbol of Hollywood, the way palm trees are thought of today. Eventually, the pepper trees were cut down but not without some opposition. Mary Pickford even led a save the pepper trees campaign.
Williams gave a 2 1/2 hour presentation and could have gone on for hours more. He could have done a presentation just on the history of LA drive-ins or just the Hollywood Hotel. When Williams wrapped he went to the theatre's lobby to sign copies of his book, "The Story of Hollywood." 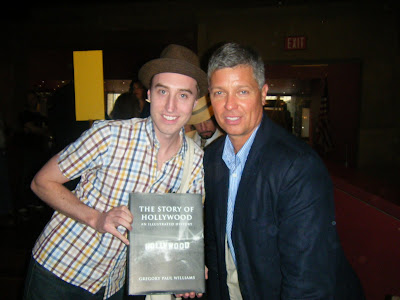 Me with author Gregory Paul Williams

Although I wasn't able to get any video footage of the presentation, here is a clip of author Gregory Paul Williams signing copies of his book. The woman in the video getting her book signed is a sweet lady I met in line. She grew up in Hollywood and had worked at Paramount for several years as a script supervisor. I only wish I would have remembered to get her information before she left to so I could maybe hear some of her stories about the days of Paramount's past!

Neat! I'll bet that was a fun event. I read your earlier post on his book and I can't wait to find a copy.

I bet that was an interesting evening. Does he have a web page??