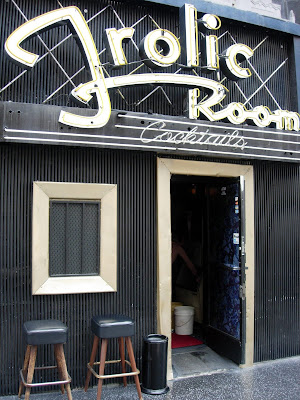 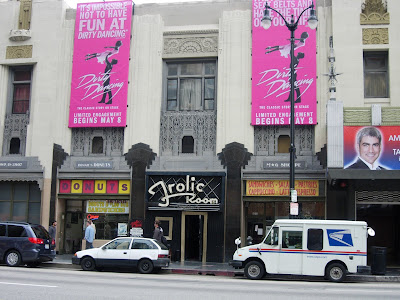 Bob's Frolic Room, Hollywood, CA
Because the bar is located next door to the Pantages Theatre you will often see a crowd of theatre goers around showtimes. This would be the place to grab a cheap drink before your show starts.
Inside is a mural of old cinema legends but beyond that there is nothing exciting worth writing about. This is a simple bar where people come to drink - not for a trendy atmosphere.
Posted by Robby Cress at 7:08 PM

I hereby give you the Splash Award for an inspiring blog!

Eeeh... did I read "Bob's Frolic Room"? Is it just in Sweden "Frolic" is a brand of dog food? Don't sound very classy at all!

antheIt's not a hand-painted mural on the walls of the Frolic Room but some wallpaper of Al Hirsfield caricatures. It's charming though. The light fixtures are great and, of course, the signage is superb!