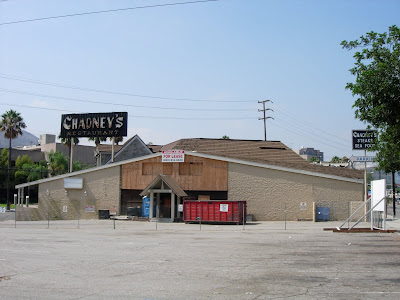 Chadney's Restaurant in Burbank, CA
Right across the street from NBC Studios in Burbank, CA is a shell of an old restaurant. Once a lunch spot and after hours hangout for NBC staffers, Warner Bros. employees, and workers from the Disney lot, the restaurant has been sitting vacant since 1998. Whenever I drive by the place I think of all the stories that could be told of the restaurant from when the times were good.
Chadney's Restaurant started in 1974 when former Sportsman Lodge pianist, Bill Chadney, joined up with contractor Bob Hoeller to open a steakhouse with live music. During the day the restaurant offered up juicy steak lunches for the nearby studio workers and at night a hoppin' jazz lounge for the after work crowd. 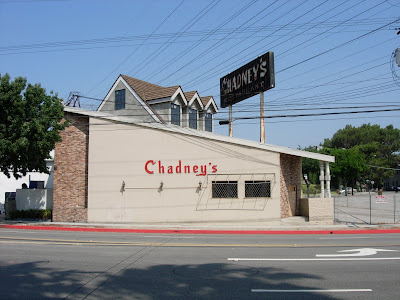 A view of Chadney's looking from NBC Studios, Burbank
Hoeller was quoted in a 1999 Los Angeles Times article saying, "I used to see Johnny Carson, Tom Brokaw, and Bob Hope in here all the time. And I used to watch Milton Berle stink the place up with his cee-gars. He was big on cee-gars." I wish I could have walked in to Chadney's for a nice steak dinner when that was the crowd coming in. I think I could put up with the cigar smoke if it was coming from Milton Berle. 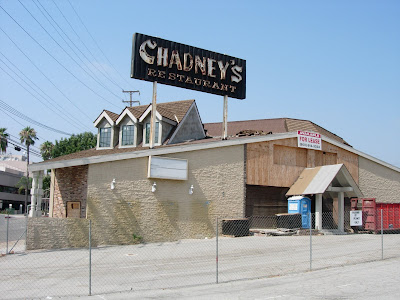 Chadney's Restaurant in Burbank - NBC to the Left
Business was good at Chadney's from the 1970s into the 1980s. The celebrities and workers were coming in. The big names in jazz came to perform - then business started to trickle off. By the late 80s the popularity of the place began to wear away and eventually Chadney's was sold to new owners in 1992. The new owners tried to keep Chadney's going but the big names had stopped coming. In 1998 the roof caved in on the restaurant and the place has been closed ever since.
Currently the building is up for lease and it has been this way for a long time now. I'm hoping somebody comes in, refurbishes the place and opens it as a new restaurant. However, I wouldn't be surprised if someone buys the place and tears the whole building down. Let's hope that someone can breath some life into the old restaurant!
Posted by Robby Cress at 11:26 AM

Yes, this place reminds me of another old NBC hangout, now gone, called the Copper Penny. Changing gears, do you by any chance know anything about an old beach club from the 20s in Santa Monica that was called The Gables. There's still a mosaic sign for it on PCH, I researched it a bit online and all I can find is that it existed briefly but am trying to figure out how/when it burned down. It's something of a local mystery.
Best,
Marty

I've seen a couple old photos of The Gables club in Santa Monica but that is a place I'm really not too familiar with - although, I would like to learn more about the place myself. If you do learn more on your research please report back!

I used to go there with an old Disney animator. Very old school and swank with the big booths.

Does anyone remember the little french restaurant on riverside in burbank/toluca lake that closed back in the 90's? Anyone remember what it was called?

Wow, This is amazing. Thank you for posting the history. My name is Chadney and I am named after that restaurant. My parents, both Burbank High Alum, had their first date there March 10th 30 years ago. After my parents were married, and my mom got pregnant, my mom drove down olive saw the sign said Chad if it is a boy or Chadney if it is a girl. I come by the old place as often as I can. I was able to get the original stain glass from the front door. I would love for someone to reopen it. There is so much Burbank history in that place. Thanks again for posting this.

Great story Chadney! And pretty cool that you were able to get the original stain glass from the front door.

I see there is no mention of Marty Steinberg as owner of Chadney's. He was my mother's boyfriend at the time and I remember eating there many times. I think this was in 1975/76 and I was about 17. Am I mistaken or was Marty one of the owners?

Bill Chadney is my Grandfather. My dad was the head chef in the 60's and met my mother there, who was working as a waitress. I believe Bill was the only owner until it was sold in the 70's.

I worked there in the 70's and 80's.I'm having trouble posting on here.

I think the French restaurant on Riverside wa Maison Gerard

Well, I miss Chadney's too! It was a wonderful restaurant that served delicious food. My name is "Kitchie" and I worked there for 24 years...Hi Cheryl...you were a killer waitress...and a nice lady...hahaha...Sadly, both Bill Chadney and Bob Hoeller have passed away..It had been the Carriage House before and became Chadney's in '74...I do believe that the Chadney's that Bill's grandson is referring to was originally on Ventura Blvd...then they opened the one in Burbank, while Evie Hoeller ran the one on Ventura which eventually closed.
We had wonderful Garlic Bread and always fresh fish, delicious Prime Rib, fresh salads...food that's hard to find today!

Hey Kitchie! How do I get ahold of you?
I worked at the Chadneys on Ventura before the one in Burbank and it belonged to someone else. Evie had the Essence Inn a few years later. I worked there too.

Hi Cheryl...Trying to think of a way to give you my email addy....I do keep in touch with some of the people who worked there. It was the Carriage House before Bill & Bob bought it. (Mind you, I'm talking about the restaurant in Burbank)Hey Robby...Marty was the host when I started in '73...Bill & Bob bought it in Jan '74...Jack Blue was the owner til then...He then opened a bar/restaurant on Sunset & Vine later on...Kimmee Lee was the chef until Mats Fahlstrom came in...Another chef Richard (Dick) worked at Chadney's & we had worked at the Meat Rack, later it became Maison Gerards on Cahuenga & Lankershim...owned by a bunch of actors/actresses...Dionne Warwick being one. Dan...Bill always had ME wait on him & Mama & Pappy Chadney always asked for me...I waited on the family when they came in after Bill's funeral...Bill & Bob were always good to me...I LOVED working there!

Adriana, Mine is henningtons@mainstreetcom.com. I don't think that many people will read this anyway.I really can't get much more spam than I already do.

I too worked at Chadneys from 1975-1982. Many good memories and friendships were made there with staff and patrons. Kitchie was one of my favorite ladies. I miss the friendships and good times. My son, who also worked there, and I often talk about those days. Tonight I am cooking Chadney Chicken for dinner. I wonder how to make the good Chadney's garlic bread. ?? Anyone know?

Sandy, I don't know the recipe for Chadney's garlic bread but it was really similar to the Smokehouse garlic bread and that's available online. Are you the Sandy who managed it when I was there?

Hi Sandy and Cheryl...maybe we can all get together soon...Sandy...I have the same phone #...lol???
Cheryl...I'll email you tonite...I still keep in touch with Arlene and Betty and some of the customers....Sandy, where is Craig working? Are you back in LA area?

How fun it is to read your posts, especially finding out some of you have worked together so many years ago! As a former bartender and waitress, I would love to reconnect with my co-workers! How cool is that?!

I came on here because I'm researching for my book about the Robert Blake murder case. He met his late wife at Chadney's in late August (or maybe early September) of 1998. I would like to speak to anybody who may have been there tht night, or worked there around that time so I can describe it as accurately as possible.

Were any of you there around that time? Or maybe you know someone who was? The book is currently being considered for a movie and I would acknowledge anybody who could help me out!

Thanks in advance for any help you can give me!

KitchieI have fond memories of you, and the entire staff. After all you did deliver $5,000 to me from wining the Super Bowl pool. So happy to know your still
enjoying life.

I went to Chadney's for over 30 years. My favorites were the Filet Mignon, Open-Steak Sandwich with the twiced baked potato and of course the Chadney salad dressing. I would drive out to the valley and pick up a couple of jars at the front register that were in the little refrigerator on the counter. The last times we were there, we through my mother's 75th and 80th birthday parties upstairs. The good news is my mother is alive and well and with God's help, will be 97. The bad news is that I miss that amazing blue cheese oil salad dressing. If anyone knows the recipe or anything about it, I would be so greatly appreciative. Here's hoping, fingers crossed :)

I don't have the recipe for the house salad dressing but if you can get a garlicky Italian dressing and put some bleu cheese crumbles in it. It will be fairly close.

I just posted a review of Chadney's written by my father in 1968 from the Valley News. It's on his blog: http://www.halbates.blogspot.com/2014/07/hal-bates-chadneys-offers-guests-aura.html

That's great. Thanks for sharing the link!

My Uncle, John Purnell, worked at Chadney's on Ventura Blvd in the 70's. He was a bartender...great guy! Anyone remember him, or anything about him? Thanks, Steve E.

I love your story :)

It was Cafe Francais (my favorite place) now it's Boston Market :(

I worked at Chadney's on Ventura around 1970 as a bartender with Tommy. Those were great times back then!!

I remember John. He worked at the Santa Monica Chadney's then took my place at the Ventura store later.

Thanks Jimmy, John was a great guy. Those were some awesome days to live in So. Cal.!