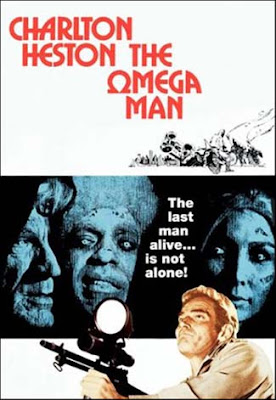 Recently I tracked down the filming locations for the Charlton Heston movie The Omega Man (1971). This apocalyptic thriller based on the 1954 novel, I Am Legend was done once before as a movie for Vincent Price (The Last Man on Earth) and again a couple years ago as a movie for Will Smith (I Am Legend), but it is the Heston version I enjoy most. It is not that the Heston film is a better interpretation of the story - no, what I find most interesting about this version is that it uses Los Angeles as a backdrop.

Olympic Theater, 313 W. Eighth Street, Los Angeles
Charlton Heston is the lone survivor of biological warfare except for a few other humans who have been mutated into flesh eating zombies sensitive to light. During the day, while the zombies hide from the light, Heston scavenges the city trying to track down their hiding place. We see Heston at the start of the film driving around the deserted streets of Los Angeles and one of his stops is at the Olympic Theater located at 313 W. Eighth Street. Above is a screenshot of the theater as seen in the film and below is a photo of how the building appears today. 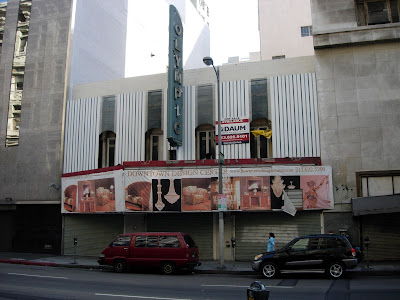 Olympic Theater, 313 W. Eighth Street
It's inside this theater that Heston watches the movie Woodstock. Because there hasn't been a new movie in the theater since human life was eliminated Heston is stuck watching this same film over again every time he goes to the theater. While watching the film he quotes the movie line for line. 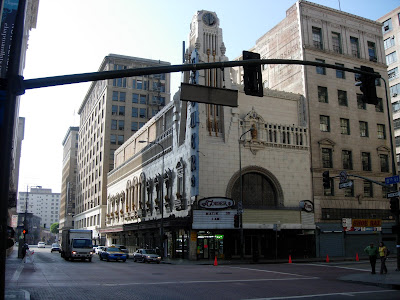 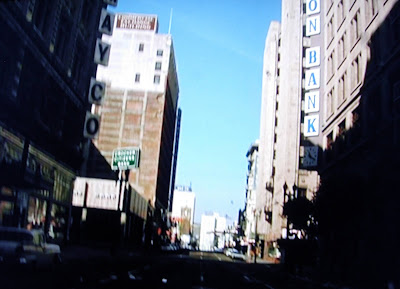 Above is a screenshot from the film looking down Eighth Street. Below is a photo I took of the same location today (8/9/2009). Notice the Union Bank building is now the Union Lofts and most of all, the skyscraper in the horizon that did not exist during the time of the film! 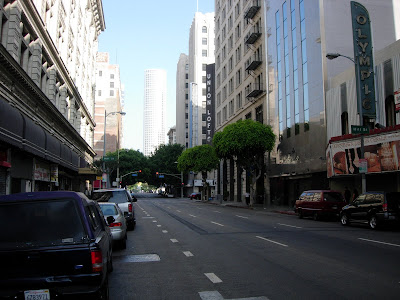 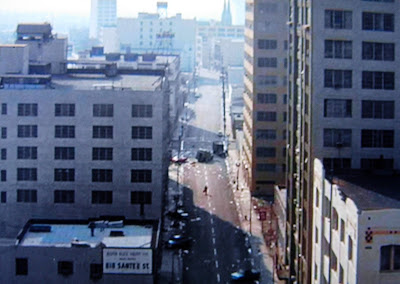 Looking down Santee Street, downtown Los Angeles
Above is a screenshot from the film looking down Santee Street in downtown Los Angeles. I wish I would have taken a photo of this location while I was walking around this part of town but I didn't recognize the location at the time. When I got home and looked at a larger version of the screenshot I noticed that the building on the lower left had an address painted on the side. I typed the address into Google maps and check it out - below a screenshot of the Google streetview. If you look at the windows of the building on the left and the far right you will notice that the same buildings are still standing. However, the two buildings in the near right appear to be torn down. Pretty cool what you can do with Google streetview huh? 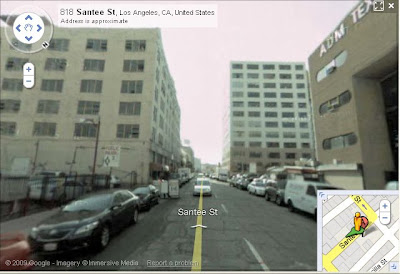 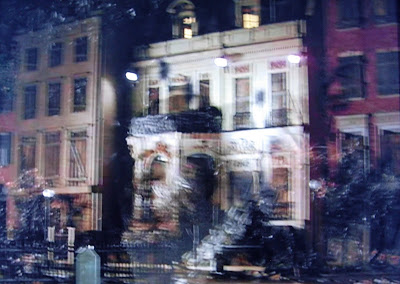 Heston's Penthouse
Above is a screenshot of Heston's penthouse apartment building. This is actually a facade located on the Warner Bros. Ranch in Burbank. Below is a great photograph from the website How The Ranch Was Weathered showing the same facade as it appeared in 2008. I just went by the ranch yesterday and it still looks the same. 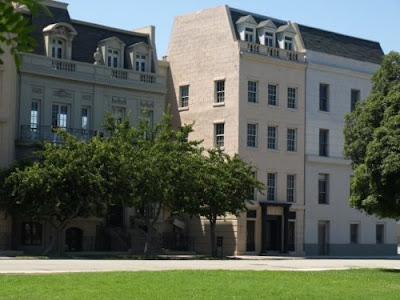 Heston's Penthouse - a Facade at the Warner Bros. Ranch in Burbank 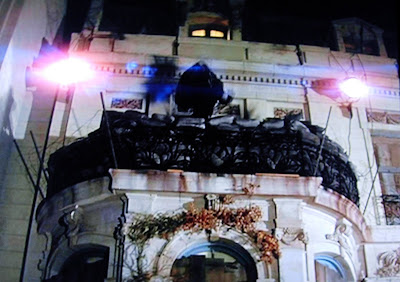 The Balcony of Heston's Penthouse as seen in The Omega Man 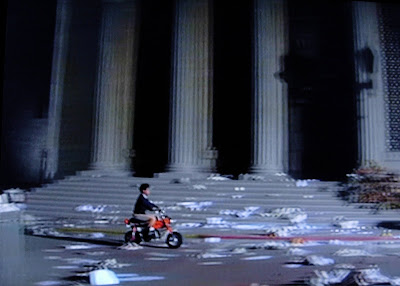 Ritchie finds the Zombie's Hideout
Later in the film Heston finds that there are a few other humans that have survived the biological warfare. One of these survivors is a teenage boy named Ritchie. Above is a screenshot of Ritchie driving his scooter to the hideout of the Zombies. Below is a photo I took of the same building a couple days ago (8/7/2009). The building is actually another facade, this one located at the main Warner Bros. Studio lot in Burbank. 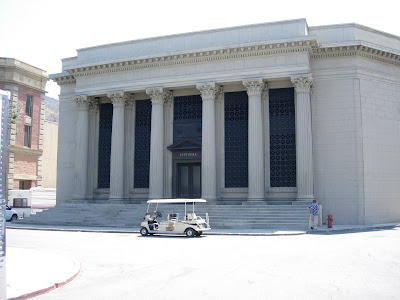 Zombie Hideout from The Omega Man, Warner Bros. Burbank
I walk by this facade about once a week. I've even taken my lunch break on those steps - so when I came to this scene in the movie I immediately recognized the location. This was probably one of my most exciting finds because it shows part of the Warner Bros. backlot almost completely unchanged after the nearly 4 decades since the film came out! 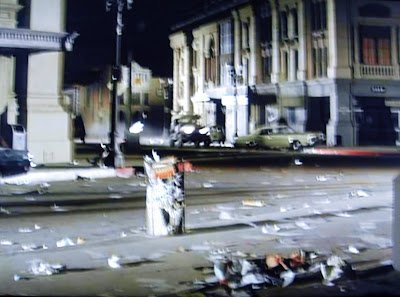 Car Chase from The Omega Man located on WB Backlot
Above is another screenshot of the Warner Bros. studio backlot in Burbank. This location can be seen during the end of the film when the Zombies begin marching down the street and Heston starts shooting up the place. Below is a photo I took of the same area of the backlot as it appears today. For a long time this street was used as Chicago for filming of the hit TV show ER. 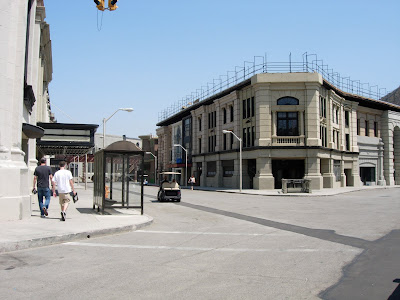 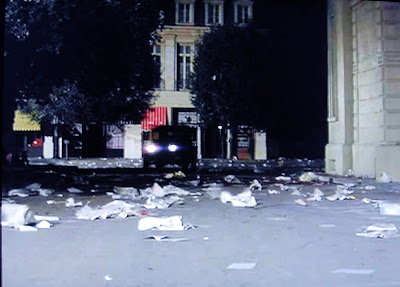 WB Backlot as seen in The Omega Man
Above is one more screenshot of another section of the Warner Bros. studio backlot in Burbank as it appears in The Omega Man. Below are the same facades as they appear today. 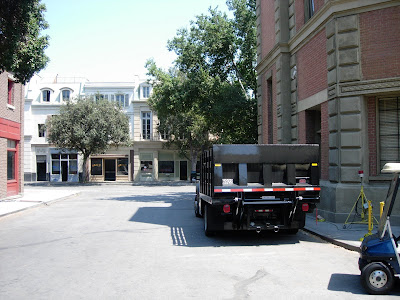 Warner Bros. Backlot, Burbank, CA
The Warner Bros. Studio backlot is not open to the public, however, if you want to see these same locations then take one of the WB studio tours. You will be able to see all of these backlot locations except for the location of Heston's penthouse which is at the Warner Bros. Ranch. Unfortunately, they don't do tours of the ranch to my knowledge.
Posted by Robby Cress at 1:44 PM

What a neat idea...I haven't seen any other versions of this one..would you say they're worth checking out?

Very interesting to look at the photos you took...seeing what's still there, and what isn't.

"The Last Man on Earth" starring Vincent Price is a very low budget B movie. I don't think the film is all that good, however, as huge fan of Vincent Price I enjoy watching the film for him alone. "I Am Legend" with Will Smith is a big budget thriller and in my opinion the best of the three. Perhaps a good movie to save for scary month of October :)

Hi Robby,
I agree with you ... the Will Smith version is the best as a movie, but there's something about the Omega Man that just feels the the genuine article. Thanks for pointing out the backlot images ... strange how so much can be shot on that WB backlot and still I don't recognize it until it's pointed out ...
Best,
Marty

Ooh, dig this! Omega Man was one of the scary movies of my youth. Those zombies really freaked me out when I was little. It's neat to see all those places still standing.

I loved this movie as a kid, and it seemed like it was always on TV during a Saturday or Sunday afternoon. I have the soundtrack, which immediately came to mind when I saw this post. Great job with this.

And I refuse to watch any other version of this story.

Fantastic work! The WB backlots seem more clean today than in the 1970's... he he. (Bad joke, I know. Blame it on too little coffee.)
Have to check that film out!

Thanks for the excellent suggestion. I'll probably do just that. :)

What is it with downtown and zombies? Did you notice the theatre where Thriller was filmed has the Thriller with Vincent Price on the marquee lately? I keep meaning to take a pic of it...I'm lazy like that.

Thank you so much for having the photos up for us to see. Wow! -- great collection, and our so lucky to have been able to wander and look at these areas of the studio. It's one of my most favorite films though it still scares me at 48 years old :) -- Scott

I would love to see this area I wish they would make it available for those of us that totally enjoyed the movie.

What an awesome site! I often wonder how these classic locations look today. The Zombi Hideout in Music Man is also the Gotham City Police Headquarters in the BATMAN TV series. Keep up the great work!

Really nice job, I've always wondered about that, thanks!

I've heard that the fountain in the park (as seen on Bewitched and Friends) is the same fountain featured at the end in The Omega Man. However, the fountain from The Omega Man is not only different from the Park's fountain, it's also much closer to the fence, just across the street from Heston's home in the film. I'm convinced the OM fountain had to have been temporary while the real fountain was covered in foliage.

Anyways I'm a huge fan of the novel, and I like all three films despite the fact that none does justice to the source. Omega Man is my favorite of them, and is the funnest, while I still enjoy much of The Last Man on Earth.

The Will Smith version is decent, but is actually more of a remake of The Omega Man than an adaptation of I Am Legend. The end credits even tell us the script was based on the Omega Man screenplay (OM screenwriters John William Corrington and Joyce H. Corrington are mentioned well before Richard Matheson's name appears ), and in the DVD features, the filmmakers speak dismissively about elements of the novel yet go on about how much they enjoyed The Omega Man.

After The Omega Man, Warner has been wanting another remake of The Omega Man for decades, and sadly not another (or proper) adaptation of I Am Legend.

The scene with the corpses on the roof of the building was shot in my building on Los Angeles St. between 7th & 8th. There is also a wide shot looking down from the roof to Main St. of Heston driving by.
There are also shots of him on Santee looking toward where it dead ends at 8th St.
I believe I discovered the garage where the cars were just the other day also in this same neighborhood.

good call on the fountain. There is a good pic of the park fountain with omega man building in the background on WB ranch website and it is some distance between the two.
Also the omega man fountain is much smaller width than the park one. Maybe they were originally going to use the fountain but decided that the distance to throw the spear from the balcony was a bit unrealistic so put in a prop fountain closer to the house.