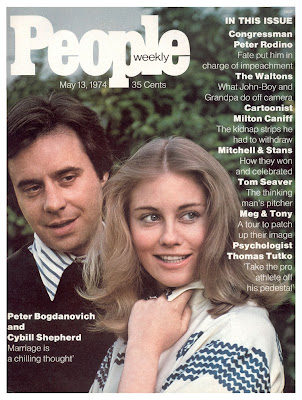 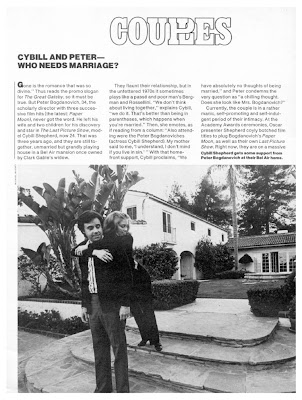 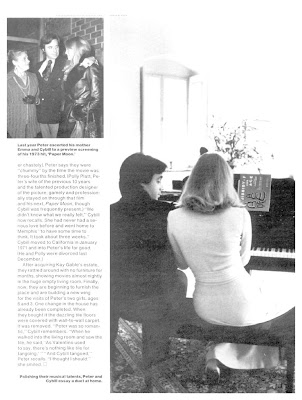 (c) People Weekly
Of course, we now know the relationship between Bogdanovich and Shepherd would not last either, but it's interesting to see how in love they were at the time. My favorite part in the article is when Shepherd says, "Peter was so romantic. When he walked into the living room and saw the tile, he said, 'As Valentino used to say, there is nothing like tile for tangoing.'" And the two tangoed.
Posted by Robby Cress at 3:51 PM

Very interesting, for me, especially about the Kay Gable part, as I collect on Carole Lombard. She must have owned this house before she married Gable and moved to his ranch in
Encino.
Robin

I ran across Clark Gable's Brentwood Heights home that is seen on so many postcards. 200 Bristol.

Thanks for this - I'm a huge Bogdanovich fan and I found this really interesting. Shame the public abandoned him: he should have become one of the legends.

I never knew that story re. how Cybill Shepherd and Peter Bogdanovich hooked up, that it was Peter's wife who saw a photo of Shepherd and urged him to cast her. Very much like Bogie and Bacall ...
Best,
Marty