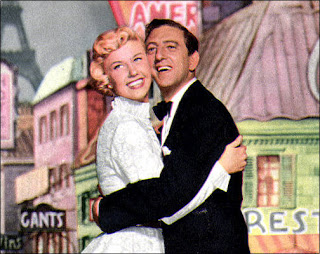 Doris Day & Ray Bolger, April in Paris (1952)
The first stars that come to mind when most people think of classic Hollywood male dancers are usually Fred Astaire and Gene Kelly. It's almost like a Beatles vs. Stones relationship. You're either in one camp or the other. Then you have someone like Ray Bolger, one of my favorite hoofers, who is often forgotten or less appreciated. To use the rock band analogy, Bolger would be The Kinks, that group where you go, "They did all that?!"
Bolger is usually remembered for his performance as the Scarecrow in the The Wizard of Oz. Another film you can see Bolger's fancy footwork where he is not made up in so much make-up is April in Paris, which also stars Doris Day. In the film Doris Day plays a chorus girl who is selected to represent the United States at an art exposition in Paris, however, the invitation was intended for Ethel Barrymore, not Day's character. Bolger plays a member of the State Department that made the mistake and tries desperately to correct it.
Although Day is clearly the bigger star in this film, two of my favorite scenes are song and dance numbers featuring Bolger. One has Bolger imagining himself as President of the United States and in another he is drunk on champagne and dancing in the kitchen of an ocean liner.
April in Paris is a Warner Bros. film and I believe one of the early scenes where Bolger visits a New York City theatre (the Knickerbocker) to confront Day about the mistake that has been made, was actually filmed on the Warner Bros. backlot. Below are images comparing the present appearance of this area of the WB backlot with the theatre as it appears in the film. This facade has been used numerous times in films, a few of which I have shown on this blog - check out my A Star is Born (1954) post to see this theatre facade used for Judy Garland's film premiere. 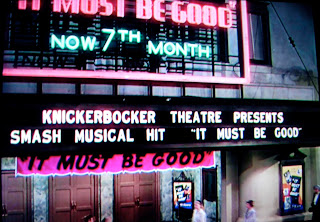 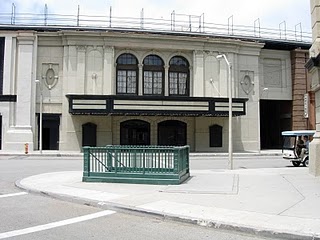 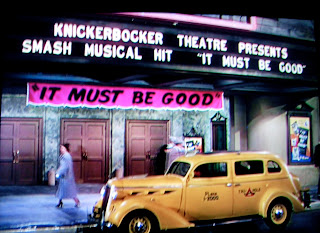 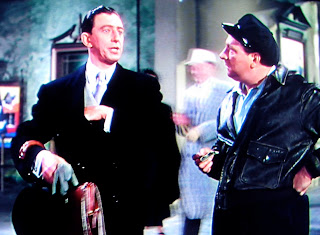 Ray Bolger outside the Knickerbocker
Posted by Robby Cress at 9:17 AM

A love that film! Ray Bolger was awesome!! Great post!

You are amazing! Your blog is incredibly fantastic! Thank you for ever one of your posts - I love them all!!!!!