Joan Crawford
Joan Crawford is one of the biggest and most glamorous stars Hollywood has ever seen, but her arrival in California was far from majestic. In 1924, MGM  executive Harry Rapf happened to catch a New York stage production where Lucille LeSuere (as Crawford was then known) was performing as a chorus girl. Rapf arranged a screen test for Crawford, but the results were negative. It would take a couple auditions before Crawford would finally be put under contract. In January, 1925, Crawford left New York City for California. She was twenty-one years old. 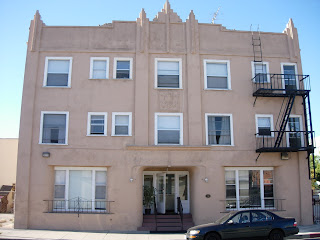 West End Hotel, formerly "Washington Hotel"
Crawford stayed at the Washington Hotel (now the West End Hotel), located at 3927 Van Buren Place, in Culver City. The modest hotel is only a few blocks from the former MGM lot (now Sony) so Crawford's commute to the studio would have been an easy walk. The hotel is a three story building with fifty-three rooms and is an architectural example of the Zigzag moderne style. It was built by R.P. Davidson in 1923, only a couple years before Crawford arrived, for Jessee M. Lewis, the original owner of the hotel. 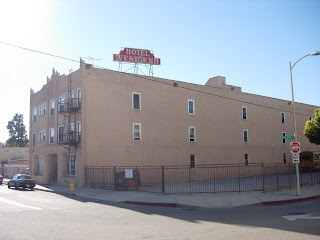 West End Hotel, 3927 Van Buren Place, Culver City
Crawford's first few months at MGM were a little slow. The studio didn't quite know what to do with their new find, who in 1925, was more of a dancer than an actress. Rather than wait for something to happen, Crawford took it upon herself to make something happen. She wandered the studio lot learning whatever she could: acting tips from other actors, make-up tips, from the make-up artists, how to appear best on camera from the many technicians. When she wasn't exploring the studio Crawford was out on the town socializing. Crawford often entered local dance contests and usually won. She did whatever she could to promote herself. 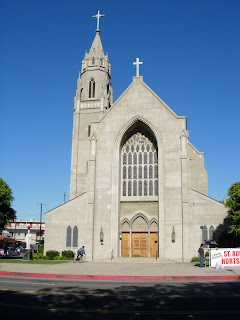 St. Augustine's Catholic Church
In addition to promoting herself, Crawford would make a stop each morning before going to the studio at the St. Augustine's Catholic Church, located directly across the street from MGM.  Crawford made a pit-stop to pray for her success in Hollywood. This was the 1920s, at MGM, where Crawford was competing against a large roster of stars including Norma Shearer, Greta Garbo, Lillian Gish and Marion Davies. Crawford needed all the help she could get. 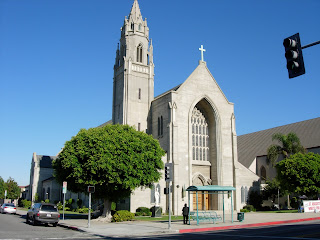 St. Augustine's Church, Culver City
Over time, the MGM executives would take notice of Crawford and begin throwing her in different films. They would soon be grooming her for bigger and better parts.
As Crawford began to settle in Culver City, she moved out of the Washington Hotel and in to a three bedroom bungalow on Genessee Street. She would stay there a short while, until MGM loaned her $28,000 to purchase a house at 513 N. Roxbury Drive, in Beverly Hills. 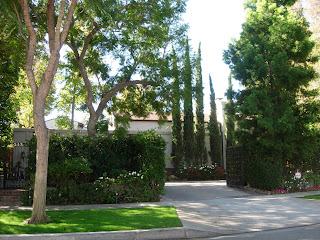 Joan Crawford's home at 513 N. Roxbury Drive
The home on Roxbury Drive was a spacious five bedroom, five bath house, located just a few blocks from the commercial part of Beverly Hills. Built in 1925, the home was originally owned by Herbert Howe, writer for the fan magazine Photoplay, and also well known for being Ramon Navarro's lover. Crawford lived in this home during the years 1927 and 1928.
Your thoughts?
Posted by Robby Cress at 9:52 PM

Robby,
No matter what has been written about her, true or untrue, she was a great movie star. When she is in a picture, you can't take your eyes off of her. She was dynamic. In the thirties, she was goergous!

Hi Robin, I couldn't agree more. Joan Crawford was incredibly gorgeous, especially in the thirties. It's a shame that the image many people think of right away is the exagerated "Mommie Dearest" version. And although she was no Bette Davis as far as acting goes, she was still a decent actress in my opinion.

Agreed. I always found her to be really capable, and often, excellent (Humoresque).

Robby, do you happen to know the street address on Genessee? I've always wondered and never have been able to find out.

Those dance contests Joan took part in were frequently at the Cocoanut Grove at the Ambassador -- and one of her regular rivals was a teenage starlet on the Fox roster named Carol Lombard (the "e" would come later).

TCM regularly runs a 1925 "tour" of the MGM lot as filler between films, and it shows Joan when she was still Lucille LeSueur.

Sorry, but I'm not sure what the street number was for Crawford's residence on Genessee. If I do ever come across it I will be sure to post it!

VP81955, I love those type of filler programs that TCM airs between programs. That tour of the MGM lot in 1925 would be a great video. I wish I could collect a lot of those studio video tours on one DVD.

Love it! I just finished reading "Possessed" the latest biography. Fab! Anyway, it talked about this dingy hotel when she first arrived and how she disliked it so. It's nice to see what it looked like!

Hi Katie, I'll have to check that biography out. I've read some others, but haven't gotten to that one yet. I'm curious as to what new info or anecdotes that version may contain.

RE Genessee Street: I know that Joan's stepfather in Kansas City, Harry Hough, had a house on 4407 Genessee, where Joan (then Lucille) would occasionally stay while home from the Rockingham Academy. I didn't know that there was also a Genessee in LA...