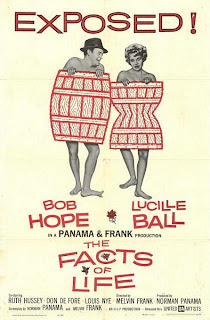 The Facts of Life (1960)
Larry (Bob Hope) and Kitty (Lucille Ball), both middle-class Pasadena suburbanites, are becoming bored with their predictable lives and their marriages. When Larry and his wife, Kitty and her husband, along with another couple plan a future trip to Acapulco, unforeseen events cause Larry and Kitty to spend all their time on the trip together without their spouses. A romance between Larry and Kitty ensues.
When the trip is over Larry and Kitty try to break things off feeling they have made a mistake, but when they return home they continue to try and see each other. In the end, after a little sneaking around together, Larry and Kitty realize that they still love their spouses. The two break things off for good but still continue to be friends.
I visited a few of the locations featured in The Facts of Life, but unfortunately, many of the sites seen in this film from 1960, no longer exist. Below are a few of the sites as they appear today. 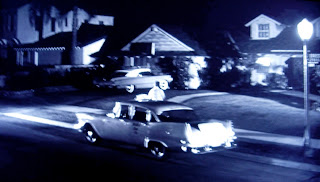 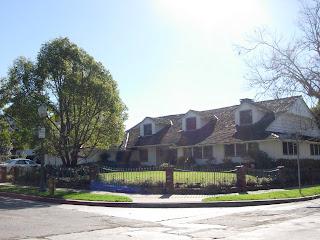 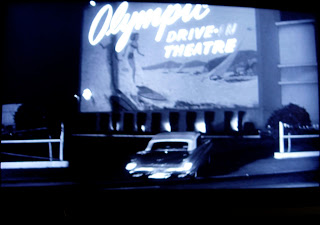 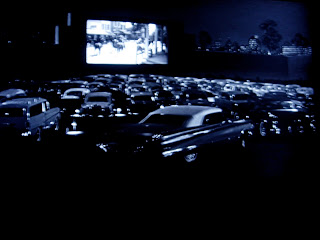 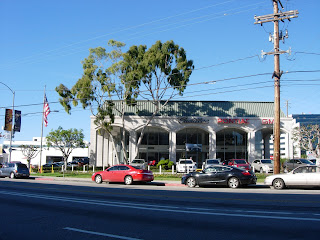 Former Location of Olympic Drive-In Theatre
During another night out Hope and Ball drive to a motel. As they are driving we see them pass many great mid-century motels lit by their neon lights. I've tried to find these motels but I'm sure they have all been torn down and replaced by tacky strip malls. One in particular I have wanted to locate is a "Topper" motel. The sign is shaped like a large top hat. There is one Topper motel in the Inglewood neighborhood, but the architecture of the building does not match up with the one in the film. I've also seen photos of a Topper motel that used to be on Ventura Boulevard in the Studio City area, but again, the architecture doesn't match up. If anyone knows more about these motels seen in the film, please share.
After Hope and Ball end up at a motel where they plan to "talk," Hope steps out to pick up some food to bring back to the motel. Hope stops by Johnie's Coffee Shop. Johnie's was located in Downey, California at 7447 Firestone Blvd and operated from 1958 until 2001. From 2002 until 2006 Johnie's was a used car dealership until it was illegally demolished in 2007. Since then, Bob's Big Boy has taken over the property and rebuilt the restaurant using original blueprints. Below is a screenshot of Johnie's from the film and photos of the rebuilt restaurant that is now being operated as a Bob's Big Boy. 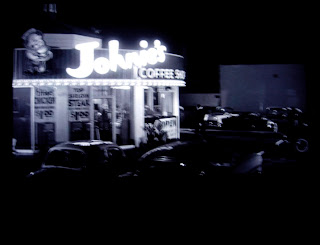 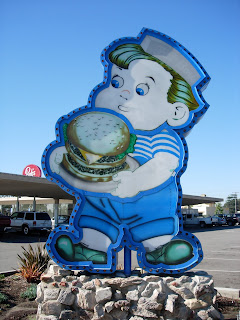 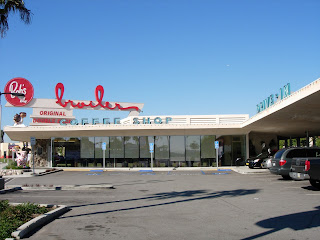 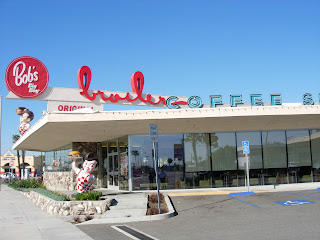 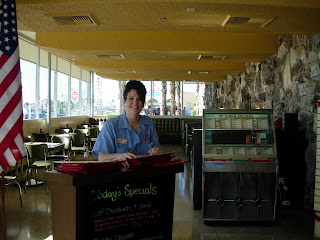 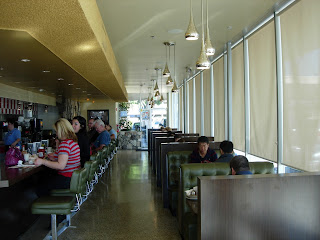 Looking down one of the lunch counters. 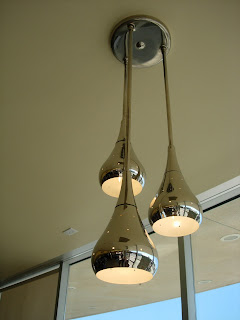 Lamps
The menu is now the normal Bob's Big Boy menu, so it is your classic diner fare. The atmosphere is like stepping into a time warp. You can see what the restaurant would have looked like when it opened in 1958 - not after decades of wear and tear. Like the Bob's Big Boy in Toluca Lake, it looks like the Bob's Big Boy Broiler has special events on different nights, such as Hot Rod Cruising.
Posted by Robby Cress at 12:03 PM

i really liked this movie- though at times i thought, "WHAT! those little scoundrels!", hehehe. :) but it's cool that you were able ot find the current Bob's Big Boy and that they keep a Johnie's Fat Boy logo... i'm guessing in teh parking area? great post. :)

This may be my favorite of all your posts. I particularly like The Facts of Life and it was a real treat to see the locations. And how cool that they remodeled the coffee shop and that you went! I'm so jealous.

Zinnia, I felt the same way. I couldn't believe Hope and Ball were being such sneaks - but all ends well. As for the Fat Boy sign, they have it standing at the entrance to one of the driveways.

Raquelle, the coffee shop is pretty cool. It's a little out of the way from Los Angeles, but not too far. Apparently, even when the restaurant first opened in 1958 it was enough of an attraction that people visited from other nearby areas. I'm just happy that company like Bob's Big Boy resurrected the old Johnie's location.

This was the first live-action movie I ever saw in a theater, when I was about five years old or so. Not that I had a huge hankering for Hope or Ball at that time (though I came to appreciate them later); no, I just came along with my older sister (she was 17), and saw it at the now-demolished Paramount on South Salina Street in Syracuse, N.Y.

Happy new year to all.

Thanks for keeping the past alive.

Another brilliant bit of sleuthing Robby! As always many thanks.

Thanks for all the information! I understand that part of the movie was filmed on-location in Acapulco - do you know the name of the hotel, or were the hotel scenes filmed in-studio? Thanks again!

I love that you linked to our Downey Johnie's (now Big Boy) Broiler, but that Johnie's Coffee Shop in the film is a different restaurant elsewhere.

In 1960, Johnie's Broiler was named Harvey's Broiler. The name changed in 1968, so there is no way it was used as "Johnie's Coffee Shop" in this film.

There is a Johnie's Coffee Shop on Wilshire, but its building is not curved like in the screenshots you've posted. There could have been other locations, but Wilshire is the only one I know of.

Thanks for the details on the Downey Johnie's. Now I'll be back on the hunt! My first instinct was the Johnie's Coffee Shop on Wilshire, but that Johnie's was called Romeo's or Ram's in the early 1960s, and like you said, the architecture of the building is different.

The Downey Johnie's and the the Johnie's in the film both display the "fat boy" logo. I wonder how many Johnie's locations there were? The only two I've ever heard of are the Wilshire and Downy locations.

Another movie where they film on location all over Los Angeles is "Crime of Passion" with Barbara Stanwyck and Sterling Hayden. The comments below on that movie they talk about a drive in theater in the background that isn't there anymore.
I love old movies.