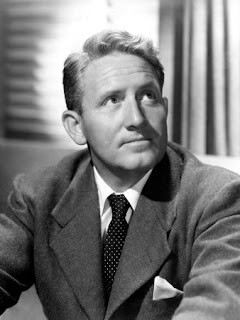 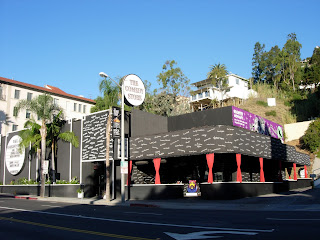 The Comedy Store, Formerly "Ciro's"
During the early 1940s, Tracy was a regular at Ciro's, the famous Sunset Strip nightclub located at 8433 Sunset Boulevard in West Hollywood. In fact every major star of the 40s, 50s and 60s went to Ciro's including George Burns and Gracie Allen, Humphrey Bogart, Joan Crawford, Lucille Ball, Desi Arnaz, and Frank Sinatra to name a few. In late 1940 early 1941 Tracy would sometimes bring his wife Louise to Ciro's but most often he brought along a young starlet. One night he brought Olivia de Havilland, James Stewart's regular date. Another night he brought the 18 year old actress, Judy Garland.
Rumors began to spread that the Tracys would separate, but of course, they never did. Even when Tracy's relationship with Katharine Hepburn got serious, Tracy still remained married to Louise. 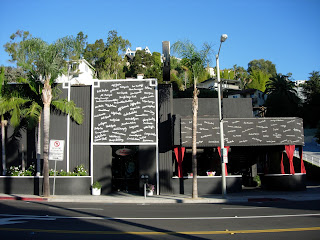 Another view of The Comedy Store
Above are photos showing how Ciro's appeared around the time Tracy would have been a regular and how the nightclub appears today. The building is now and has been since 1972, the home of The Comedy Store.
Posted by Robby Cress at 7:20 PM

Robby,
Great post. Gable and Lombard were there alot, too. Didnot realize the building was still there. So glad it is!

I had heard the name many times..Ciro's..and it's great to see that something is still on the site. There's not much sadder than to see, say the site of the mansion in Sunset Boulevard, and realize it's long gone.

As a Canadian, I was shocked and appalled that Pickfair no longer stands! Mary Pickford and Douglas FAirbanks ghosts must be in a rage.

Katharine Hepburn seemed to me to be asexual--at least from middle age on. I would be surprised to learn that she had a sexual relationship with Tracy or any man.

Ah HA! So *that's* where Ciro's used to be! I've been wondering this for ages, thanks so much for posting! I have a new reverence for The Comedy Store. (even though I can's stand the place, myself!)

Sorry I haven't stopped by the site in a long time-- it's still looking great as always!