The Hollywood Bowl - Music Under The Stars 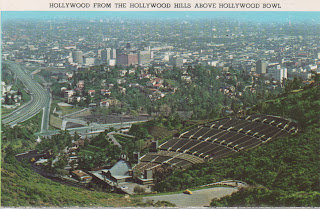 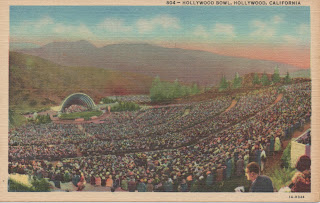 An early postcard view of the Hollywood Bowl
Like so many other Angelenos, for me, attending the Hollywood Bowl is developing into an annual summer time experience, although I'm still learning some of the tricks to make the most out of a Hollywood Bowl show. Some attendees arrive to the Bowl early bringing a full picnic spread which they lay out in one of the tree covered spots on the Hollywood Bowl grounds. Attendees come with packed coolers and picnic baskets filled with their favorite libations and yummy bites. The grounds surrounding the bowl feel very woodsy, almost like being on planet Endor, you know, where the Ewoks live in Star Wars? It feels like an escape from the city and the perfect getaway for a picnic. (Excuse me while I slide my glasses up my nose after making that nerdy comparison). If you don't bring your own picnic basket, the Hollywood Bowl does sell picnic baskets which you can order.
By the way, if you visit the Hollywood Bowl, it is worth taking the time to look at "The Bowl Walk" exhibit.  There are ten stations around the Hollywood Bowl park area displaying images and information on the cultural events and history of the Bowl. 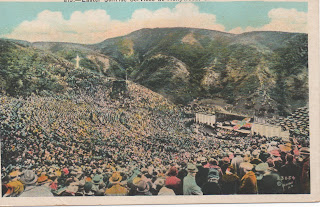 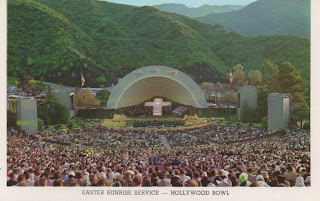 A later view of the Bowl hosting an Easter service.
There have been several different shells at the Hollywood Bowl. The first shell was built in 1926. At that time the grounds were regraded and the wooden benches were replaced by permanent seating. Although the upgrades to the Bowl provided more seating, the acoustics were diminished by the regrading. Lloyd Wright, the son of Frank Lloyd Wright, was hired to build a new shell. Wright had previously built sets at the Bowl for various theatrical productions and for the shell he designed for the 1927 season, he recycled wood from a Robin Hood set to build a pyramid structure that was supposed to improve the acoustics and complement the rustic setting. Wright's shell was demolished at the end of the 1927 season and in 1928 Wright was hired again to design a second shell. Wright's second shell had a more modern design popular during the time period, however, like Wright's previous shell, his second would also be demolished at the end of the year. 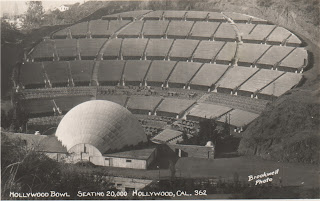 Vintage postcard image of the Hollywood Bowl.
There would be several different versions of the shell at the Hollywood Bowl. The current shell, built in 2004, incorporates elements from some of the previous shells but also integrates the latest state-of-the-art lighting and sound technology. 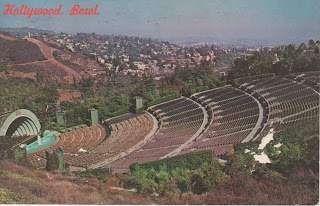 Looking east across the Hollywood Bowl.
THE HOLLYWOOD BOWL IN THE MOVIES
Several classic films have featured The Hollywood Bowl as a location including A Star is Born (1937), Champagne For Caesar (1956), Hollywood or Bust (1956), Moonlight Murder (1936), and Two On A Guillotine (1965) to name a few. My favorite films that feature the Hollywood Bowl are two classics from the 1940s: Anchors Aweigh (1945) starring Frank Sinatra and Gene Kelly and It's A Great Feeling (1949) starring Doris Day, Jack Carson, and Dennis Morgan. Below are some screenshots of the Bowl from Anchors Aweigh and It's A Great Feeling. 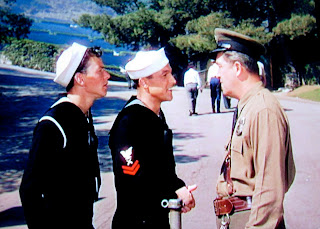 Frank Sinatra and Gene Kelly try to get into the
Hollywood Bowl in Anchors Aweigh (1945). 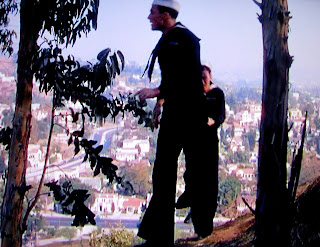 Sinatra and Kelly sneak into the Bowl by
climbing up the back hillside. 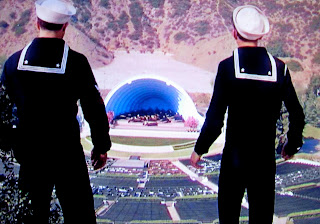 Kelly and Sinatra looking down at The Hollywood Bowl. 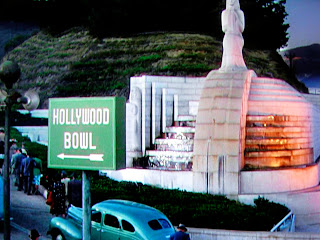 The entrance to The Hollywood Bowl as seen in the
film It's A Great Feeling (1949). 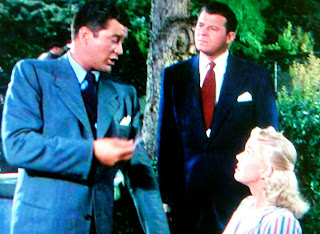 Dennis Morgan and Jack Carson both try to win
over Doris Day at the Bowl in It's A Great Feeling. 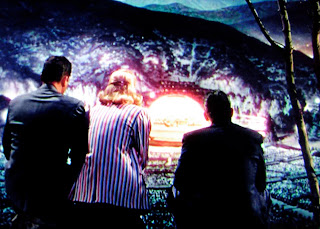 Morgan, Day, and Carson watching a show at the Bowl. 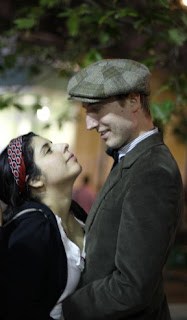 Wifey and Robby at the Bowl for
the Playboy Jazz Festival. 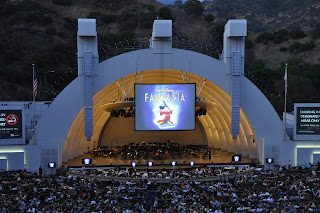 Fantasia at the Hollywood Bowl 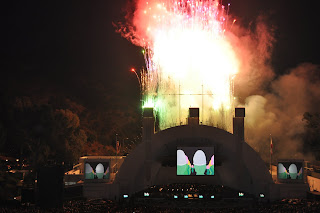 Fireworks during Fantasia at the Hollywood Bowl.
Summer is coming to an end, although, it certainly doesn't feel like it will be over anytime soon with how hot it is currently in Los Angeles, but there is still another month of performances at the Bowl. Visit the official Hollywood Bowl website to view the calendar of events by clicking here.
Do you have any fond memories or experiences from visiting The Hollywood Bowl? Do you have any tricks or tips to share for visitors?
Posted by Robby Cress at 10:32 AM

I was there last night for the John Williams concert! Which was great, and packed!

That's another show I wanted to see. I just finished reading your recap of the night and it sounds like it was a fun show. I love John Williams music.

Love the Bowl...I work there from time to time (yes, pretty neat!)...and this is a great list of movies that take place in/around there.

For anyone who wants to combine movies and the Bowl, the American Film Institute is doing a special "Great American Movie Quiz" night with Alex Trebek. More details on the night here: http://hbowl.com/AFI.