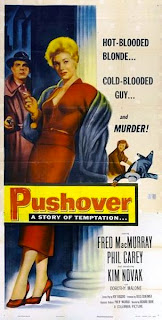 Pushover (1954)
In the 1954 film, Pushover, Fred MacMurray plays detective Paul Sheridan, a single, middle-age detective who falls in love with a bank robber's girlfriend, played by an irresistible blonde, Kim Novak in her first major starring role. When Novak learns that MacMurray is a detective, she uses her allure to convince him to kill her mobster boyfriend so the two can run away together with the robber's loot. MacMurray is a "pushover." He goes through with the plan but in the process of killing the mobster, MacMurray accidentally kills a cop. The suspense builds as MacMurray must deceive his fellow detectives and keep them off his tracks.
Pushover has often been compared to the earlier MacMurray film, Double Indmenity (1944), directed by Billy Wilder. Instead of an insurance salesman who falls for the wife of one of his clients, MacMurray is a detective who falls for the girlfriend of one of the crooks he is supposed to capture. Only in Pushover, Novak plays the femme fatale role that Barbara Stanwyck played in Double Indemnity. Although there may be many similarities between the two films, Pushover is an enjoyable noir thriller that is a classic in its own right. 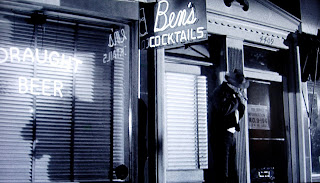 Ben's Cocktails, Magnolia Blvd, Burbank, Ca
The film opens with MacMurray first meeting Novak in a movie theater parking lot. That movie theatre was the Magnolia Theatre located at 4403 West Magnolia Blvd in Burbank, California.  In the opening scene we get a glimpse of a bar called "Ben's Cocktails" (see screenshot above) which was located next to the theater. I'm not sure if Ben's was a real bar or not, but the building has since been demolished as you can see in the photograph below. The old Magnolia Theater building is still standing and can be seen on the right side of the photograph. The Magnolia Theater closed in 1977, but then operated as a recording studio. The building currently appears to be available for lease. 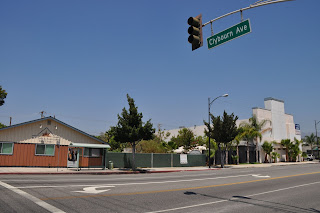 The Magnolia Theater is on the right. 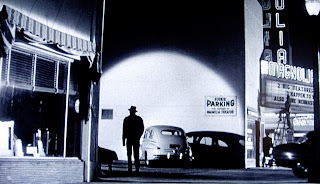 The parking lot next to the theatre where MacMurray meets Novak. 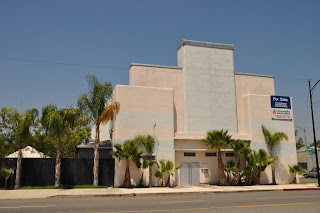 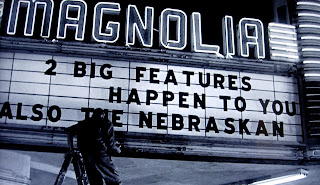 The Magnolia Theater marquee as seen in Pushover. 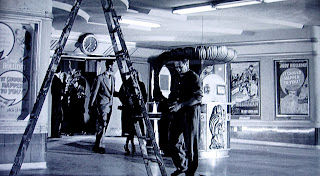 Patrons leave the Magnolia Theater in the film Pushover.
The police department that is seen in the film is the Burbank City Hall building located at 275 East Olive Avenue. Construction on this beautiful art deco building was completed in 1943 and was funded by the Federal Works Agency, Works Project Administration (WPA) . The outside of the building features bas relief sculptures, many art deco details and a gorgeous fountain. The inside features large murals by the painter Hugo Ballin, who also painted murals in the Griffith Observatory. 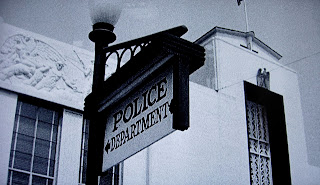 The Police Department in Pushover. 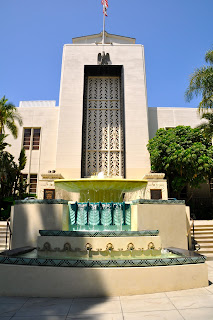 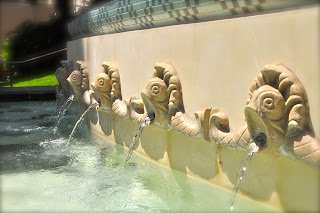 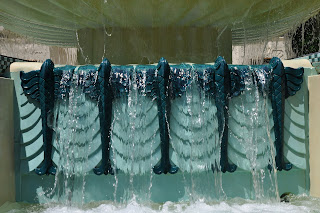 Flying fishes on the fountain outside Burbank City Hall 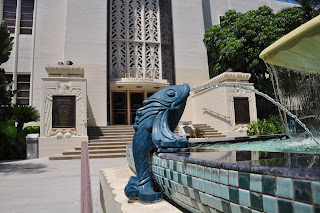 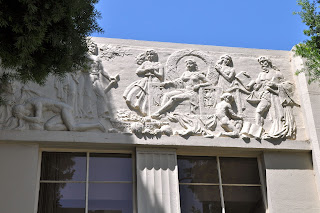 A relief sculpture on the side of Burbank City Hall
If you haven't seen Pushover, the film is available on home video.
Posted by Robby Cress at 4:41 PM

No, you're right. This was being debated on another blog and it turns out your address for the theater is correct, so kindly diregard my earlier comment. :-)

Plese disregard my previous comment about the address of the Magnolia Theater. This was being debated on a Burbank facebook group and it turns out your address is indeed correct! :-)

Watching this movie tonight on TCM. Anyone know where Macmurrays's apt. bldg. is ? Address shows #3916 / D. And the little park at the end, where the shootout happens ? Probably in Burbank too