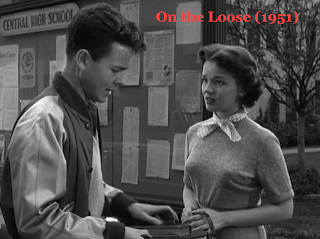 On the Loose (1951) is one of those 1950s films with a theme about juvenile delinquency. In this short B movie Joan Evans plays a neglected teenager who will do anything to get her parents attention, including suicide. Her aloof parents are played by Melvyn Douglas and Lynn Bari. This is one of those quick movies I'll throw on when I can't really make up my mind what to watch. It's not too long, can be easily watched in the background while doing something else (like playing with a baby on the floor!), and if I'm lucky, maybe I'll see some interesting film locations.

As for film locations, most of the action in this film takes place on interior sets that were clearly constructed on a studio soundstage, but there is one scene that takes place outside a high school. In the film the school is identified as Central High School. In reality the school is the Beverly Hills High School located at 241 Moreno Drive. 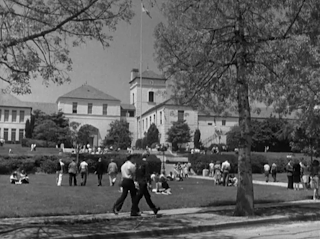 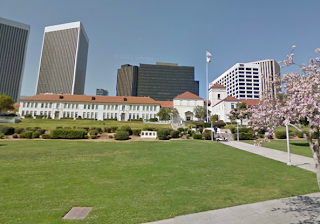 The front of the high school has not changed much since 1951. The most dramatic change are those high-rise buildings standing in the background.

I'm not sure if On the Loose is available on DVD, but if you are looking for some 1950s teenage drama, the film is currently available for streaming on Netflix.

I love exploring "B" movies on Netflix Instant...thank you for adding one to my queue! Really enjoy Lynn Bari so this one's a must for me.

I know, Netflix seems to have many "B" movies available that I probably wouldn't think to watch. I only wish Netflix could get access to some more of the lesser known titles that are just sitting around not being seen. But, I shouldn't complain - I have enough films I don't have time to watch.