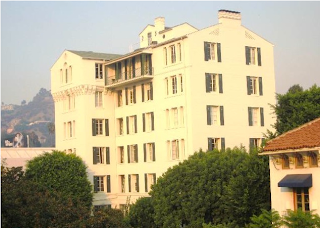 Built in 1930 and designed by noted Los Angeles architect Leland Bryant (Harper House, Savoy Plaza, Sunset Tower), the Colonial House has long been a home to celebrities. According to The Movieland Directory, some early Hollywood residents have included Clark Gable, Carol Lombard, Myrna Loy, Eddie Cantor, William Powell, and Norma Talmadge. Cary Grant, Bette Davis and Joan Blondell have also called the place home. Earlier this year even pop singer Katie Perry purchased a place in the Colonial House, continuing the building's legacy for being a home for stars.

Listed in the National Register of Historic Places, the property features wrought-iron fixtures, gardens, a swimming pool, library, arched doorways, custom built-in cabinetry, wood-paneled elevators, a terrace and includes views of the mountains and Hollywood. The elegant Colonial House is conveniently located near the nightclubs on the Sunset Strip, is just a short drive to the premium shopping in Beverly Hills, and central to the many movie studios in the area. It's no wonder why so many stars have chosen the Colonial House as their home.

No doubt a place like the Colonial House must have many great stories.  A couple stories I'm familiar with involve actresses Joan Blondell and Bette Davis. 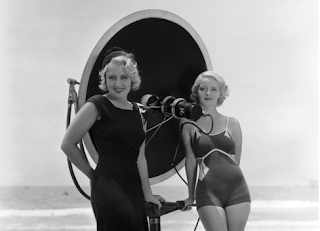 In 1960, Joan Blondell, who was 54 at the time, left her Sutton Place apartment in New York City and moved back to California, finding an apartment in the seven-story Colonial House. Most of her family were in California, including her grandkids and many of her close friends. One of her longtime friends, former neighbor Frances Marion already lived in the Colonial House and the two would reunite their close friendship. Joan and Frances would catch up every afternoon at five over cocktails with some of the other female tenants which included newspaper columnist Jill Jackson, publicist Maggie Ettinger, and stockbroker Flora Marks. 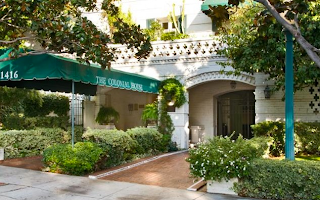 Entrance to the Colonial House. TopLACondos.com

Not long after Joan moved in she found herself busy with work on television, first as a rich widow on an episode of The Untouchables and then as a psychopath on the Barbara Stanwyck Show - both filmed at Desilu Studios in Culver City. Joan was also still working in movies too and when she would have to go out of town for location filming, her neighbor Jill Jackson would feed and walk her dogs, Bridey and Fresh. In his biography, Joan Blondell: A Life Between Takes, author Matthew Kennedy retells this story told by Jackson:

"Her life was those two ugly dogs!" said Jackson. To her consternation, "those damn dogs" only agreed to evacuate their bowels on the lawn of the nearby Christian Science church. 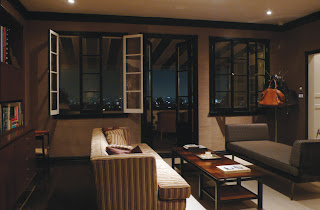 Bette Davis's former Colonial House living room as it appeared in 2009 when the unit was up for sale. (Gordon Thompson)

Bette Davis had many places around Los Angeles she called home at different points in her life. The Colonial House would be the last home she would live in. In the late 70s, according to the Roy Moseley memoir Bette Davis, the actor Roddy McDowall helped find her a place in Colonial House. Davis liked the apartment because it overlooked the La Ronda apartment house, where Bette and her mother first stayed when they arrived in California from New York. Bette wasn't a movie star then, but just a young woman ready for her big break.

Bette's apartment was on the fourth-floor and had large spacious rooms with twelve-foot high ceilings. She decorated the place with framed pictures nailed to the walls and with art books and family photographs on the tables. On the floor, on each side of a lattice doorway that led to the dining room, Bette placed her two Oscars which she won for Best Actress: one for Dangerous (1935) and another for Jezebel (1938). 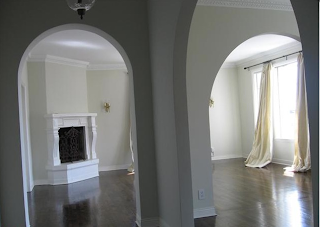 Moseley, who was very close to Bette in her later years, shares this story of one of his visits to Bette at the Colonial House:

"From her balcony you could see down to the swimming pool below. One day, Bette was leaning on the rail looking over at a corpulent man and his attractive family as they all swam and sunbathed. 'Look at that,' Bette shouted to me, loud enough for her voice to carry clearly down to the ground. 'Look at that disgusting man. It's revolting that a nice young girl and her children should have to be with such a fat, disgusting man.' I hoped they could not hear and tried to stop her, but she pretended not to understand what I was talking about."

Yikes! I picture dialogue like that coming out of Bette's character Jane Hudson, from the film Whatever Happened to Baby Jane? (1962). Much like Joan, Moseley mentions that Bette also enjoyed a good cocktail hour. Perhaps her tongue was loosened by liquor. 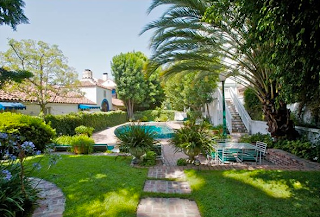 The Colonial House, like Leland Bryant's other West Hollywood apartment building, the Harper House, has also appeared on screen as a filming location. In the Broderick Crawford crime film, Down Three Dark Streets (1954), the Colonial House appears in a scene where Crawford and his FBI partner go to interview one of the residents as part of a crime investigation. 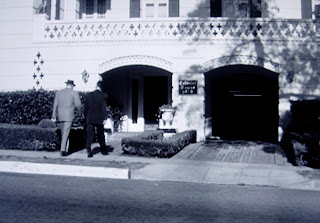 Broderick Crawford in the film Down Three Dark Streets (1954).

If you're now interested in moving into the Colonial House, you're in luck! There is a one bedroom unit on the first floor that is available for $1,275,000. For more information and photos on this unit visit the real estate listing here.
Posted by Robby Cress at 9:00 PM

Terrific post on this famous landmark. And great stories, too!

If there was an award ceremony for best classic film post of 2012, I would nominate this one because it's amazing. I never knew about this building or the stars that lived in it. That photo of Bette Davis' old apartment circa 2009 is pretty much what I would have envisioned a Hollywood apartment to be in the 1930s, 40s or 50s. In fact, I think that's what I envisioned my own first apartment to look like back when I was much younger. Ha! That story about Bette Davis making fun of the corpulent gentleman is hilarious. That's so Bette.

Thank you for this so interesting article . And great to be able to see Bette's apartment.

I lived directly across the street on Havenhurst. On Bette's 76th birthday in 1984, the USC Trojan Marching Band came down our street and played 76 trombones in honor of Bette. Shelley Winters also lived around the corner and I would see her several times a week at the local diner The Silver Spoon.