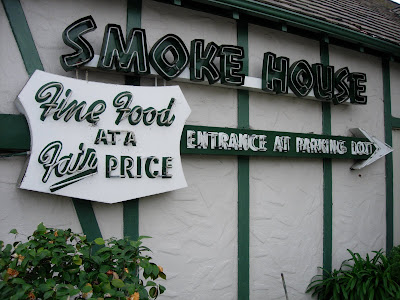 Smoke House Restaurant, 4420 Lakeside Drive, Burbank, CA
The Smoke House Restaurant, founded in 1946 at the corner of Pass Avenue and Riverside Drive, is one of the oldest restaurants in Burbank with a long going connection to the Hollywood crowd. When the original restaurant opened you could see such stars as Bob Hope, who was a Burbank resident, as well as Bing Crosby. Because of the restaurants proximity to both Warner Bros. and the Disney Studios you could see any number of stars. 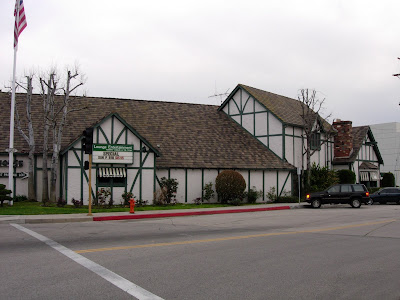 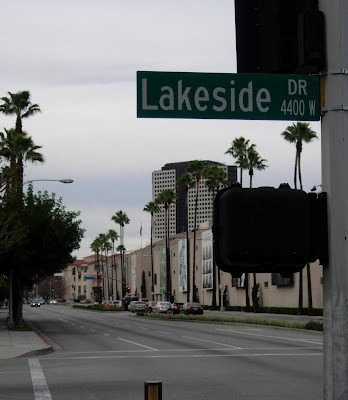 Across from the Smoke House is Warner Bros. Studios
Because of the restaurant's proximity to the Warner Bros. Studios, you could see any number of stars dining and imbibing at the Smoke House. It wasn't unusual to see stars like Errol Flynn, Milton Berle or Judy Garland. During the filming of East of Eden, Burl Ives would pick up his young costar James Dean and they would sometimes head to the Smoke House for lunch or dinner.
Many Disney animators and stars have also come to the Smoke House because of being close to work. One tragic Disney connection involves the legendary animator Wolfgang "Woolie" Reitherman, the man responsible for animating such characters as Goofy, Timothy (from Dumbo), Captain Hook, amongst many others. In 1985, Reitherman stopped for lunch at the Smoke House, then afterwards, he went to the bank. On his way home on the other side of Burbank, Reitherman crashed into a stop sign and a tree just two blocks from his place. Reitherman's body was thrown into the steering wheel of his Lincoln Continental. Almost 2 hours later, at St. Joseph's hospital, Reitherman was pronounced dead. 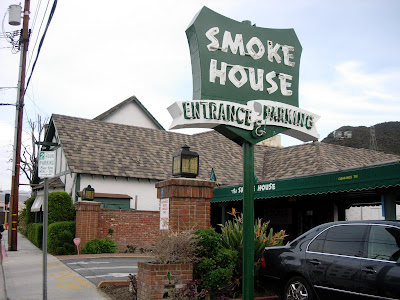 Valet at the Smoke House Restaurant, Burbank, CA
Even today the Smoke House Restaurant attracts stars. Andy Garcia and George Clooney are frequent visitors. Clooney in fact enjoys the restaurant so much that he named his production company after the business: Smokehouse Productions.
The restaurant has appeared to change very little over the years. The inside feels like you are stepping back in time, with the red booths and old-fashioned telephone jacks at the table (in case you got an important call). My favorite time to go is for Sunday brunch. It's a champagne brunch and includes many excellent choices beyond the usual brunch fair. No matter when you go you should try the Smoke House's famous cheese bread. It's delicious!
For more information on the Smoke House check out their official site here.
Posted by Robby Cress at 6:21 PM

Neat! I've driven by there many times, but never knew the history!

I can't believe the GARLIC BREAD did not get a mention. Legendary. My favorite Burbank haunt other than Pappoo's Hot Dog Show, Pecos Bills' and Chili John's. Thanks for posting this. You have to order a basket of bread and something stiff on the rocks.

What ever happened to the chateubrian for 2?
My grandfather Earl L White made the street it is on in 1919..