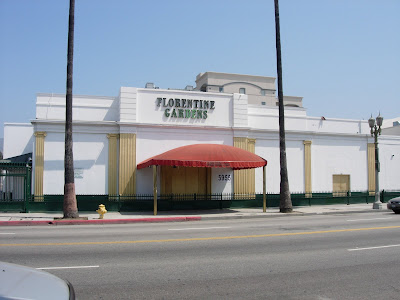 Great post! I've always dreamed of going to one of the old-time clubs where everyone dressed to the nines and there was live entertainment. The video was great - I love the grumpy old lady at the very end! Too funny!

I only knew that they used to have burlesque there- what a great history. Anytime I drove past it at night there was always a Latin club thing going on. Nice to see the building was/is still there. Are they still thinking of tearing it down?

There is an elderly showgirl I know who worked at both Earl Carroll's and Florentine Gardens. I'm gonna see what i can doing up from her and get back to you. Love to find the CD of that broadcast in the video too.

i drive past this building everyday and wonder what it is and what it used to be. it's been there longer than i expected.
I LOVE your site, too. thank you for the information!!

My Mother-in-Law was once named Miss Florentine Gardens during
1940's!! Her name at the time was Shirley Roybal, she was a professional dancer, and had a small part as a dancer in a Doris Day film called "It's a great feeling". Shirley (Roybal) McCullough recently passed away on Labor Day morning of 2009', we miss you very much Mom!
Love Monica McCullough
(Daughter-in-Law)

My Grandfather "Charlie" was a bartender there for many years back in it's heyday.

Apparently a lot of stars went there my Grandfather was friends with.
Apparently some scandals too, with some stars drinking too much and what not according to my grandmother.

I have some of the old 1940's fliers from the place with a few bare chested gals.

What a surprise... Who knew Floenrine Gardens has been around since the 1930's!! This is great information!! I only remember it being there in te 80's.

The Los Angeles Public Library menu collection includes a menu with wine vintages through 1933 that states "Without Dinner $1.00 Admission". They strongly marketed wine from "the Monastery of the Brothers of the Christian School" at Mont La Salle in Napa. Dinner prices ranged from $2.00 to $2.90

There are more stories about the Florentine and it's one time owner, Mark Hansen, on theblackdahliainhollywood.com site.

Thanks for all the great Hollywood history!

As of 10/11/17 looks to be doing fine as a dance club. The ghost of the Black Dahlia must, of course, be nearby, too. Hope she likes the music!