Universal Studios Courthouse Square is Back! 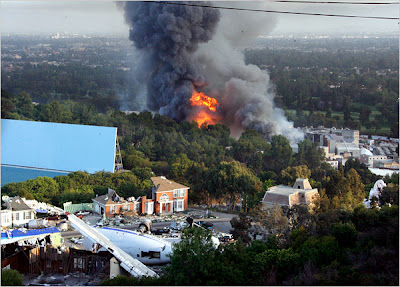 Universal Studio Backlot Fire - Photo from NY Times
Courthouse Square, one of the few backlot facades of Universal Studios Hollywood has been rebuilt after a fire destroyed this section, among others, during a devastating fire on June 1, 2008. Above is a photo from the New York Times the day the fire burned. The fire was an accident caused by workers using a blowtorch on one a rooftop. 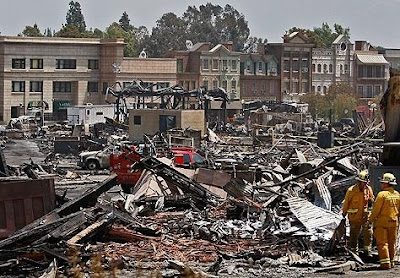 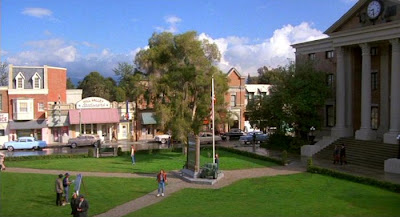 Back to the Future, filmed at Courthouse Square
Courthouse Square has appeared in hundreds of films and television shows dating back to the 1940s. Some of the productions that have filmed here include To Kill a Mockingbird, Bye Bye Birdie, and The Nutty Professor, but probably one of the most famous films set in this locations is Back to the Future as seen in the photo above. It's this courthouse where lightning strikes the clock tower near the end of the film. 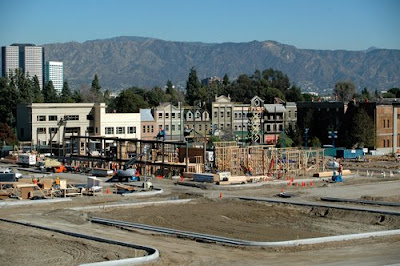 Universal Studios backlot being rebuilt.
On Thursday, Universal Studios reopened this section of their backlot, celebrating with a champagne toast and the USC Marching band which was an extra treat for the first visitors. Guests visiting Universal Studios can see the newly built backlot if they go on the park's famous studio tour.
Exciting news don't you think?
Posted by Robby Cress at 5:36 PM

Oh thank HEAVEN! I was *so* crushed when the wildfire destroyed that square-- Back to the Future being an all time favorite of mine.

I believe William Creber, the production designer for the original "Planet of the Apes" was brought in to design/supervise the restoration and recreation of the backlot area for Universal. Hats off to Bill!